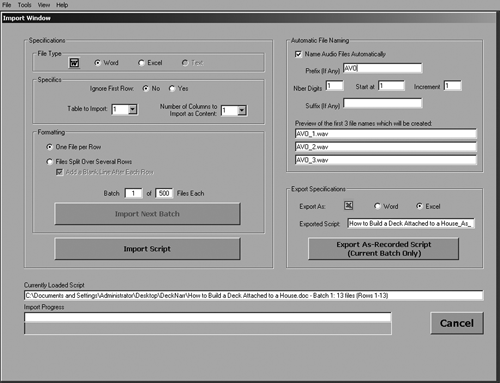 Once the audio options are set, it’s time to import a script in the Import Script window (see Fig. 3). Word2WAV currently reads scripts in either Microsoft Word or Microsoft Excel formats. MSExcel is commonly used for IVR and videogame production, allowing the writer to easily specify file names for each line or section in the first cell of a row. By popular request, Word2WAV will support Open Office documents in the near future, for those who prefer to avoid Microsoft software.

The basic format for creating a Word2WAV-compliant script is to create a tab-delimited table of three columns. The first column is for the file name, the second for the dialog, and the third for any comments such as direction. Any language that uses the Latin alphabet (English, French, Spanish, etc.) is recognized natively by the software. Asian and Cyrillic languages that use Unicode fonts will also work, but do require a different license. The manual goes into much detail about script formatting, but I had no trouble formatting prose into tab-delimited text in Word, then using the Convert Text to Table command to generate nice looking scripts. Each was imported without incident into Word2WAV, although in one instance Word2WAV found a problem in my script and reported that it had fixed it during import.

The Import window is also where you can turn on the Auto-Name function and specify a default file name for your recorded files. Word2WAV can import up to 500 lines of dialog at a time, or you can specify fewer. But it keeps track of how many you’ve imported from the total number of lines, so after the first set has been recorded you can quickly visit the Import window again and it will be set up to import the next batch of up to 500. You don’t have to specify the script file again, which is handy. Pressing the Import Script button does the deed, and if there are no troubles, takes you to the Recording window. 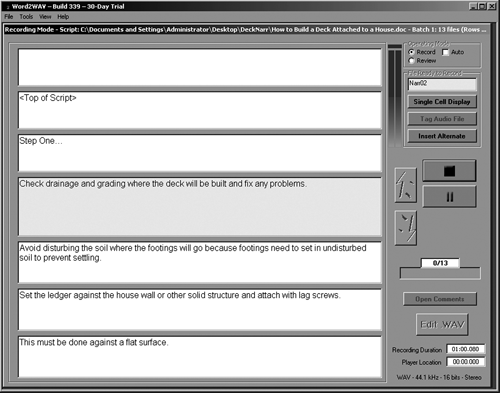 The Recording Mode is where most of the action is (Fig. 4). The bulk of the display shows each line in the script in a cell, with up to seven cells visible in total (you can set it to display fewer in the Setup window). The center cell shows the line about to be recorded, and the up/down arrows just to the right navigate through the lines of dialog (see Fig. 5).

The other controls on the right include, among other things, buttons to toggle between Record and Review modes, buttons for Record and Play, a level meter, a progress bar indicating how many lines of the total are done, and even an Insert Alternate button. This one allows you to record an alternate take, perhaps with slightly different pronunciation or wording. Word2WAV duplicates the line in the display, then gives the new recording the same name as the original line but appends “_Alt_” and a timestamp to the end. Even “bad” takes are saved; when you re-record a line, the previous recording is moved to a backup folder. In other words, everything is saved all the time, as far as I can tell. Nice.

When you click the Auto checkbox, Word2WAV will automatically advance to the next line when you stop recording the current one. A Re-Record Previous button lets you replace the last take, perhaps with a better one. Switching to the Review Mode (see Fig. 6) eliminates the Record button in the right-hand panel, since what you’re likely doing is listening to each line in turn for continuity. It also brings up two sliders: one for changing the playback tempo from normal speed to +200% (actually 4x speed), and the other for setting the delay times between playback of each line.

The Edit .WAV button in the Record window takes you to Word2WAV’s Editor Mode (see Fig. 7). The editing functions here are spartan but sufficient. Along with the usual horizontal and vertical zoom controls, plus Cut, Copy, Insert, and Delete functions, Word2WAV includes the ability to Crop, Insert Silence, Flatten Selection (which reduces the volume to zero), and even Record into or over the current file.

Several Batch editing functions are accessed via the Convert and Resample window (Fig. 2). In addition to the aforementioned Convert functions, you can also batch process all files using Normalize, or with Add Silence (which is convenient for working with video editors who like “handles” of silence on each end of their audio clips). The developer has added a button to engage a hiss filter, promised in a future release. 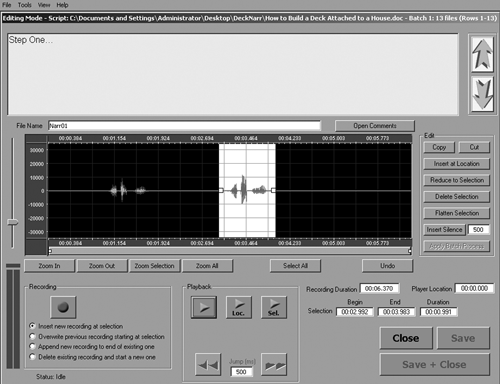 I gave Word2WAV a short but brutal workout over a dozen sessions while basically not reading, much less following the directions in the manual. That’s what we do, right? We dive in and we don’t RTFM. For better or worse, I tend to judge a software program’s worth based on how far I can get without cracking the manual. So I used a few microphones: a BeyerDynamic MMX1 USB headphone, my trusty Lawson tube mic and even Harlan Hogan’s signature MXL mic, both through a CEntrance MicPort Pro. Recording proceeded without incident, and the sound quality was as good as any editor I’ve used.

The documentation, available for download as a PDF on the company’s website, is highly detailed, well-written and, at over 50 pages, healthy. It does lack a proper index at the end, which I for one find very convenient in a long-ish manual. More importantly, the developer is highly responsive to communication from users, he updates the software regularly, and is developing a nice base of happy voiceover-actor-users.

Given that it serves such a niche market, I was curious as to how w2w came to be. The program’s developer, Hervé Chain, described his motivation for writing this delightful bit of software. “A few years back, I got fed up spending hours editing incredible numbers of small files for an eLearning course we were translating and recording in 3 languages, namely Arabic, Chinese, and French. So I wrote a basic program in VB6 [Visual Basic 6]. A year or two later, an English narrator saw it and told me there was a market for that application. I decided to refine it and try selling it. Right now, we are using it at the office to produce approximately 22,000 WAV files in Arabic for a 9-hour course. I think my AV guy would have quit without Word2WAV! It’s challenging and I like it.”

So do I, Hervé. So do I. Steve sez check it out. Word2WAV retails for $295 USD. For more information worldwide, visit www.word2wav.com.

January 01, 2007 8662
by Steve Cunningham Despite the fact that we live in an MP3, FTP, gotta-have-it-right-now world, I still burn through a lot of optical media every month. Compact disc masters for clients and demos for my agent, audio CDs for my...
Read More...
© 1988 - 2022 Radio And Production, LLC
Go to Top