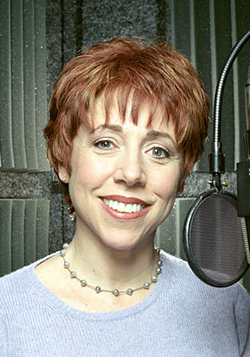 In RAP’s early years we featured an article from Susan Berkley who outlined eleven tips for making a great voiceover demo [January 1991 RAP]. Since then, Susan’s voiceover business has flourished, and she has taken her voiceover career into several directions including coaching and teaching. This month’s RAP Interview catches up with Susan’s successful career. We get some valuable tips on getting your own voiceover career off the ground, and we get some insights into the lucrative business of voiceover. Susan has lots to offer, and this interview barely touches the surface. If you like what you read, you’ll want to visit her website at www.greatvoice.com and/or drop her a line at the contact info at the end of this article. And yes, radio people can make it in the national voiceover business. Susan is one of us.

JV: You’ve been in the voiceover business for a long time. How did you get started?
Susan: I was in radio for fifteen years, and like many radio people, terribly underpaid and disrespected. But at one point of my career in the late ‘80s I was on the Howard Stern show doing his traffic, and the joke was that I didn’t get to do a traffic report. I think I did two traffic reports in two years. I became like a cast member of his show and had a lot of notoriety but wasn’t really making any money. So in 1987 I decided I was going to leave radio after fifteen years on the air and go into voiceover full-time because I had been doing some freelance and realizing that I could go into the studio for an hour and make almost as much as I made in an entire week on the radio. So I knew where I had to shift my career, and that’s basically what I did.

JV: And the voiceover evolved eventually into teaching and coaching and other things, correct?
Susan: Yes. I still work daily as a voiceover artist. I’m one of the voices of AT&T, and I’m the voice Citifone Banking, which are two of our biggest customers. But when I left radio I also started teaching. I took on some students, and as my own freelance voiceover career began to grow, so did the teaching part of it. So since 1987 I have trained well over a thousand people coast to coast in the methods I developed for doing voiceover and doing it successfully. And now I’ve got my own studio, we have eight employees working here, and we specialize in the voice prompt end of voiceover. We specialize in voiceover for telephony in all languages. So it’s not just me now. And then I also expanded the training division of my company, so it’s not just for voiceover but it’s also for presentation, public speaking, and voice for business. I work with companies and help them train their employees to have better communication skills.

JV: Where do you find the time to do all this?
Susan: It’s just starting to wear on me actually, but as you grow a business, you start to get a lot of leverage, and that has been wonderful. I’ve got an incredible team of people working with me, and together we were really able to grow the business. I wrote a book called Speak To Influence – How to Unlock the Hidden Power of your Voice. The revised edition will be out in the fall, and now I’m working on a voiceover book as well.

JV: What are your thoughts on the excess of people who have gotten into the voiceover business since the “guy/gal next door” voice became the big thing?
Susan: There’s a steady stream of people coming to me for training, and a lot of people say they want to do voiceover, but not everybody has what it takes to really do it on a professional level. Not that they don’t have the potential. I think people don’t realize what it really takes to attain mastery of the voiceover art. They think it’s all about talking. It isn’t. And it’s not even about having a great voice anymore. You need acting skills. You also need a tremendous amount of perseverance and marketing savvy. Those are the things I teach.

And it may now seem like there’s a lot more people in the market, and that might well be true; but I think there’s always been a lot of people doing voiceover, and it hasn’t just been a small group of people doing it all. Just do the math. Think about how many commercials there are. Of course, we’ll never know exactly how many commercials are being recorded everyday, but there’s some 10,000 radio stations in the United States. Say each one is running an average of 12 minutes of spots an hour? Take away that some of those are done by the production staff in the station who are not being paid extra for it, but the rest are being done by somebody. If you multiply that out, that’s hundreds of thousands of commercials being recorded every single day. James Earl Jones can’t do all those spots.

So yes, there are a lot of people breaking in and doing this. But not everybody is going to last. Producers are always saying they’re looking for fresh new voices, and they’re always going back to people they can count on in the studio. There’s a lot riding on making a right decision and a wrong decision when you hire voice talent. If you hire the wrong voice talent, it gets so embarrassing. I had a situation here where I was doing a local radio spot the other day. They wanted some incidental voices and said, “We have a very low budget. Can you call some of your students to come in and do this? You know, just kind of give them a break?” So they knew they were getting some new people, and I always love to give people a chance. I called a local guy in, and he just couldn’t do it. He couldn’t hack it in the studio. It was embarrassing for me, it was embarrassing for the client, and it was embarrassing for the guy.

So I think experienced voice talent or people who have been in radio for a while and have done a few voiceovers shouldn’t even worry about the competition because it’s easy to have a great sounding tape with the digital technology, but it’s not easy to perform when it finally gets time to be in the studio.

JV: So you see people in radio as not necessarily out of the game just because they’re in radio.
Susan: I find that radio people have an advantage in that they’re very, very comfortable behind the microphone. They tend to be extroverts. They make relationships easily. They love to speak. They love what they’re doing. The big problem that radio people have in doing voiceover on a really major level is learning how to be conversational and not to sound like an announcer. That’s still something that casting directors and talent agents tell us when we get into auditions – no announcers. In the twenty years that I’ve been doing this full time, it’s never ended. It’s not just me. It’s that they always want that real person, casual, conversational style. And that, I think, is the main challenge of the radio person wanting to do this in a major way. That and the marketing.

July 01, 2009 6039
by Steve Cunningham I’ve done a great deal more location recording lately, including a number of interviews that are destined for podcasts. My go-to recorder has been the Compact-Flash-based Fostex FR-2LE (see the November 2007...
Read More...
© 1988 - 2023 Radio And Production, LLC
Go to Top