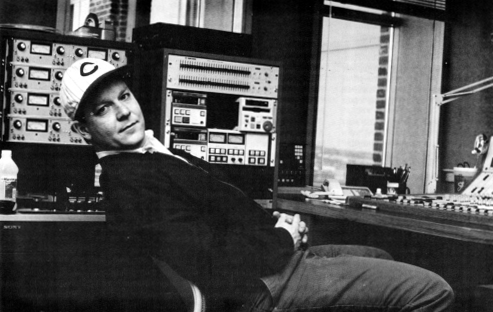 Not so long ago, in the late '60s and early '70s, FM stations began to pop up around the country with a whole new approach to radio. They were called AOR stations. These were the stations that would walk the line, and sometimes cross it, between what was the norm and what was maybe a little too "much" for public airwaves. Creativity, as it was known then, was unleashed in an "anything goes" arena of rock and roll, and it was on these stations that truly creative radio production had its beginnings. There is a long list of production wizards who began in this era, a list that contains some of the greatest names in radio production. Many on the list are still at it today, using the same basic approach to creative production they used twenty years ago. Tom Sandman is one of those veterans. What's the approach? Fun. Radio's supposed to be fun.

R.A.P.: Tell us about your beginnings in radio and how you wound up at WARM 98.
Tom: My first exposure to radio was in college at the University of Cincinnati at the gone but not forgotten WFIB. It was a carrier current station at UC. I started there in '73, and that turned into an opportunity to work at a real radio station, the public station, WGUC. They had an all-night show when they still allowed students on that station. The show was called Full Moon Radio. The show is gone and the student involvement at 'GUC is gone, but again, that gave me a chance to attract the attention of a couple of people at WEBN which was the hometown AOR station and one that I have been listening to ever since they clicked on the air.

I got a weekend gig at WEBN, and it proved to be a fortuitous move because the production skills I had started to build in college were sorely needed at 'EBN, but not because they didn't have a good producer. They had a great producer, Jay Gilbert. 'EBN was going through a big growth period at that point. Their ratings and their commercial load was skyrocketing, and Jay needed some help. So I was hired part-time to assist Jay in the production studio, which later became full-time -- four days a week in production and one or two weekend shows. Jay went on to start his own production company called Jay Gilbert Productions and moved to his home town of Philadelphia, and when he moved I was given the Production Director's job at WEBN. That was around 1976. I was there until 1982.

In September of 1982 I left 'EBN to take a position outside of my home town for the first time. I had never lived outside of Cincinnati until then. I thought I owed it to myself to see what I could do, so I kept applying for jobs at major market stations I always wanted to work at. Finally, WBCN in Boston had an opening. Tom Couch had left the radio station in order to, again, go into business for himself, Tom Couch Productions. So, I was there working with the likes of Billy West, Mark Parenteau, Charles Laquidara, and Ken Shelton during what a lot of people called the Golden Age of 'BCN. Oedipus, as he is now, was the Program Director and is to this day the greatest I've ever had the honor to work with.

I felt pretty lucky because 'BCN and 'EBN were very similar in that they both started very early. They were heritage AOR stations. 'EBN started playing progressive rock in August of '67. 'BCN started in March of '68. They were both started by a couple of owners who were, you would say, eccentric. They were trying to establish alternative radio programming styles. Frank Wood in Cincinnati was programming a blues, jazz and classical station, and T. Mitchell Hasting was trying to program a network of classical stations. He had WBCN in Boston, WPCN in Providence, and WHCN in Hartford, and they weren't making a lot of money on these radio stations. So they both kind of turned the asylum over to the lunatics who promptly started playing this new underground progressive rock, and the rest, they say, is history.

What's interesting is that both radio stations also had, from day one, a commitment to offbeat, creative, eccentric, weird, humorous production -- produced elements in between the records, some of them commercials, but some of them not commercials -- just production for the sake of entertainment, image production. That also attracted me to 'BCN, and I had a very happy and productive eight years there.

After fifteen years as a producer, I had an opportunity to become a programmer. So I took a job as Program Director at WBOS in Boston. I didn't know it at the time, but the station was going through some bad financial problems. In fifteen months the radio station was sold, and I was out of a job. 'BCN had already hired John Riley, who is doing a great job there. So I found an opportunity back in my hometown of Cincinnati at WARM 98, the heritage soft rock AC station here, and I've been here for about two years and two months.

Since I arrived, we've taken on two competitors; they're both adult contemporary stations. We put one of them, MAGIC, out of business. They were just sold to Jacor, and they are now a classic oldies station. Susquehanna's a nice company to work for, and it's nice to be back in my home town again.

May 01, 2002 16528
by Steve Cunningham Most of my clients get CD copies of their finished projects, including those that want the finished tracks sent as mp3 files via the Internet — it’s cheap insurance and a nice touch. As a result, I duplicate...
Read More...
© 1988 - 2023 Radio And Production, LLC
Go to Top