If you’re still editing analog tape (and many still are), this Test Drive is definitely for you. The basic editing tasks performed on 2-track reel-to-reel decks should have become a thing of the past at your facility a long time ago. But, we understand. There are budgets to follow, a new transmitter to buy, and other things much more important to some station managers. But when you can get your hands on a good digital editing program like Fast EdDit from Minnetonka Software for a mere $199, it’s time to look at the cost of those expensive 10-inch reels of tape versus the one-time investment into a basic computer system and editing software. And for those of you who have already stepped into the digital domain but find yourself or other staff members doing too much simple 2-track work on your mega-dollar multi-track workstation, this Test Drive is for you, too. Fast EdDit has been around for several years under a couple of other names. You may remember it as The EDitor or Fast EDdie. Once distributed through Digital Audio Labs, it is now available directly from Minnetonka Software in Minnetonka, Minnesota.

Fast EdDit comes on two 3.5-inch floppy disks and installs easily. Minimum system requirements include a 386 PC with 4 megs of RAM, Windows 3.1 and DOS 5.0 or higher. As with any digital editing program, the better the computer and the more RAM available, the better the performance. Any Windows-compatible sound card will work. For this review, the program was installed on a Pentium 200 with 64 megs of RAM and the Turtle Beach Tahiti sound card. For a simple 2-track editor such as Fast EdDit, this is plenty of horsepower. 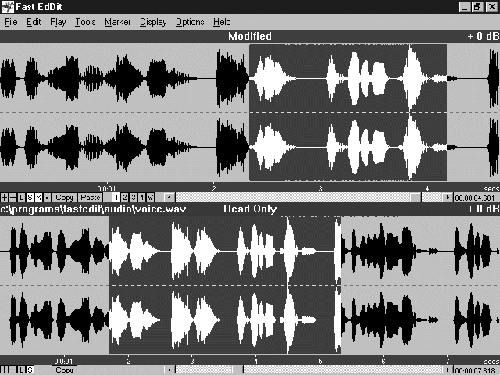 Fast EdDit records audio in the Windows .WAV format. It will load files in the .SND format for backward compatibility with earlier versions of the program, but it does not record in the .SND format. Recording is as simple as pressing Ctrl-R on the keyboard (or selecting Record from the pull-down menu), naming the file, and clicking the Record button on the Record window. When you press Ctrl-R, a basic Windows file naming dialog box appears. (Fast EdDit does not support Windows 95’s long filenames feature, so you are limited to 8-character names.) Once the file has a name, the Record window appears. Here, two level meters indicate input levels, the sampling rate can be set (11.025kHz, 22.025kHz, 32kHz, 44.1kHz, and 48kHz in stereo or mono, 16 or 8-bit, depending upon your audio card’s capabilities), and indicators show elapsed recording time and remaining time on the disk. There are also settings for MIDI control of the Record Start function, and a Drop Marker button lets you place locate markers anywhere in the file while recording. Clicking Close stops the recording and returns the program to Fast EdDit’s main screen where all editing is done.

Other recording features include a Punch-in mode and a simultaneous play and record mode that lets you play one stereo file while recording another. However, these features are only available if your system is using the CardD Plus soundcard from Digital Audio Labs.

August 01, 2000 2443
Val Davis, Co-Founder, AudioSonix, Olney, Maryland Several companies are quickly establishing themselves as major players in the new game of Internet based audio delivery. One of those companies is Olney, Maryland based...
Read More...
© 1988 - 2022 Radio And Production, LLC
Go to Top