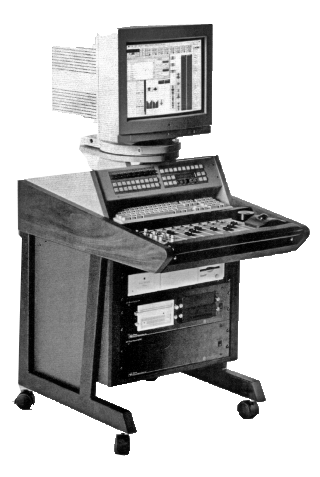 In May of 1993, we offered a limited review of the ADX digital workstation based on a one-day visit to PR&E in California. A lot has changed since then. Now there are several configurations in the ADX series, and the DAWN software engine has been upgraded considerably. The ADX family includes the ADX Pro, the ADX Eight, and the ADX Ensemble. This review takes a close look at the Ensemble, a stand-alone, digital disk-based workstation featuring automated digital mixing.

The Ensemble is an 8-track workstation designed around the DAWN software, Version 4.1. This software was initially designed for A/V applications, but PR&E has worked closely with the designers over the years to bring the current version to you with several modifications aimed at making the interface more "radio friendly." Their efforts were successful. However, the Ensemble is still a workstation that requires time spent with the manual. It's not that the Ensemble is difficult to use. It's simply that there are so many features and functions available that you must read the manual to learn how to drive this machine at top speed. And the learning curve is not long at all. Once you get the essentials of recording and editing, the rest falls into place quickly.

The roll-around stand features a 17-inch color monitor setting above the dedicated control panel. This panel brings the more frequently used functions to your fingertips and eliminates "clicking" menu selections for these functions. Below this panel resides the computer keyboard used primarily for naming files and projects. The keyboard also offers many single keystroke shortcuts for several functions. In front of the keyboard is the mixer panel where faders, EQ, sends, returns, pan controls, and the scrub wheel are located. Below the scrub wheel is the trackball with two large buttons on either side. The trackball is used to move the cursor around the screen and perform the basic "mouse" point, click, and drag functions. The bottom portion of the roll-around stand houses a Power Macintosh 6100/66, a unit that houses the external drives, and a third unit that houses the digital I/O and analog I/O cards.

When you record something into the Ensemble, you record a Soundfile. These Soundfiles remain on the drive in their entirety until they are deliberately removed. As a result, all editing is nondestructive. The Soundfiles are represented on the screen as Cues. Cues can be the entire Soundfile or a segment of the Soundfile. The cues are edited, cut, copied, pasted, and moved around the eight tracks in what is called the Mixview window. This is where practically all your time is spent. The work done in the Mixview window is saved to a user named file called the Mixfile. To load a previous project, simply go to the folder icon for that project, double click, and that folder opens to reveal all the Soundfiles and the Mixfile for that project. Double click the Mixfile icon and the Ensemble loads the project. This is a process that takes about thirty seconds for most basic commercial and promo productions. Saving a project is a little faster.

October 01, 1995 12125
Jeff Thomas, Production Director, Virgin Radio, London, England A few months ago, we checked in with Steve Martin at BBC Radio Scotland and got a perspective of "public" radio in the U.K.. This month we visit with the Production...
Read More...
© 1988 - 2022 Radio And Production, LLC
Go to Top