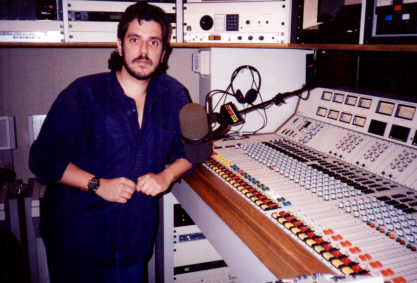 He's one of Howard Stern's biggest fans, and probably the only Production Director with as much experience producing at a "Howard Stern station." This month, we visit with Ronn Lipkin, Production Director at L.A.'s classic rock KLSX-FM, proud owner of the Howard Stern morning show despite record setting fines! Join us for a behind the scenes look at producing at a Stern station, and find out how Ronn helped put the "fun" back into funeral.

R.A.P.: Where did you get your start in radio, and how did you wind up at KLSX?
Ronn: I started in a small market. My first job in radio was right out of college -- I was a music major. I put together my first demo tape in my bedroom on an old Wallensac recorder -- one of those with the tape speed as slow as 15/16 ips. I didn't really know what I was doing, but I cut out a few newspaper stories and had a friend click a typewriter in the background -- primitive effects. I took that tape around to all the stations in Delaware and Southern New Jersey, where I'm from, and it clicked at one of them, a little station, WNRK, in Newark, Delaware. I worked there for a while, doing what I didn't realize was going to be a very, very long airshift. I started off doing noon to 4:45, which was noon to sign off. It was a little AM daytimer. What I didn't know at the time was that sign off in the summer was 8:30 p.m.! Guess who was on from noon to 8:30? It was good training, but, boy, was I beat! I ran out of creative ways to introduce songs -- "Here's Eddie Rabbit, still driving his life away," as I played it for the fourth time that day. I didn't know what to say, but it was good experience. On top of that, I would often get off at 8:30 and do three to four hours of production in their little studio. So the days were long -- part of the dues paying -- but they were well worth it.

Then I went to a hometown station in southern New Jersey. WJIC was a little place out in the middle of a cornfield, and I was the Music Director there. We went Country when I arrived, and I didn't know anything about that format. So, I tried to bone up as quickly as possible. I then went on to WAMS in Wilmington, Delaware which was the first, I guess you could say, "rated market" I worked in. I think the market rank was 75. That's where I really started to encounter pros. Some guys there were working weekends in Philadelphia which was the nearest major market. I worked at WAMS in a variety of capacities -- news, some street reporting, weekend jock things, and production.

My first big break was when I went to WYSP in Philadelphia. I was working in Wilmington at the time and a friend of mine, Todd Doran, noticed an ad in one of the trades for an Assistant Production Director at WYSP. I thought, "Oh, my God! I'm not ready to make the major market yet!" But then I thought, "Yes you are! C'mon!" So, I really labored in this little 2 track room in Wilmington to make my tape the best it could possibly be. I figured for a job like that there would be quite a number of applicants. So, I made it as custom as possible and acted out my resume. I put my resume on tape and made it 94 seconds long because the station was 94 FM. And I made damn sure it was 94 seconds long because I knew they'd be timing it, and I wanted to make sure it wasn't 93 seconds because their chief competition was 93.3!

So, I sent that off, and I got called back by R.D. Steele who was the Production Director at the time. He said, "Hey, that was pretty good. Now, get me a second tape." I thought, "Okay, sure. No problem with that." So I listened to WYSP and did a few promos in the style I thought best suited the station. It was a two minute tape, but I easily spent twenty-four hours on it. I did a million takes on everything. I wanted to make it perfect. It was a big gig. The second tape got me the interview, and I became Assistant Production Director there.

R.D. told me something very interesting. He said it was the second tape that really separates the men from the boys because a lot of people shoot their load, so to speak, on the first tape, and they have absolutely nothing left to give on the second. He said of the many other applicants they had, only three or four of them could even produce the second tape. Knowing that felt pretty good. Anyway, I was Assistant Production Director for the first year and a half at WYSP in Philly, and it was great, finally playing in the big leagues. I was R.D.'s assistant till about October of '85.

R.D. was great to me. He really taught me a lot of things, and he was extremely creative. And what was unusual about WYSP was that for a major market station, they had a very underequipped production studio. There was one studio. It was a 2 track with an old Collins board - you know, rotary pots, no effects, no nothing. Whatever multi-tracking there was, it was done with the cart machines we had stacked up.

When R.D. left to do his own thing, doing voice work, I became Production Director. It was very intimidating at first. This was my first official Production Director gig. Here I am, in this major market, I'm the Production Director, and I don't have a whole lot of experience. It was intimidating because here were all these jocks, some of which I hadn't grown up listening to necessarily, but I certainly had a lot of respect for. There were a lot of pretty famous names in the area, and here I was working side by side with them. It was hard at first, I'll tell you that. The station was going through a decline in the ratings at that time. WMMR was beating us pretty badly, and that's a rivalry that's been going on for many, many years. But, I just kept working at it, trying to keep my ears open, listening to people's advice, constantly critiquing my work, and I think I got better.

Then in August of '86, something big happened at WYSP that really changed my life. That was the day we became "Howard Stern All Morning and Classic Rock All Day." Howard, as you know, is broadcast from New York, but WYSP, being an Infinity station, decided to start carrying him. That was Andy Bloom's idea. Andy was the Program Director at YSP at the time and is still my Program Director here at KLSX.

Andy thought, "Funny is funny. You don't have to be a local morning show to work." Howard Stern is simply very funny. So, Andy engineered this whole simulcast deal, and we began airing Howard in the morning. That was the turning point for YSP. We just started going nuts. The ratings went up, and revenues went up. Those were very good times at YSP. I ended up working there for seven years, from '84 till '91. I saw Howard Stern become number one in Philly, and we were part of the big funeral for the morning man at WMMR. We had this big mock funeral right outside of the MMR studio, with about...oh God, there were thousands of people there. Just imagine, thousands of people, led by Howard, screaming and chanting, "You suck" in the direction of the MMR studios, right outside their windows! It was amazing because of the intense rivalry between the stations. That felt especially good.

Andy left YSP at the end of '90 to become the Program Director here at KLSX with the idea of getting Howard on the air out here. His Promotions Director at YSP, Scott Siegelbaum, followed him right away. Andy knew I really wanted to come to L.A. very much, because my wife is from here, because I like the weather, because it's a very creative environment. I followed shortly thereafter, and that's how I got here.

R.A.P.: Was Andy the PD at WYSP when you arrived in Philadelphia?
Ronn: No. Andy came to the station, I think, in the beginning of '85 shortly after I got there. He was only 23 years old when he came from Milwaukee. I thought, "Oh my God, who is this guy? He's only 23! He's a kid!" As it turned out, the guy is a visionary, and he has a tremendous grasp of the big picture, of marketing strategy, of how a station should sound.

June 01, 1997 12435
by Jerry Vigil If you've read the past few RAP Test Drives, you might have gotten the impression that computers and audio software have arrived at a technological level where the audio production pro can take a serious look at...
Read More...
© 1988 - 2023 Radio And Production, LLC
Go to Top