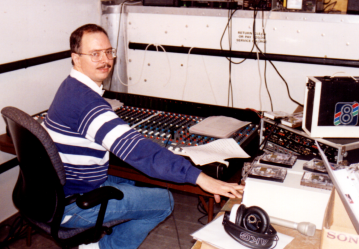 This month's interview exits the radio business altogether to take a glimpse at the world of TV audio production. But we don't stop at the average television station. Instead, we pay a visit to ABC affiliate WFAA-TV Channel 8 in Dallas, Texas where Wally Wawro heads up one of the most progressive audio production departments in the American television industry.

R.A.P.: When did you get your first taste for the production business?
Wally: I grew up in the south suburbs of Chicago. It was around 1960 when my dad brought home a tape recorder, and that was the beginning of the end, so to speak. He had always been interested in music and had a big record collection. He built his own hi-fi system out of kits and his speaker system out of plywood and other raw components, so I was always exposed to music and audio. In fact, I have a picture of myself at 3 years old, and my mother tells me the only way I would sit still for the photographer was to be given something to hold -- it happened to be a 78 rpm record.

When I got into high school, I started recording things on location -- the school band, the school choir, everybody and his uncle's rock-n-roll band in their garage -- and just always had an interest in it. I do not have any great engineering background, but the knobs and dials aspect of it all really interested me.

I never really did anything in terms of the radio business until my junior year of college. I transferred from the Chicago area to Southern Illinois University in Carbondale. At the time, it was one of the premier schools for people interested in the communications media. There was a student radio station which was carrier current [coverage basically limited to the school building], and the university also owned a full-power FM, WSIU, and a full-power television station, WSIU-TV channel 8. Both were PBS and PR type of operations, and the students basically ran them with faculty guidance.

My first real exposure to what we think of as production came when I was volunteering at the student-run, carrier current station, WIDB. The station was programmed with a top-40 format, and we were all just flying by the seat of our pants. We did our own jingles. I think they were Pepper Tanner a cappella sings, and somehow we matched them up with TM jingle beds so we could have jingles. Everything was done sort of, how shall we say, clandestinely. It was a lot of fun and a great learning experience.

R.A.P.: What happened after college?
Wally: I graduated from college in '73 and proceeded on to that wonderful world called small market radio. I worked in Columbus, Indiana at WCSI-AM/FM. Then an entrepreneur came into town to put in a second FM station, and the call letters of that station were, of all things, WWWY. I was the original Program Director/Operations Manager. I did everything, and I did that for a year. I learned a lot about myself, mainly that management was not the way I wanted to go and that I really, really liked production a whole lot more than going out and doing basketball games and things like that.

From there I moved on to another small market, a station in Danville, Illinois where Dick Van Dyke got his start. That station was WITY. We were a top-40 AM station on 980, just down the dial from WLS which boomed into Danville; but we held our own locally and it was fun. I was the Program Director, once again. I also did the bulk of the production, but we had nothing in terms of production facilities. It was your basic couple of full-track machines, a 6-pot board, and a cart machine. Somehow we managed to crank the work out and had a lot of fun doing it. After these stints in the small markets, I moved on to Texas.

R.A.P.: Texas brought you several years experience with TM Productions. How did that come about and what did you do at TM?
Wally: I had been enamored by the jingle business ever since college. That was where I heard my first jingle demo. I got to talking with somebody one day about what it would be like to work in Dallas for one of the jingle firms. That was sort of a goal for me. Every so often, the trade papers would have an ad from PAMS or TM looking for help. A couple of times I got brave enough to send something down. It was March of 1977 when I got a call from Ken Justiss who was the Operations Manager at TM Productions. The call was basically, "We'd like to interview you for a position we have open. Could you be here on Monday? We'll arrange your flight and everything." Well, you don't say no to that, so I came up and interviewed. I did not get the job, but it was neat coming to Dallas, coming to see this mecca that TM was at the time, and looking at the studios and getting a taste of just how they worked all this wonderful magic we all heard on their jingle demos.

A couple of weeks later, I got a call from a gentleman in their programming division by the name of Don Hagen, and he said, "I have a job for you." I left Danville and moved to Dallas, and I have been here going on sixteen years.

I started out working for TM's programming division, and I was essentially assembling automation tapes. About a year later there was an opening in the production division for a producer, and I was able to move into that position. The 70s were the heyday of TM, especially the mid to late 70s, and that's when they were selling gobs of jingle packages, things like The Winning Score and The Alternative. They also had their production libraries which were just about everywhere -- Masterplan, The Producer, The Production Source. I was primarily responsible for working on material for all three libraries but mostly for Masterplan and The Production Source, and this would be anything from editing music, assembling tapes made from masters, and writing copy to go along with this. It was a lot of fun.

I also got involved in doing the demos for the jingle packages, and again, this was during a 60s and 70s mind set where everybody was really anxious to hear what that next jingle package was.

TM also put out three compilation albums. The most famous one was Tomorrow Radio which was done for the '76 or '77 R&R Convention in Dallas. Then they did one called Station Image, and the third one was called Tomorrow Media. I contributed quite a bit to Tomorrow Media in terms of copywriting and production, especially on the sales portion of the disk which highlighted the programming formats and jingle demos and such. I couldn't even begin to remember the names of the packages or the jingle demos that I was involved in, but let it suffice to say if it came out between '78 and '81, I probably did the demo, and that included writing the thing, taking the jingles that had been produced, and figuring out how they would all fit so someone would buy them.

April 01, 2008 7217
by Steve Cunningham This month I’ve decided to focus on a couple of software enhancements that significantly speed up my Pro Tools workflow on the Macintosh computer. For those of you on Windows, fear not — I’m putting together...
Read More...
© 1988 - 2023 Radio And Production, LLC
Go to Top