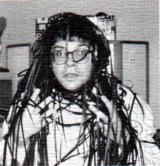 First off, I'd like to thank all those who were kind enough to write me about my "Production Stress Anxiety" piece. Dianne Graribay, the Traffic Manager at KSMG in San Antonio, Texas said, "Guess what! Traffic Managers go through the same thing! My 'Phantom' still bothers me almost 2½ years later!" My God! He's everywhere!

John St. George, Creative Director at Joy 107 in Ft. Lauderdale, Florida commented, "For Christ sake man! You either work with a bunch of animal sales people dumping stuff on you (nothing but negatives as well) or you're just doing too much!" A little of both, bro. He adds, "...at this radio station -- AT ANY GIVEN MOMENT -- I fall somewhere between a genius and an asshole." I'm hip.

Peter Delano of 95.1 THE FOX in Prattville, Alabama went through a family crisis that involved a loved one having a nervous breakdown. He equated my 'Phantom' with his loved one's 'little voice.' He wrote, "When I was home for Christmas, we talked about my job and the conclusion we reached was just like yours: I needed more praise and feedback than I was getting." If there are any sales people or programmers out there reading this, do the right thing! A pat on the back once and awhile works wonders!

Richard Ray of KBCO in Boulder, Colorado also addressed the feedback issue, this time in relation to the listeners: "As we move into the 90's, I sense the 'artistic' side of our culture is in a slump. We receive much less feedback from listeners. As the pace picks up at work, you begin to feel that if you can just keep sound on the air you're doing a good job." Oh yeah. Those hectic days of what I term "meatball" production can really put your mind in the void! It seems like you're talking all day without saying anything! Then, when you listen to your station and hear those banged out mothers on the air, you wonder where they came from!

Finally, Art Oppermann, Assistant Production Director at KUAD in Windsor, Colorado is a busy guy! Not only is he also the Night DJ, but he's the Assistant Music Director, too! Talk about stress! He writes, "Boy can I relate to what you go through with your attacks. Being at a new station and having these new duties, something I'd never done before, made me increasingly anxious. Did I mention the station got a new Program Director shortly after I got here? Of course, that added to the anxiety. I wondered if he thought I was doing a good job; if the Manager thought I was doing a good job; was I doing a good job?! I found myself up pacing the floor one night before bed. I was so nervous about it all!" Art, trust me, you're doing a good job!

This month, I'd like to tackle the subject of creative freedom and risk taking. As Production Directors, we are constantly asked to come up with new ideas. Often is the time I've heard a salesman say, "This client is looking for something new and original." No shit. I didn't expect him to want something old and unoriginal! Salespeople... AHHHHHHH!

It can be equally upsetting when a client tells a salesman, "You know that TV spot for McDonald's with the midget riding the goat? Do that for me!" Oh sure. Let's rip off something. No problem. We're just a 4,000 watt local station. The real creators will never hear it. We won't get sued. My brethren, I know that as creative people we find it very hard to understand how these bozo retailers think. What I try to tell them is this: Why use an idea that's been done already? The public thinks of McDonald's when they connect goats with midgets. We can do a parody of that idea, if you like. Or, we can try something different. This basic comeback usually works.

Recently, my partner Steve Morrison and I tried something really different! Since I work at a rock station, I find myself doing many radio ads for nightclubs. Club owners are the hardest people to deal with because you talk to them weekly! Unlike a car stereo, TV, or any store bought item that you can visualize or hold in your hand, a club is basically just a big box with flashing lights, a bar, filthy bathrooms, and a dance floor. How do you sell that? Not only that, but how can you do it a different way for each club on the air? Thankfully, many clubs book bands, so you can talk about the bands, the drink specials, and the occasional giveaways. But, there are many clubs that don't do a damn thing! Yet, they want their spot to be "original and different."

One such place was a club called Carrington's, here on Long Island. It's a pretty classy looking joint with lots of pretty girls working there. These guys had a few jingles produced for them over the years (all of them awful and corny as hell). Recently, a salesman told me that they were tired of the same old shit and wanted something different.

"How different?" I asked.

"As wild as you like! No holds barred. Go nuts."

What fools these mortals be.

My partner Steve (who is a professional stand-up comic and mondo sick individual) called me up with his concept.

"We'll have The Elephant Man go to the club with his male model friend. This will show that Carrington's is for everyone! We'll even have him pick up a girl!"

Sounded wacky enough to me.

Of course, I never expected the client to approve this wild idea, but I figured, "What the hell. Give it a shot." Steve went to Carrington's and read the spot to the owners and the girls who worked there, fully expecting them to vomit blood after they heard it. Instead, they all loved it, and it was approved to be produced! I couldn't believe it!

After the spot was cut, I began to have second thoughts. Maybe it was a bit too much. In the past, I have done wild commercials that have gotten listeners angry. They usually phone in their complaints and I end up talking to them all, trying to explain what I was trying to do. It sucks! I could hear the phones ringing as I listened to our completed spot. You sometimes forget that there are real people out there listening to your stuff. In this mass media world, people can interpret what they hear and see, any way they want! Even if you don't mean to offend anybody, it's possible you will. Sometimes you get so caught up in the humor of what you've written, you get a bit selfish about it and lose sight of the possible repercussions.

I decided to call the client and tell him I was a bit worried and had second thoughts. (Steve was not happy! He wanted that sucker on the air!) I felt that it was my responsibility to be honest with the client and give him the final word on whether to air it or not. I didn't want our spot to ruin his business! The client appreciated my concern and told us to write something new. We did. It was wacky, but not as wacky as The Elephant Man. For the hell of it, I played the original spot for some of the people here at WBAB, including the Program Director. They all loved it, although they did concede that it might cause some problems. (Some people felt there was absolutely nothing wrong with it, including the PD!) I called the client back.

"I hate to keep yo-yoing you around, but we took a little vote and most people around here find nothing wrong with the spot. Do you want to give it a shot?"

"No. Maybe we should play it safe."

The next day, the client called me back.

"The owner likes the spot! He wants to go with it."

Okay. It will run.

The spot premiered Monday, March 5th at 12:17 pm. I watched from another studio as the jock played the ad. I waited for a reaction. He laughed! So far, so good.

"Take it off! Immediately! I'm getting a shitload of complaints! People are telling me it's in horrible taste! I even got a call from a hospital! Get it off the air and do a straight read!"

"Well, what about the second less wacky spot?"

"That one sucks too! Just do a straight one."

The lesson to be learned is this. Be wacky. Be creative. But trust your instincts! If you think there'll be a problem, chances are, some nuts out there will back up your prediction! Sometimes, it doesn't pay to go too far. There is an art to walking that fine line.

(Listen for the three spots on this month's Cassette. The first spot is the original Elephant Man spot, the second is the rewrite, and the third is the final "straight" ad. What do you think?)

Dennis Daniel is the Production Director at WBAB-FM in Babylon, New York. He welcomes your comments and letters. Send correspondence to: [contact info no longer valid].