Creative brilliance in itself is not rare in our industry, but unfortunately, most of it never gets on the air. It is the lack of freedom to manifest this creativity that keeps most great ideas in someone's head. Sometimes the person with the great idea doesn't have the time to produce it. Other times, the idea will be presented, only to be squelched by a conservative client, sales-person, Program Director, or some other individual that is unwilling to take a chance on a wild idea.

Dennis Daniel, Production Director at WBAB-FM in Babylon, knows the value of creative freedom; but, most importantly, the management, the sales staff, and the clients of WBAB-FM also know the value of this freedom.

Too often, a station will overlook the creative talent on its staff. This month's interview is a good example of what can happen when the floodgates are opened, and the creative river is allowed to flow freely. 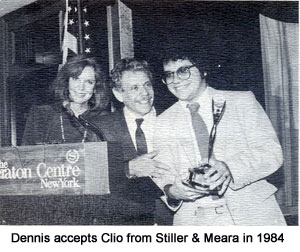 Dennis: Quite often, in radio production on a local level, you end up doing a lot of club spots. There are so many of them, it's hard to come up with original ideas for each and every one. You don't want every commercial to sound like someone just reading over a bed. If it's a heavy rock club, they'll say, "Put some Guns And Roses under it and some Rat and some Poison..." That may create some kind of an image, but I like to experiment. I like to create some kind of imagery that makes people interested in the place because they took a chance on something they heard on the air.

A club is not something you can hold in your hand; it's not a car stereo or some product you can visualize. A club is a big room with a stage, lights, a dance floor, and a DJ. No matter what kind of conglomeration you have, or how many lights, or how many couches, you can't really convey that over the radio, except to say just that; and everybody says that: "A beautiful dance floor, a wonderful light show, the best DJ on Long Island." So what I do, to certain people that are willing to take the risk, is say, "Listen. Let me create something that is going to attract people's attention over the radio."

R.A.P. Give us an example of one of your creative club spots.
Dennis: Well let me play one down the phone line for you. (Note: This spot and others are featured on this month's Cassette.) This one is for a club called the "Salty Dog". This club has been on Long Island for a long time, already has a reputation, and doesn't really need to do anything as far as describing it on the radio; but, they still want to say what bands and stuff are going to be there. So what I did was create a montage of bizarre circumstances, bizarre visuals, a conglomeration of weird little vignettes that mean absolutely nothing. I have a basic structure that I follow where I always begin the spot by saying "the Salty Dog Of Huntingdon" in a weird way, like "the Doggy Hunt of Saltington," or "the Hunting Salt of Doggington." Then I always have this section of people singing, "Do Waa Bop Bop", which is from a Neil Young album. In the middle of the spot, I always put a clip from Iggy Pop where he goes, "I'm a real wild one, wild one." Then I end the spot with the "Do Waa Bop Bop" singing again, so the spot has a very tiny structure. Also, at the end, I always say something weird, a very bizarre phrase like, "The Salty Dog Of Huntingdon, Let Me Take Your Hat," or "The Salty Dog of Huntingdon, The Future is Plywood," weird things that mean nothing. Meanwhile, the club does fantastic business, and people are anxious to hear the latest Salty Dog commercial. I get so many clubs coming to me saying, "I want something like the Salty Dog," and I say, "I can't. The Salty Dog is the Salty Dog!" It all came from experimentation. It all came from sitting in the studio one day and saying, "I am just going to break all of the boundaries and do whatever the hell I want," and that's how it started.

R.A.P. This type of creativity obviously takes time. What are your responsibilities as Production Director, and what help do you have, if any?
Dennis: I write most of the commercials that come in house. I do have a full-time assis¬tant, Chris Frohne, but my assistant's job is basically dubs, tags, donuts, and things of that nature. He handles the busy work so I have time to do the wild and crazy stuff. I also write comedy for the morning show and for a special show we have on Fridays called "Jerry's Gin Joint."

R.A.P. Who does the promos?
Dennis: The afternoon jock, Roger Luce, has a beautiful set of pipes. He does a lot of the promos because his voice is so powerful. I'll do promos when my parti¬cular talents are needed for them, but I'm not called on often to do them.

R.A.P. So you have 3 full-time people handling all the production?
Dennis: Basically speaking, yes.

May 01, 1995 20873
by Jerry Vigil Over the years, I've had the wonderful opportunity to Test Drive a number of workstations. Some were big and bulky, others more compact. Some required fairly complex installation procedures, others were a piece of...
Read More...
© 1988 - 2023 Radio And Production, LLC
Go to Top