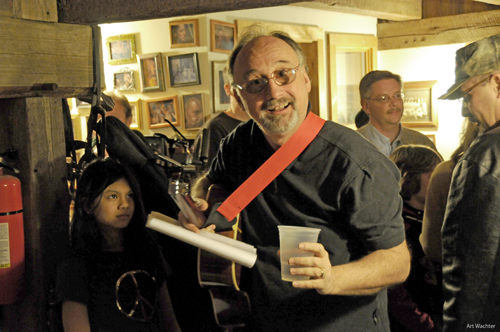 The original “Production Rat.” Depending upon how far back YOU go, you may remember articles in Radio World by Ty Ford, and if you’re a long-time subscriber to RAP, you may recall our first interview with Ty sixteen years ago in 1993. Ty had been out of radio for a few years, enjoying some success in the voice-over business, and had just finished a book on audio production, which was a focus of our interview. Has he managed to remain self-employed all these years? Yes. Has he become another one of those big six-figure voice-over guys? No. What does a Production-Rat-turned-voice-guy do when the voice-over market crashes? How does he survive? Even flourish? We have those answers for you, and answers to questions you haven’t even thought about yet. Radio production people have a special skill set, and as Ty unmistakably demonstrates, it is a sturdy springboard for those looking beyond the hallways of radio stations.

JV: In our last visit 16 years ago we focused on a book you had just written, Advanced Audio Production Techniques. You’ve done a lot since then, so let’s catch up. What was the next phase of your career after that book?
Ty: Well, that was in ’93, so I was out of radio. I was not working for a station. I worked hard from ‘93 up through 2000, and I saw a decline in voice work which was probably about 75 or 80 percent of my work at that point, freelance voice work through AFTRA and SAG. I saw the decline happen pretty sharply after the millennium and marketed very aggressively against it until 2004, and at the end of 2004 I said, “Well, it’s just not here anymore.” And this was not just me. This was true for a bunch of guys and gals who are professional voiceover people in the Baltimore and Washington markets and other friends that I have around the country.

So everybody was kind of looking at each other. We’d gotten past the point where you say, “How are you doing?” “Oh, I’m doing fine.” It had gotten too real and people were actually starting to be honest about it, which was extraordinary in itself, and I think shows the degree of fear that was being felt.

And what happened? Well, corporate industrial video fell out of favor for a number of reasons. Computers were not yet fast enough to handle audio and video but they were fast enough to handle text. So people were using various programs to train their employees, to tell the story here and there without video. So that put the voiceover people and the on-camera people who used to play parts in the vignettes that were part of the sales and training videos and all that stuff -- internal, external communications, you name it -- that just nailed them.

And at the very same time we had the advent of the big box stores, and the small retails that had been the bread and butter of voiceover people for doing commercials locally and regionally just got plundered. We have Lowe’s and Home Depot who came in up here and basically crushed any local regional hardware garden stores. There are a few left that specialize, and they’re okay, but a lot of people went out of business. That meant the advertising agencies that had those accounts lost the accounts. Many of the advertising agencies went out of business and the voice talent that did the work on those spots no longer could do that work.

So it was definitely a downward spiral. After 2004 we then have broadcast companies like Clear Channel and others finding that voice tracking is now possible because finally, the bandwidth on the Internet is wide enough to allow those kinds of transmissions. So they decide to blow off a bunch of announcers in the secondary and tertiary markets. And where did those people go? They’re best trained to put together copy, record it, and be on the air somewhere. Most of them were non-union so they hit the streets as non-union talent looking for work, and in doing so they cut the bottom out of the local and regional union voiceover market. Before this, a radio spot would get us, depending on what year and what the contract was, around $200. These guys were coming in and saying, “We’ll do it for $50 a spot.”

JV: So there it is, 2004, and the VO market tanks. How would you assess it today? Is it just as bad? Is it worse?
Ty: Well, right now it’s in pretty bad shape because there’s an oversupply still. There are websites out there where you can join as a voice talent, and I won’t mention any names, but I found out about one and I went to it. You can register for free. I registered for free. I did my profile. I uploaded my clips and then I went back to the site and logged in and pretended I was a customer. I found the Ty Ford page and I listened to his clips. I scrolled down a little bit and saw, “Like Ty Ford? Want someone that sounds like him?” And there were 13 clips of other people that were down there. I checked them, and of the 13, 12 were non-union, and I wasn’t sure about the 13th. I said, “This isn’t going to work.” I’ve got to charge scale if I want to do it above board and get the pension and health coverage, at that takes me out of the competition because these folks will do it for 50 bucks a pop, so I’m done. I checked a number of the online services and saw that pretty much that’s the way it was.

I emailed the guys at this one service and I said, “You know, you’re not really doing the talent any service by posting clips from 12 or 13 other people on the very same page, and I’m trying to figure out how that’s good for me.” And whoever answered the email must have had a Masters in PR, as they spun a very pretty story. As a matter of fact, I emailed them back and said, “God, you know, you obviously have a degree in creative writing because you’re wonderful, but the bottom line is, this isn’t good for me.”

JV: It sounds like the bottom line is, you didn’t pay.
Ty: Well, there’s that too. I don’t recall if that one was the site with the offer: “Now if you really want to get some exposure, use our special category where you pay us some money.” I’m very wary of that. I’ve been approached by people and can’t even count the number of entities who’ve approached me on that, and my line to them is, “Show me that you can make me money and I’ll write you a check. Bring me the business, I’ll write you a check.” There are just too many places out there. You can go broke paying money to websites that promise to give you business.