Avantone Pro is proud to announce availability of its BV-1 mkII tube-driven, large-diaphragm condenser microphone , — made for anything as a ‘spare-no-expense’ approach to microphone design with every single component chosen for its sound quality. 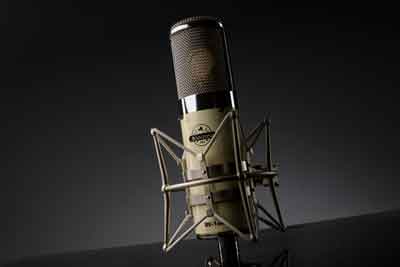 As Avantone Pro opted to take a ‘spare-no-expense’ approach to microphone design during development of the BV-1 mkII tube-driven, large-diaphragm condenser replacement for the discontinued BV-1, its popular predecessor that established itself as an essential element of world-renowned recording studios and home-based setups alike as a result of its hitherto unmatched combination of quality, durability, and value, every single component for the new design was, likewise, chosen for its sound quality. It is for this reason that the affordable high-quality studio monitors, reference headphones, microphones, and accessories producer chose capacitors from no fewer than six different companies — France’s Solen, Germany’s EPCOS, Germany’s WIMA, Japan’s ELNA, Japan’s Nichicon, and the USA’s KYOCERA, even going so far as to directly work with many of them to manufacture custom capacitors specifically for the BV-1 mkII as only the very best could capably deliver the sound quality being sought after.

As such, the BV-1 mkII also features an output transformer custom-designed by Californian company CineMag — originally famed for its tape heads for cinema before moving into in-house manufacturing of audio transformers and inductors — as well as a handpicked, edge-terminated 34mm (AKG) CK12-style capsule, culminating in Avantone Pro’s latest tube-driven, large-diaphragm condenser microphone design demonstrating a huge bottom-end and a smooth yet airy top-end. The proximity effect lends itself to a massive sound that can add both body and a sense of presence to any vocal take — not just BVs (backing vocals)!

Veering off on another note, the BV-1 mkII also comes complete with a suite of all the accessories anyone could conceivably need — namely, a power supply of similarly ‘spare-no-expense’ standing in keeping with the microphone itself, together with an associated ultra-high-quality connecting cable custom-made by SOMMER Cable Germany as one of the very best 7-pin examples existing, thanks to the thicker-gauge conductors for the valve heaters and heater ground that ensures that the vacuum tube is always being provided with the best possible current.

Clearly, such a prized package needs to be protected, which is exactly why Avantone Pro provides a hard-shell briefcase with which to conveniently keep everything together, including a shock-mount to hold the microphone snugly and also a pop filter to assist with recording in even the toughest environments — not forgetting, of course, the wood presentation box that safely stores the treasured BV-1 mkII microphone itself.

It is fair to say, therefore, that while the affordable high-quality studio monitors, reference headphones, microphones, and accessories producer’s original BV-1 remains a top-tier contender as a world-class vocal microphone, the expanded versatility of the BV-1 mkII also makes for a clear-cut choice for use with brass, mandolin, percussion, and piano — even guitar cabinets. Clearly, then, the BV-1 mkII is, indeed, made for anything.

The BV-1 mkII is available at Avantone Pro’s US Dealers for $1,099 USD. For further information, visit https://www.avantonepro.com/en/products/bv-1-mkii.

March 01, 2000 37168
There’s an old saying about choosing the right tool for the job, and that’s as true in the production room as anywhere else. We’re all doing more production work on tighter schedules than ever before, and our equipment has to be...
Read More...
© 1988 - 2022 Radio And Production, LLC
Go to Top