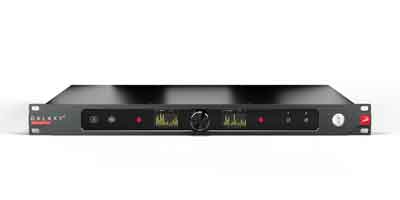 Flexible, full integration is at the core of Galaxy 32 Synergy Core’s design. Discerning users can connect all their gear to an attractive 1U rack-mountable chassis with the audio interface itself handling all routing, recording, and monitoring thereafter. To have Galaxy 32 Synergy Core acting as the hub of an interconnected system is to have an I/O channel count of up to 64 channels of recording and playback via Dante® with all I/O of the audio interface always available.

With Galaxy 32 Synergy Core, input and output channels are aplenty, thanks to an array of ports for further digital connectivity:

The transparent mastering-grade converters and the same 64-bit AFC™ technology found in Antelope Audio’s acclaimed master clocks combine to deliver unrivalled performance for the entire studio setup with up to 130 dB dynamic range. All allow for experiencing a new level of detail in recordings and a wider soundstage for an exceptional stereo image in audio playback.

More processing than you can imagine. Galaxy 32 Synergy Core’s implementation of Antelope Audio’s acclaimed Synergy Core real-time effects processing platform allows up to 128 effects instances available as 32 virtual racks of eight effects each in a single session to be loaded simultaneously and applied in real-time during monitoring, post-production, and live recording with imperceptible latency and no host CPU load to boot.

Beyond that, the interface comes complete with a collection of 37 Synergy Core effects modeled after classic and rare analog outboard gear, comprising 18 equalizers, 12 compressors, two preamps and channel strips, and five special processing effects. Expanding upon that collection is always possible, thanks to Antelope Audio’s ever-growing effects library encompassing emulations of classic gear and third-party specialist effects, starting from only $55.00 USD/€55.00 EUR.

Galaxy 32 Synergy Core will be shipping in Q2 2021 — at a projected price of $4,895.00 USD/€4,895.00 EUR — and available through Antelope Audio’s growing global network of authorised dealers. More at https://en.antelopeaudio.com/products/galaxy-32-synergy-core/.

March 01, 2002 6768
by Steve Cunningham I like shareware software in general, and not because it’s inexpensive (although it usually is). No, I like it because it’s often the product of one or two manic programmers who, because they couldn’t find a...
Read More...
© 1988 - 2022 Radio And Production, LLC
Go to Top