“... And Make it Real Creative!”: Just In Time For The Holidaze 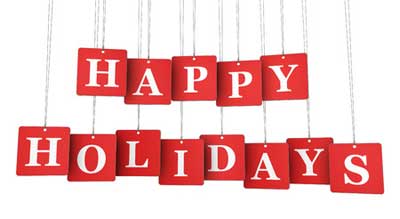 Holy crap, it’s time to dust off the holiday elements again. Don’t believe me? I guess you haven’t been to the drugstore the past month. Halloween, Thanksgiving/Black Friday, Christmas/Hanukkah, New Year… all breathing down our necks, ready to swallow every spare second whole.

I have friends in the voice-over world who have been at it for months now. Yeah, when it comes to holiday production, radio stations are slow to get in the game. On a national level, it takes so long for everything to go through the vetting and approval process that a lot of production for “the holidays” happens in the Spring and early Summer, while the planning likely began in January. Think about that for a moment… months, dedicated to planning and producing one ad! Granted, it’s generally an entire campaign but just imagine that. Months… not days, hours, or minutes.

When I talk to people in the “real agency world,” I hear the disdain, “Oh, you come from RADIO?” It’s a little like the way someone might say, “Oh, you LIKE Coldplay?” In the minds of the “marketing gurus” radio gets treated like a bastard step-child… If you cut your teeth on radio advertising, you can’t possibly understand “real advertising.” It’s elitist and frankly, wrong.

How did we come to this? Wait, don’t tell me… we did it to ourselves, yeah, that old chestnut! There is a lot of great radio out there, and there always has been, but it’s the bad radio (yes, I know it can come from the big guys too) that always gets noticed.

I’ve mentioned before that I’m a magician, and at the risk of breaking “the code,” I’d like to share a little secret with you. People hate card tricks. It’s true. If a magician pulls out a deck of cards for a group, at least several people will roll their eyes and say, “Not a card trick!” Do you know why they do that? Because the only card tricks they’ve ever seen were performed by Uncle Fred at the family reunion growing up, and he SUCKED at performing a card trick! Why wouldn’t they hate card magic, if they had never seen real card magic? Yeah, radio advertising is like that.

“I can’t do anything about it!” I can hear the anguished cry. I get it; we produce so many ads and promos in a day that the average Madison Ave. boy would huddle in the corner and suck his thumb if faced with it. The pressure to “just get it on the air” wears on a soul, and sometimes… sometimes… we cave. I would like to suggest that we knock it off.

This is a fact: anyone left in a position of production at a radio station or group is good, really, really good. A Creative dynamo, who can spew great script concepts off the top of their head, turn a phrase that can bring a tear to a listener’s eye one moment, then pull off a hilarious character voice the next, and mix audio like they engineered the latest Hollywood blockbuster. A radio Creative can do it all, and do it well, especially when they demand the chance to do their best.

I’d like to challenge you in the coming holiday season to really bring it, and if there are outside forces that are pushing you to settle, don’t give in. Radio deserves it, and just as important, YOU deserve it. Let the advertising hipsters play their little disdain game. They could never do what you do… not as fast, not as well. Radio advertising is NOT second-class, it was the first class, offering targeted marketing decades before digital marketing. I like to think of it this way; we get a later start on our holiday production... because we can.

Trent dabbles in writing, audio, voiceover, & music. Share your victories with him: .

March 01, 2002 6772
by Steve Cunningham I like shareware software in general, and not because it’s inexpensive (although it usually is). No, I like it because it’s often the product of one or two manic programmers who, because they couldn’t find a...
Read More...
© 1988 - 2022 Radio And Production, LLC
Go to Top