My favorite radio insider joke goes like this, “We’re in the Communications business!” I think I had only been in my first radio job for a month before I got that one. We were running a contest to win dinner at a local restaurant, and I witnessed “communication” in action, when the Rep in charge of the restaurant account burst into the PD’s office. 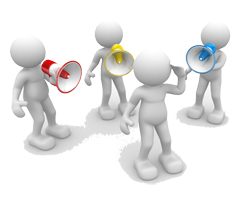 Rep: “No, I told the GM to tell you that the buy has been pushed back!”

PD: “And the GM’s assistant told me it was pushed back to THIS week!”

Rep: “And she told ME that the contest was coming out of YOUR promotions budget!”

PD: “WHAT promotions budget? Corporate told me it wasn’t approved…”

The “conversation” continued, but the resolution was that there never was a resolution, and the 5 winners never did get their gift certificate to the restaurant, but were instead forced to stomach the then “new” Culture Club album (yes, this was that long ago).

I’ve seen this same battle played out, in one way or another, at every station I’ve worked at over the years, and from what I understand it continues to this day. Two groups, Programming and Sales, both supposedly on the same side, fighting it out over every possible issue. And we complain that politicians can’t get along… really?

The real issue always seems to be that hold your sides, laugh until you pee, one-liner, “We’re in the Communications business!” Yes, we fire up a transmitter and broadcast news, weather, sports, music, talk, fart jokes, on and on… but outside the studio, there’s often an atmosphere that any high school kid would recognize… little cliques, living in their own worlds, only venturing onto the “hostile alien planet” when it’s absolutely necessary… and more often than not, when there’s a problem that’s already spinning out of control.

Honestly, high school is a pretty good analogy for this mess, not so much the “them vs. us” attitude, but more what’s inside of everyone, on every side… the feeling that they are alone, the only one trying, and completely misunderstood.

Am I suggesting that everyone in radio is acting like a child, trying to find their way? Honestly, sometimes, yes. If that stings, I’m sorry… but really, can’t we all get along?

Perhaps we can’t. The jobs that Programming and Sales do couldn’t be more different. The PD’s job is to keep those listener numbers up, and the Sales Rep’s job is to keep the revenue flowing into the station. Why wouldn’t one of the main battlegrounds between the two be the Production Department? “All those commercials are killing time spent listening,” while at the same time, “We need MORE commercial avails every hour to make budget!” The entire structure invites, no, encourages confrontation.

So, what about those of us in Production, the one’s “caught in the middle?” Sure, we might pick a side, but the truth is there’s always pressure from both Programming and Sales, depending on what project you’re working on at any given minute. I won’t lie, I’ve thrown hissy fits at PD’s and Sales Managers over the years, for a variety of issues -- usually small things that have grown into big problems because “someone” didn’t communicate. I’m not proud… often that someone was me.

I’ve suggested this before, but it bears repeating… it’s time to knock it off. I don’t care who is right or wrong, I don’t care who started it, or who did what to who. KNOCK IT OFF AND WORK TOGETHER, or as God as my witness, I’m going to stop this car and… uhm, sorry. Got carried away.

Seriously, though, it’s time to put the rivalry aside and start working together, if radio is going to continue. There are too many other advertising mediums out there to choose from these days, and radio needs a united front to stay vital. And that means, everyone needs to finally, really, start COMMUNICATING.

As the department stuck between the two opposing “super powers,” Production seems the natural group to begin the healing… and the conversation. Yes, someone (possibly more than one) has driven you crazy, and you’ve decided that the best way to deal with them is to avoid them as much as possible, but I’m going to suggest a new tactic… talk to them. Invite dialogue; get to know them, their style, and their needs. Forget yesterday, be proactive and suggest solutions before possible problems arise, and encourage conversation rather than avoid it. Who knows, somewhere in that conversation, you might just find another human being who wants the station to succeed as much as you do.

“Communication” shouldn’t be our punch-line, it needs to be the way radio succeeds.

January 01, 2011 5946
by Steve Cunningham Users of Nuendo 4 have waited nearly three years for the new release of Steinberg’s flagship multitrack audio editing product; this column hasn’t looked at Nuendo since version 3 back in 2005 and believe me,...
Read More...
© 1988 - 2022 Radio And Production, LLC
Go to Top