I feel a bit like the boy in the Hans Christian Andersen tale of The Emperor’s New Clothes, though I’m not nearly so brave as he. You remember, don’t you? Two weavers promise an Emperor a new suit of clothes that will be invisible to those unfit for their positions, stupid, or incompetent. When the Emperor parades before his subjects in his new clothes, a boy cries out, “But he isn’t wearing anything at all!” 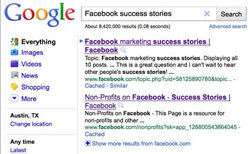 The Internet is the parade we’re watching and Facebook is its emperor. I’ve seen “naked” and this emperor sure looks it, but I hesitate to shout it out loud because this would be tantamount to a confession of professional incompetence.

The first Internet buzzword was “eyeballs.” Any site that could generate a high number of unique visitors and page views was said to be overflowing with eyeballs and its creator was considered a genius. But eyeballs didn’t translate into dollars unless you delivered a message to the brain behind those eyeballs that was judged to be highly relevant and sufficiently credible.

Next it was about “going viral.” My office was deluged with a river of advertisers asking, “How can we take our message viral? We want to go viral. Do you know the secret of going viral?” I told these advertisers, “Going viral is what happens when traditional word-of-mouth is empowered by digital technology. Do you have a relevant, credible message that contains at least one of the essential three word-of-mouth triggers?”

“Eyeballs” and “going viral” faded away due to a lack of success stories. I breathed a sigh of relief.

“Talk is cheap. Where I come from, in the auto industry, you were held brutally accountable for your programs and products. The response to any idea was, ‘Show me where it’s working.’”

Lee is right, kids. Talk is cheap. Show me where it’s working. Google “Facebook success stories.” I did. Prepare to be underwhelmed.

Facebook promises hypertargeting but this has been the promise of every media since the invention of advertising. Newspapers have been divided into sections for nearly a century. “Do you want to target men in the Sports section, women in the Lifestyle section, or businesspeople in the Business section?” Magazines were invented to allow us to target micro-groups that shared a common interest. Television and radio stations promise psychographic targeting through specific programming. Billboards promise tightly controlled geographic targeting. And each of these media is hampered by the same limiting factor as Facebook and Twitter. It is an inescapable truth: Response to your message will be dictated by its relevance and credibility, not by the vehicle of its delivery.

There is benefit to be had through a presence on Facebook. Twitter is a quick way to blurt 140 characters to whomever will give you a moment’s attention. If you enjoy these things, do them. Your business will certainly derive some benefit.

But they are not the highest and best use of your time and energy.

This whole “Facebook and Twitter” thing reminds me of a conversation I had with a client 14 years ago in Milwaukee.  Working together we had grown his business 10-fold in just 5 years. That’s right, one thousand percent growth. He was swimming in cash because he was tenacious, hard-working, had excellent judgment and his employees loved him. All I had done was help him focus his message and his ad budget. When he arrived in Austin for his annual marketing retreat, he said, “This year I want to spend 20 thousand dollars of the ad budget for a country club membership. I really believe I can sell some product on the golf course.”

Knowing my client loved to golf, I said, “Sounds like a great idea. How often do you plan to golf?”

“Every Tuesday,” he answered.

“I’m okay with this plan as long as we agree that you’re going to be the one responsible for selling on the golf course, not me. If you can’t make it work, it’s your fault, not mine. You okay with that?”

He was okay with it. He bought the country club membership, began playing golf every Tuesday, sold a little product on the golf course and he’s still a client today. But his business is now more than 50 times the size it was when we first began working together. My client continues to golf every Tuesday but he doesn’t pretend that golf is what built his business.

If you like to golf, do it. Steal a few moments of your life for living. Make time for the things that give you pleasure. Facebook is a country club membership. If connecting on Facebook is your thing, go for it.

But please, let’s not pretend it’s the highest and best investment of your time.

January 01, 1996 9219
by Jerry Vigil The Fostex Foundation 2000 hit the scene in early 1994 as a powerful, expandable workstation priced well into five figures. It came with a ton of features including internal digital mixing. Fostex recently...
Read More...
© 1988 - 2022 Radio And Production, LLC
Go to Top