If you’ve been in radio long enough, you’ve seen the transition from the analog days to the digital era. You’ve seen computers popping up in practically every room in the station. Cart machines are history. Typewriters and tape are a thing of the past for the most part. But are you really using today’s technology to its fullest? Terry Thompson recently took the job as Production Director at Waitt Radio’s 8-station cluster in Omaha, Nebraska (market rank #74). It didn’t take Terry long to discover that his 12-hour days were due in part to a lot of wasted time, time which he reclaimed by implementing a production system designed for efficiency. The results were dramatic. Terry outlines his system in this month’s RAP Interview and even offers to help you do the same. And check out his demo on the RAP CD for a sample of the caliber of work his department is able to produce given the much needed extra time and re-organization.

JV: How did you get into radio?
Terry: Ironically I got into radio through film. I went to school at the University of South Dakota because they were the only place in South Dakota that had a film school. I get there and in my first semester they closed the school down. So I figured I’d just move over to TV and have a little TV action. Well I found TV to be extremely boring, you know, directing the news and such. I did radio because it was required for my degree, and I found out radio allowed me a creative outlet that was virtually instant. You can run into a studio, create a bit or do a break, or create a commercial that would make somebody laugh or whatever, and it only took you an hour or so; whereas in TV or film, it could take days or months. So I caught the radio bug back in 1989.

JV: How did the gig at the Waitt Radio stations in Omaha come about?
Terry: I was working for a six-station group in Sioux Falls, South Dakota eight years ago as a Production Director, and I came down here to tour the famous Sweet 98. I asked the other production guy there, “Hey, how’s a guy get into this market?” And he goes, “Well you apply for the job over there at the Edge.” The Edge was the radio station that had just started. So I drove back to Sioux Falls that very moment and sent my demo using the old DCS system, if anybody remembers that. They called me the next day, and I got the job. I’ve been here since.

JV: Sounds like you’ve had the Production Director position for some time.
Terry: Actually, I have not. I was Production Director in Sioux Falls for about two years, and when I came down here I was strictly a producer and writer because I worked almost exclusively for the Edge – it was an alternative Rock format. That was my primary ship, and I just basically sat in the studios ten hours a day producing and writing. And then we moved into our new location and gathered ourselves eight stations. Ed Thompson was the Production Director at the time. Then I took over for him. We just basically switched positions, which happened about eight months ago.

JV: What are your responsibilities now?
Terry: Since I became the Production Director, I no longer do the imaging. I now produce the commercials for all eight stations. Ed is my main copywriter and producer. All of our imaging is outsourced.

JV: So there are two guys doing all the copywriting and production for eight stations, right?
Terry: That’s correct, and most of our business is direct, so there are lots of commercials to produce. We also have a part-timer who helps out every Wednesday through Friday from 2:00 to 7:00, and we have a great on-air staff that helps with dubbing, and they produce also.

JV: About how many commercials would you say you guys are producing on the average week?
Terry: I would say anywhere between fifteen and thirty, which is not too crazy. But we also write a ton of specs. As far as total production orders filled, last week we had 238 production orders come through the pipe, and I would say probably 150 or so were straight dubs. 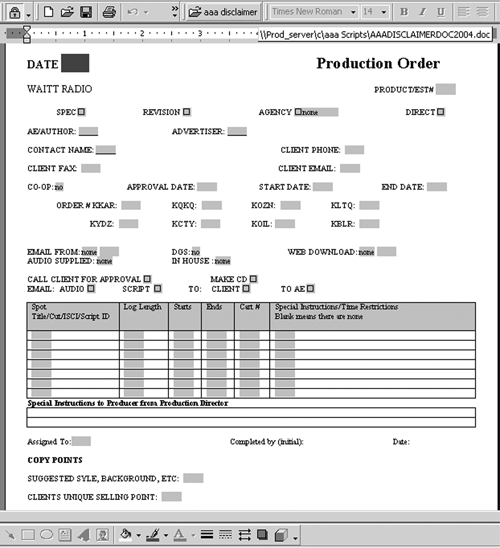