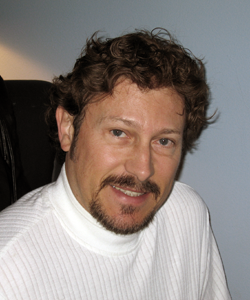 As you may be aware, Radio And Production had its 20th birthday this past November. It was 20 years ago this month that the first Radio And Production “Cassette” found its way into the mailboxes of our few charter members. On that cassette was a promo for the Glenn Beck show on KRBE in Houston, Texas, sent to us by KRBE’s Production Director, Eric Chase. Wait. Don’t get confused. There’s more than one Eric Chase. In fact, there are three well known Eric Chase’s in our industry. We sort all that out in this month’s RAP Interview with the Eric Chase that landed at some of radio’s greatest radio stations in his illustrious career and now does his own thing in the voiceover and production world through Eric Chase Creative Services, which has been servicing radio clients and more for nearly two decades. Find out more about this Eric Chase at www.eccsvox.com, and be sure to check out some of Eric’s demos on this month’s RAP CD.

JV: You got into radio a little earlier than most, at the age of 13. How did that come about?
Eric: Well, it was way pre-internet, and we had to have a place for nerds in our town. I was probably perfectly suited for radio at the time because I wasn’t an athlete. So I just kind of stumbled into a station in my hometown; it was KBHS in Hot Springs. Believe it or not, the slug line was, “Where the world bathes and plays.” I remember when they used to say that on the radio, and I thought that was kind of cool. Not many cities can attribute to themselves being known as the bathing city.

So it was a hot summer afternoon. I was walking down the only street, called Central Avenue, that was in the middle of the town. The door was open to this building that looked like an interesting place. It was actually a studio. It was the radio station. The guy in the studio had the door open because his air conditioning was out. He was a guy in high school, and I was just barely in junior high. He invited me and my friend in and showed us all the stuff. It was like industrial radio station stuff, you know, Ampex’s and turntables that were huge. It looked like everything was fortified with iron at the time -- and all tubes, of course.

So I pulled in and I said, “This has got to be the place that I want to be,” because it was like magic to a kid. And I’d always sort of played radio station at home with my dad’s old tape recorder, so I kind of was ready for it.

I started at the janitor level, and then within about six months, I was doing the Sunday morning 5:00 a.m. thing, opening up the station with the religious programming. My voice broke early, thank goodness, and so I started doing little shows in the afternoon while I was in junior high and high school.

Then I got a big break to go to the big station in Little Rock, which was KAAY at the time. I enjoyed being on the radio live, but I also always enjoyed working in the studio with the tape recorders and the turntables and other gear. In my downtime I would make commercials and stuff. I realized somewhere in the middle of my radio career that I kind of liked the studio and the voiceover better than I liked being on the air live every day, because on the air, you had to be the same guy every day. And me, I was a little schizo, so I would try different characters. One time I’d go on the radio and I’d be Mr. Cool [in laid back voice], and the next day I would go on the air with this big booming voice, like “hey, it’s Power one oh four!” So the Program Directors thought, you know, we can’t control this guy, and I wound up moving more towards the studio, which is kind of where I still am, doing voiceovers and things.

But, you know, radio is great. It was ‘89 was when I submitted that Glenn Beck promo, and I was getting toward the end of my radio career at the time. I got out of radio in ‘91 and didn’t look back after that.

​JV: So you got into radio in the ‘60s, is that right?
Eric: Late ‘60s, yes, and my last station, right after KRBE, was 93Q here in town, which was winding down its Q Zoo radio format with John Lander. After he left, it wasn’t long after that that the station changed to country, which it still is. So that was kind of like my parting from radio. I had put a lot of years in, and radio can be a burnout, especially back in those days. It was actually work. It was pre-digital, so we had turntables. We had cart machines. You were running your own board. It was not nearly as automated as it is today. Those aspects of radio are pretty much gone. I think everything today is pretty much laid in there with the computer. At that time, though, it was a very organic kind of experience for the person who was on the radio -- unless you were one of those lucky ones, like when I was at WRKO in Boston, where we actually had an engineer that ran the board and we were in a booth. We were not allowed to touch the equipment, because we had unions that separated us. So that was kind of a luxury.

But in the real world of radio, pretty much you ran everything. It was hard to believe that you could be at a radio station, the only guy there, running the station, doing the news, doing whatever they wanted you to do. And of course, if you went berserk, you could be on the news, if you wanted. But not many of us went crazy back then, because for some reason we feared the FCC would lock us away forever. I don’t know what the mindset is now.

I think that one of the reasons I left was that I saw radio taking a turn, and I just wasn’t enjoying it as much. But the challenge of voiceover, the challenge of sound design, has always stayed really strong with me, and fortunately, that’s what I chose to do. But I always have a great kinship with radio when I hear it, and the younger guys coming up, I kind of relate to them a little bit these days.

JV: Were you a jock through most of your radio days?
Eric: Oh, yeah. I always wound up doing a show. Even toward the end when I was basically the Imaging Production Director of KRBE and also 93Q, I would do a show just to stay sharp. You can lose your skills really quickly if you don’t do a little live radio. Live radio also puts you in that spot where you can’t make mistakes. Well, you obviously make mistakes, but you are at a heightened sense of awareness as a performer, so you really don’t make as many mistakes because there’s adrenaline pumping through you. When you’re in the production studio by yourself, you can always do another take and edit it together. But on live radio, you can’t. There’s a discipline there that I always liked about radio. When you’re on, if you’re going to be an ass, everybody’s going to know it -- and that was before they had the buttons you could push for the expletives, the delays. Everything was live, in real time.