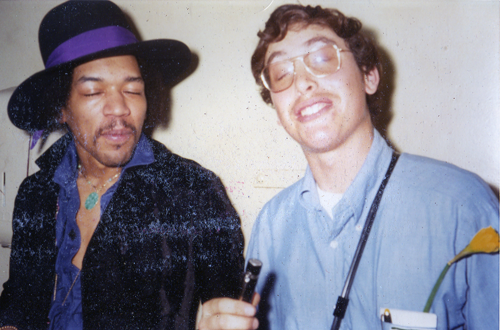 JV: That’s an amazing run in a career that sounds like it’s not slowing down a bit.
Jay: My career has just been so much fun. I’ve had this great opportunity to move around a lot. I’ve really appreciated that and I’ve worked with some of the greatest people in the industry, really talented people.

At this point, I’m doing more teaching. I’m developing a website called VoiceOverSchool.com because I’m doing more and more teaching. I’m teaching national voiceover tele-classes for Susan Berkley at the Great Voice Company out of New York, and teaching private seminars as well. I just got back from teaching a three-day boot camp in West Palm Beach, Florida, and we’re doing another big boot camp in August in Sausalito, and I’m teaching a private workshop, here in Santa Rosa.

So I’m doing more and more teaching. I feel that at this point in my career, going into my 40th year next year, which is unbelievable, I just want to share what I have with whoever is interested; and I enjoy doing that very much. And I continue my freelance voice career, which is going pretty darn well.

So I have this full-time job that I enjoy very much, and I’m doing freelance on the side and some teaching, and that kind of fills up my whole career right now. At last count, it was either 17 or 18 radio stations in my career. I’ve had this wonderful opportunity to work with so many people and learn so much, and I continue to try to learn a little more each day about the craft that I love and to share it when I can. At this point in my career, I’m still enjoying it very much. But like I said, I’m moving a little more into the teaching side and the voice acting side. I probably have another five years in me, I guess, working in radio. I don’t know. I guess I’ll do it as long as it feels good. Where I am is a very stable environment. The Production Director that was there before I joined had been there 15 years, and I’m going into my third year here.

I really enjoy it — great people and good ownership, and it’s not part of a big corporate conglomerate, which is what really tired me. I was almost ready to be done with radio because the corporate climate and the non-creativity I saw was so blatantly happening. But this has really changed my mind. It’s a smaller market, but the man has built a beautiful facility and offered me everything that I ever wanted, in terms of studio and supplies and support people, and a budget to hire outside talent and etc., etc. It’s really a great opportunity, and I enjoy going in every day still.

I loved working at KNBC in LA. It was a sports format, and I’m not a major sports guy. It was a lot of fun working with this super fun group of people who are really into sports, I mean just crazy people, doing sports radio and doing a lot of imaging. I was doing voice work for the Sporting News Network that aired nationally, and that was also a fun time for me. I continue to watch the trades and see where some of my old buddies from San Francisco and LA are, where they ended up and what they’re doing these days. I love keeping up with them and hearing about their careers.

JV: You mentioned your own production company that you did back in the ‘90s for eight years. That’s a dream a lot of our readers have, to break away from radio and make it on their own. Tell us a little more about it. Why did that go away? Why did you get back into radio?
Jay: Well, I was in a partnership with Peter Holter. Our company was Two Guys in Radio. It was Peter Holter, who was an ad agency guy, and I was coming from radio with the creative and all that. When I decided to put out my shingle starting out, he was my first client. Suddenly, he was bringing me $30,000 worth of business a year as my first client. He and I got along splendidly, and we lived about a half mile away from each other. He said “Hey, why don’t we do something together?” So we started this company, Two Guys in Radio. He was the sales arm and the marketing arm of the company, and I was more on the creative side, doing the writing, producing, voicing, casting, directing, and all that. He was a voice talent, too. We worked together for almost ten years, and he went through some personal changes and ended up moving to Albuquerque, New Mexico; and I got this job offer from Comedy World. It all happened at the same time in 2000. It was a great salary offer and I ended up moving to Malibu. Peter and I just decided to go our separate ways. He and I remain friends and we’re still in touch. He ended up getting a great job that he loves. He’s in Albuquerque and I’m still a California boy.

April 01, 2000 6964
by Steve Cunningham This month we’re going to assemble the Ultimate Stereo Editor for radio production on the Mac platform. Our Ultimate Editor has to be fast, stable, flexible, and it has to sound great. It has to be able to...
Read More...
© 1988 - 2022 Radio And Production, LLC
Go to Top