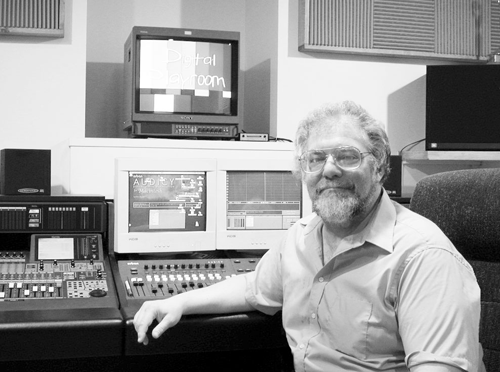 If there’s a mad scientist of audio and production out there, it may well be Jay Rose. Jay’s specialty is audio production techniques for broadcast and multimedia. He created and programmed the Broadcast Production software for Eventide’s DSP-4000 Ultra-Harmonizer. He is a long-standing member of the design team for Orban’s DSE-7000 and Audicy workstations, was the lead developer for Audicy’s audio-for-video and broadcast effects subsystems, and was its spokesperson at industry conventions for ten years. He has consulted on broadcast product design for Lexicon, and he has run broadcast production seminars for CBS Radio, the US Air Force, and Universal Studios Florida. As a sound designer, his clients include PBS, Buena Vista Television, Turner, CBS, Group W, A&E Network, Discovery Networks, and dozens of radio and TV stations in large and small markets. Corporate audio clients include IBM, Hewlett Packard, Harvard University, and John Hancock. Feature film projects include sound design and editing for “Two Weeks” (Sally Field, Ben Chaplin, Tom Cavanaugh; MGM, December 2006), plus festival-winning local independent films. His “Digital Playroom” includes multiple high-speed DAWs, professional video support, with a generous assortment of high-end effects and an immense music and stock sound library. Jay has won over 150 major broadcast awards as writer, producer, or director, including 13 Clios, and New England Broadcast “Best of Show.” Jay also teaches sound design and editorial techniques at venues such as the DV Expo, Toronto NewMedia Expo, and MacWorld. He is a featured columnist for Digital Video Magazine, and has a couple of books of his own. His most recent one, Audio Postproduction for the DV Filmmaker, while marketed to the DV filmmaker, is packed with a ton of information pertinent to what we do in our studios for radio broadcast. This month’s RAP interview makes a return visit to Jay’s Playroom where we find out what Jay’s been up to since our last visit, and we get a sneak peek at his latest book.

JV: It’s been 11 years since we talked to you. What’s new?
Jay: Well, I’ve actually been semi-retired for the past 20 years, and I’ve managed to be extremely busy during most of it. What have I done recently? Some new software for Eventide, which is shipping in their newest DSP units — a whole bunch of walk-in instant effects, using a lot more power that the new DSP chips have.

They gave their boxes funny names. The Orville was their box starting in the late ’90s, which was much, much more powerful than the old DSP Harmonizers. Now they’re using what they call the H8000. Imagine a rack full of DSP4000 Harmonizers. And you can just go nuts. I’ve got things in there that, for example, take the intonation out of a voice. So if you’ve got somebody who’s actually putting a lot into the read, and his pitch is going up and down and all over the place, it turns him into a car dealer or a robot, but without the robotic sound. It just pulls the emotion out. It’s an emotion drainer. And then I use it the other way, to step up the emotion. So if a person is moving from A to B, I move him from A to C. I’m using A and B and C as range of emotion, rather than musical notes here. So if he’s slightly monotone, like your car dealer, you run him through this, and it almost gives him decent expression, based on what he did. It magnifies his pitch variation.

JV: The Harmonizers back in the day were in a lot of radio stations. Are they still today?
Jay: That’s what they tell me. And they’re in rental catalogs in Hollywood. Guys are renting them for the day to use on dub stages in films. I’m pretty sure they’re still moving them. They’re still sending out PR about my new presets. One of the guys at Eventide told me they’ve been selling a lot of them to the remix guys, to the rap/hip-hop guys, and they’re running music through my presets, which were designed for radio production, things like the Helicopter patch and stuff like that.

JV: What else has kept you busy in the past few years?
Jay: About a year and a half ago, I did a Hollywood feature. It’s coming out on MGM in two months. Biggest thing I’ve ever done of that nature. This was the full sound design, dialogue edit, and music edit for a film starring Sally Field, Ben Chaplin and Tom Cavanagh. This was a dramatic film, actually a comedy/tragedy. I did everything from basic dialogue clean-up, music edits, to supervising the mix. I had to do some surround effects for it, so I took the Eventide eight-channel unit that I have, and I used four channels to generate the surround effect, and four channels as a surround monitor controller. It’s saving me about $2,000 worth of hardware, just on the monitor itself. And when you’re doing surround, first of all, you have to match the speakers, so each speaker was separately equalized. Then you want to be able to control different combinations of them. It was faster for me to just write a couple of lines of code and pop it into Eventide and solder together some switches. But at the same time, what I was doing on the Eventide was creating a voice and airplane background that swirls around the audience — totally disorienting.

JV: It sounds like you’re still having fun.
Jay: It is fun. I’m having a hell of a good time. It was the end of ’87, 19 years ago, that my wife persuaded me to quit the big downtown studio and just do stuff out of the house and only work on the projects that I wanted to. There’ve been a couple of dry periods, but by and large, it’s just been one fun thing after another.

I’m starting a film starring John Malkovich. I just met with the director yesterday. This will be more audio for film. I’m also doing some radio commercials for MGM – writing and producing.

JV: You were doing a lot a radio commercials in the past as I recall.
Jay: I used to be totally radio. I came from a station. I did a lot of midnight station production. I remember doing an all-nighter one Saturday night so that I could listen to this awesome thing that I produced for Sunday morning in the religious “ghetto.” It was a documentary production that they let me run on a Sunday morning, but I was going wild with what I was putting into it.

JV: So you were doing nothing but radio stuff for a long while, then started doing more audio for film.
Jay: Right. What happened is, as the technology made it easier and easier to do sound in sync for film and video, I moved in that direction for a very, very simple reason: the budgets are bigger. I’m given more time to play, and there’s more I can do. It’s still radio sound; I just have to make sure it keeps up with the lips on the screen. But that’s so easy now with the software that we’ve got. Actually, I was the first person in New England to have computer-controlled sound for video — decades ago. My studio was only radio, and this new technology of SMPTE control came out, and I convinced my wife that we should invest in it. It was a lot of money, but suddenly, I was able to actually have the sounds that I wanted to hear in my head happen on the screen. And it’s just gotten better and better since then.

June 01, 2008 6038
by Steve Cunningham We last reviewed Magix’s Samplitude software editor three years ago (see RAP May 2005). Since then the program has undergone two significant upgrades, each adding more functions to what was already a strong...
Read More...
© 1988 - 2023 Radio And Production, LLC
Go to Top