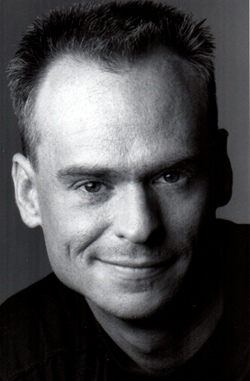 This month's interview stops at powerhouse Power 99 in Atlanta where Creative Director Keith Eubanks cranks out the club spots in style, and in large numbers! Keith shares some of his secrets to cutting the club spots you've heard on past Cassettes and gives us some insight into dealing with the club owners and managers who ask for blood daily. If you cut your fair share of club spots, you'll relate. If you don't, smile!

R.A.P.: Where did your radio career start, and how did you wind up at Power 99?
Keith: I guess it started back in 1975 when I was just getting into high school. If I remember correctly, I couldn't even drive yet. I started here in Atlanta at a 5,000 watt gospel station in East Point. The people they catered to were like blue-haired ladies in nursing homes. It was blue grass, country, hillbilly gospel. The station probably had some of the first broadcast equipment manufactured. I talked and begged my way into doing some news and some on-air stuff here and there. That got me through high school. Then I went off to college at Auburn University. I got into general curriculum and did the business major thing. I worked at the college station which proved to be the greatest catalyst of all for me being in radio. It was then that I realized this was something I ought to be doing, not just to pass fun time in college, but for a living because I loved it so much.

While in college, I was fortunate enough to also get a weekend gig at WHHY in Montgomery. This was the first real radio job I ever had. Not only was I working weekends there, but during the week, I was working for a small AM station in Opelika doing some news and on-air stuff.

I got out of school and came back home to Atlanta and started working in advertising. I worked for McCann-Erickson in the broadcast traffic division. This was on a national level, and I got a real good feel for something that I didn't want to do. I learned that quickly -- a lot of paperwork. I worked with some great people, but I realized that was not my thing. I loved the environment that the ad agency offered, but I wanted to be up two floors in creative instead of down there pushing papers.

While I was at McCann-Erickson, I also worked part-time for a black AM station that was doing very well at the time. As I think about it, I've probably put in as much time in black/urban formatted radio as I have in pop radio. I left McCann-Erickson after about a year and went to another agency and piddled around with more computer oriented things. I finally ended up going full-time with KISS 104 when they started up to go against V103 here in Atlanta. I did afternoons and was their Production Director. I went from there to Z93 where I segued back into pop radio again. From Z93 I went to Power 99. I've been here for about four years now, and I can't really imagine being anywhere else. I've weathered so many things and seen so much happen that it feels very much like home.

R.A.P.: You were a late night jock at Power 99 for a while before you became Production Director. Was that the position you went into the station at?
Keith: No. I went in as nothing. I wanted to be on the station so badly that I started off doing the Casey Casem show at five o'clock Saturday morning. I did a little bit of research during the week and a little bit of production. I was just clawing for everything I could get. Then it escalated from there. I started doing some overnight things and worked my way into filling in for the girl who did ten to two at night. I'd do some board-op for the morning show during remotes and a little more production. Finally, I got the overnight shift which was my first full-time position at the station. Then, miraculously enough, I went from overnights to Production Director, and that just blew me away.

I learned so much from Randy. The neat thing is how I used to listen to the man in high school. I just admired his air work so much. Then, one day I was working with him. Now, I'm actually doing what he used to do, and it really blows me away.

R.A.P.: Most of your previous radio time was spent jocking. What made you decide to do production full-time?
Keith: It was mainly the positive feedback I got. People would compliment me on things I would do in production. After a while, a light went on in my head, and I realized this was where the ad agency interest I've always had comes in and meshes with the radio. I can work on the air, but I can also do these commercials which is something I've always loved to do. This is how I really like being creative -- taking sixty or thirty seconds and making it really stand out from what's around it.

R.A.P.: How is the production department structured at Power 99?
Keith: It depends upon the work load. Bars are probably our most common clients. We probably have fifteen bars on the air right now. We have to do fifteen different approaches for these bars, and everybody wants their spots to be different from everybody else's. A lot of stations have the Production Director doing it all. We're different. Everybody -- from the midday girl to the people on the morning show to the night guy and the afternoon jock -- does production. But they don't produce all of it all the time. Some people produce their own stuff because they're good at it and because I like the variety. If I produced everything, you would begin hearing the similarities on the air. If I allow Sean and Domino, our afternoon and night guys, to do production -- and they do great production -- then we'll have an overall better variety of production than if just one person does it. So, jocks do production, but they don't do a whole lot because I've taken a lot of that on myself.

I've got two assistants. One of them does pretty much all the dubs for me. He does no voice work at all. My other assistant, who just came on board, does do voice work, and he does great bar spots, so that made him an immediate asset. He also fills in for me when I'm off or working on the air.

November 01, 2009 7969
by Steve Cunningham It seems that about every two years Sony releases a new version of Sound Forge. Indeed, it’s been a little over two years since we last looked at Sound Forge version 9. Since the percentage of RAP readers who...
Read More...
© 1988 - 2023 Radio And Production, LLC
Go to Top