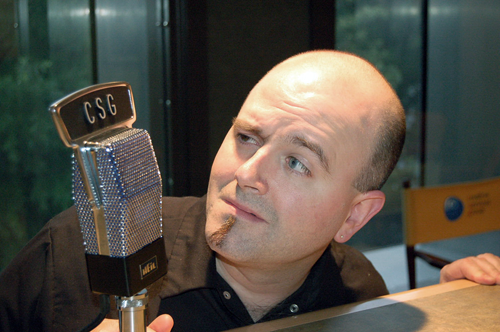 Each year after the RAP Awards, we like to visit with one or two of the new names that have popped up in the competition. One of those names is J.J. Foxx, the producer for the spot that won Best Commercial – Large Markets. The spot came from Clear Channel’s Creative Services Group in Atlanta, for which J.J. has been a producer/copywriter since early 2005. In November of 2004, we visited with Jim Cook, Sr. VP of Creative Services for the CSG and got the lowdown on the CSG and it’s newly launched “Less Is More” initiative. This month, we take a look at the CSG from the trenches. We learn a little about J.J. Foxx and a little more about this hard working group of people that make up the CSG, which has done a lot in the past couple of years to improve radio’s stopsets and clients’ pocketbooks nationwide.

JV: Tell us about your early years in the business.
J.J.: I feel like I kind of fell ass backwards into it. Like every red-blooded American boy, I wanted to be a rock star when I was in high school. I was a music junkie. I soaked up music and collected music and was finding new music all the time. As I got older, I realized, oh man, maybe I should have spent more time playing guitars than chasing girls and drinking beer and listening to music. So I kind of wandered towards radio. When I went to college, I picked the communications major, not really knowing what I wanted to do. But then I started gravitating towards radio as my college years went on, and I really submerged myself in college radio. The station was WFSE, and I did the on-air stuff, I was the Music Director, you know, I just did everything I could.

But it wasn’t until after college that I wandered into the production room. Believe it or not, I interned for Jim Cook when he was in Erie, Pennsylvania. I went to a college about 30 minutes away from Erie at Edinboro University of Pennsylvania and took an internship with Jim and the Promotions Director at the time, Neal Sharpe, who’s now the PD at the Link in Charlotte, North Carolina. I took an internship with those guys at WJET, Jet 102, and it was a real eye-opening experience with regards to what really went on in radio, and I became enamored with it all. When I graduated they didn’t really have a position for me, although they wanted me to work for them. So I ended up going to the country station in Erie, WXTA Country 98, and did part-time overnights and things like that. This was back in 1992. While I was there, Jim left Erie, and not too long after that I went back to WJET. I was an AE for like six months, and I’ll never forget that Sales Manager, when they hired me back he was saying, “don’t think I’m hiring you so you can get your foot in the door to get into programming.” Six months after that I was fired and hired on the same day. They fired me in sales, but hired me to do full-time overnights on JET 102 in Erie. Neal Sharpe at that point was the Program Director. While I was doing overnights, as it is with almost every job, at that time we had to do production. I already knew how to cart things up. I already knew how to do basic stuff. But when you go to work for a station where Jim Cook was, there’s a state of the art recording facility there. I’ll never forget that production room; it had a beautiful board. Don’t ask me what kind of board it was, but they an Otari 8-track reel-to-reel. Jay Bohannan, who is now the PD of the FM talk station in Pittsburgh, taught me how to use that production room. I would go in and experiment and do all kinds of things before I’d go on the air at midnight and just develop my production skills like that. Then a couple of years later, we made the move to a digital editor. I think the first digital editor I worked on was a Roland DM80, and Jay Bo taught me out to use that too. I was in a unique situation where I could experiment and develop my skills.

JV: Where’d you go next?
J.J.: Actually I stayed in Erie for a while. I left Erie in 2000, but while I was at Jet 102, I did every shift on that station, except mornings. I did imaging. I did commercial production. I did continuity, all at the same time. It was pretty busy. You learn how to get things done. Then in 2000, Jet Broadcasting was sold to NextMedia. I could have stayed on, but my wife decided that she wanted to see what else was out there. She’s a nurse and I kind of followed her. We packed up and our first stop was Atlanta. Jim Cook worked in Atlanta, and I had stayed in semi-contact with Jim over the years after he left Erie. I told him that I was coming to Atlanta and he said, “make sure you call me when you get here.” Once we got to Atlanta, I called Jim and he brought me on as a contract producer in the evenings for the Atlanta cluster for Clear Channel. We were here three months, and one of the PDs for WGFT here in Atlanta, Ken Charles, was moving up to Clear Channel Houston to take over the AMs in Houston. He was looking for production people. Jim got me talking to him and we ended up going to Houston at that point. I did commercial production for KTRH, KPRC and KBME.

I did commercial production there for about a year and then Jim called me in Houston and said, “hey, we’re starting up a station here in Atlanta that I think you’d be ideal to image.” That was always my goal; I wanted to do imaging. So my wife and I came back to Atlanta in 2002, and I’ve been here ever since. I did imaging for WMAX the 80’s Channel and 94.9 Lite FM. Then when the MAX went away and became Real Radio 105.3, I imaged that and continued to image Lite throughout that time.

Then when Real Radio went away, I was just imaging Lite, and that’s when Jim Cook and Bob Case starting talking to me about coming over to the Creative Services Group as a producer. We talked for quite a while about it and then I jumped at the chance because it just sounded fantastic, a job where you just get to be totally creativeall the time. When I came on board officially, in January of 2005, the Creative Director at the time was Robert Summers. We would all get together and kick ideas around, and he wanted to see if I could write. That time with him was like having a year’s worth of guitar lessons one on one with Eric Clapton. Robert took me under his wing and taught me some writing skills. It was just amazing. So now with CSG, I’m writing and producing.