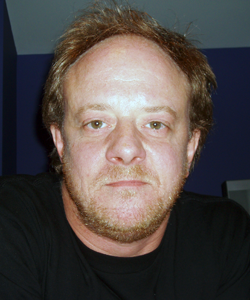 Jeff Thomas is easily one of the best imaging producers in the world. When we last checked in with him ten years ago [RAP Interview, October 1995], he had just left 2 Triple M in Sydney to launch Virgin Radio FM in London. After that, KIIS in LA lured the imaging master to the US. After several years with KIIS, Jeff finally went out on his own, taking his Killer Hertz libraries to the next level with Killer Hertz 5, an online imaging service at www.killerhertz.com. This month, Jeff talks about Virgin, about KIIS, about Killer Hertz, about imaging and more. Be sure to check out Jeff’s production sampler on the RAP CD for a tasty collection of some of Jeff’s best work over the years.

JV: When we last talked with you ten years ago, you had just left 2 Triple M in Australia and has just started imaging Virgin Radio in London. How long were you there?
Jeff: That lasted two and a half to three years. When I got there, Virgin Radio was already on the air in the UK as a national AM broadcaster. The job I was brought over to do was to launch it on the FM in London. They received an FM license for London only. That was pretty much the job at hand. When I got there they wanted to start with a series of test transmissions to start broadcasting on the FM band before they started putting programming through it. I pretty much hit the ground running. There was everything to do from the FM processing through to the station sound and audio brand for Virgin. The fun started from there, and there was a lot of work to be done.

JV: What’s one of the more memorable tasks of your tenure at Virgin?
Jeff: Part of the deal-making of getting the FM license for London was that they had to have a show which went for about 45 minutes that was purely dedicated to London, and part of that included having to have a band play live to air everyday. Being London, the kind of musicians and people that were coming in was pretty staggering. It was everybody from Robert Plant to Jimmy Page to The Stranglers, Gallagher, Elvis Costello, Sting, these kinds of people. I was there for three years and we did one a day, Monday to Friday. So in the end, I had clocked up mixing credits for about 300-odd sessions.

And in the end, it started to bring everything crashing down, because every afternoon at a certain time, no matter what you were doing, you would have to stop and prepare for this. What started out as being simple vocal and acoustic guitar kind of performances quickly became sessions where we were closing off the entire floor. We’d have drums set up in the boardroom, guitar amps running up and down the corridors all mic’d separately, singers in one room, brass in another sometimes. So in the end, it was simply too much to tackle. But the great thing about it was that having to work with these people and get these mixes ready to go to air in a short amount of time was a great experience for me, and it taught me that mixing properly is something that has a lot more to do with frequencies than just levels alone, and it really helped my work.

I’m a big fan of Mix magazine because of some of the articles that come out regarding mixing, and I think whether your first passion is music or radio, there’s a lot to be learned from just dabbling in mixing music. And now, with the Internet, you can download the latest Pro Tools session of the last Nine Inch Nails single for you to try your hand at remixing. There’s a lot of stuff out there that’s all good experience.

JV: Your next stop was KIIS in LA. Tell us how that came about.
Jeff: After the FM had launched and the station was pretty much up and running, I was looking at making the next move. Living in London had been a bit of a shell-shock after coming from Sydney, and I never really had planned to spend a long time there. It was a great experience and I definitely had a good time, but it was always going to be a temporary move.

At that stage, there were a couple of offers from the US on the table that were kind of half offers, but for all intents and purposes, I had planned to move back to Australia. But that didn’t happen. As I was on the plane flying out of London for the last time, I stopped over for a weekend at KIIS in LA to talk to them about moving there. After about four days there, I headed back to Australia just to get organized, and four weeks later, we were living in Los Angeles.

I had no idea at the time what kind of hoops and hurdles I was going to need to get through regarding immigration, and that was a long, drawn-out process. I think at one stage, Jacor had two or three legal firms working on it. The premise was that it was an “01 visa.” I don’t know if it’s different these days, but back then, an 01 visa meant that you basically had to prove that there was nobody living in the United States that could do your job better than you, which is a ridiculous concept. After arriving in LA and working for a few months there, we found ourselves in between a temporary visa and waiting for a permanent visa, so we had to vacate the premises, as it were. We had to get out of the country for a while. So the only thing I could work out in a hurry to keep the work for KIIS happening was for my wife and I to come back down to Sydney and do a deal with the radio station that I used to work at that would allow me to use their production studios overnight. So, when their guys finished at 9:00 or whatever it was at night, I would move in with my Pro Tools kit and Zephyr that I had shipped back down, and I would start making promos and doing the imaging for KIIS through the night. I would finish at about 8:00 or 9:00 in the morning, and their production guys from Triple M would come in and start their day.

This was supposed to be just for a couple of weeks. Five months later, I was still down here working overnights, making promos at 3:00 in the morning, which is not the best time to be making a promo. After about five months of that — and we’d been in LA initially before that for about six months — we shipped everything back to Los Angeles, but still couldn’t get our furniture or belongings or anything into America, waiting for Social Security numbers and for legal documents. We were told that if we shipped any furniture to America before that paperwork was ready, then they had the option of simply burning our stuff when it arrived, basically.

It ended up that my wife and I lived out of one suitcase for somewhere between 12 and 18 months, getting from London to LA, then LA to Sydney, and then back again. So it really wasn’t a great way to start working at a radio station, to be honest. We’d gone through a hell of a lot in a short amount of time, and it definitely made life tough.

It wasn’t the best plan, but funnily enough, it really helped develop what was going to be my style or take on the KIIS sound, because when I first got to LA, everything was very different. I’d been to LA before and was in awe of Hollywood and all of the big LA radio stations and everything, but the radio station was different — equipment, people, just the way they did things. But it only took a couple of weeks to get things going back in the studio in Sydney, the same studio I had previously worked in for eight years. That allowed me to kind of take out some of the unknowns. I was very familiar with the studio, so it meant that I could concentrate just on how these promos were going to sound, what was going to be the next sound for KIIS. And I still remember the night – or the morning at 3:00 or 4:00, just experimenting with different sounds and stuff like that. Then at one point, I just kind of hit on it and all of the sudden had this realization or picture of what I could do and what the sound could be. So in the end, being back in that old studio really helped me.

July 01, 2005 9381
by Steve Cunningham From the northwest of Russia, about 800 miles due east of Moscow, sits the Republic of Komi, home to Aleksey Vaneev and his Voxengo Pro Audio Software company. I’ve noticed that the Voxengo line of plug-ins...
Read More...
© 1988 - 2022 Radio And Production, LLC
Go to Top