Did you hear the one about the client who asked for the formula for great Creative? Except he wasn’t kidding. And I bit through my tongue to keep from responding...

Of course, if he jumped on my back and rode me long enough, I would have to admit that a formula does exist... several do, in fact. Will any or all of them lead to great Creative? It depends on who’s on the bench.

Before I explain that frustration, let’s get this guy off my back and look at 3 of the formulas that I seem to go to the most when putting together Creative. They are in no order of importance or possible effectiveness, they are simply directions my own work seems to go.

The Advertiser as Superman — The potential customer has a problem. Their car is a piece of crap, their dog keeps digging under the fence and escaping the yard, the one tooth left in their head isn’t as white and bright as they’d like. What do they do... where do they go? TA DAH!!! The mild mannered Advertiser slips into a phone booth and becomes THE ANSWER! Like magic, the customer has a brand new car at a price they can afford, the dog is jolted into submission with a new electric invisible fence, and their last real tooth is as blindingly white as the brand new phony set that was painlessly installed.

Problem... solution. A simple formula that offers the flexibility to set-up all sorts of Creative situations, from the serious to the absurd.

The Advertiser’s Laundry List — Here’s who we are. Here is a list of products. Here are the prices. You can get these products at those prices till Sunday.

The Introspective Advertiser — We sell... therefore we are.

This formula is all about image. The biggest, the cheapest, the newest, the most established, the friendliest, the hardest-working. This formula centers on the Advertiser as the product, rather than the products they offer. From a Creative perspective, it’s both freeing and limiting. The Creative can go in a million directions... as long as those directions lead to the exact image the Advertiser wants to portray.

There are others, and often some combination of the three come into play, but for the most part those are the three basic formulas for Creative that I use the most. So how do I choose which to use for each project? How do I know which will assure great, effective Creative for a given client? Here’s where the frustration comes in. I rarely have a choice. As I mentioned before, it’s all up to the judge.

And who is this Advertising Genius who will stand in judgment of the formula, the direction the Creative will go? Often, it’s the person with the most to lose, the one who came to you for your expertise in the first place. And yet that person judges what direction is best, not because they’re right. Because they can.

Despite how it sounds, I’m not about to bite the hand that feeds me. I don’t care what position a person has, they can never forget that it’s the client’s nickel that keeps the doors open, the lights on, and the occasional really cool new piece of gear to appear in the production room. We get to Create because someone pays us to… anything else is just a hobby. Does this mean that the client should call the shots? Looking reality straight in the eye, yes. Should we roll over and take it? Only if that’s how you do business.

At one of my first brainstorming meetings as a young Production Director, I found myself defending a perfectly reasonable and effective piece of Creative. The Rep was in a panic because, despite the fact that the commercial had increased sales for the business, the Owner didn’t get the joke I had based it on. I don’t remember specifics; knowing me, it was probably pretty lame, but the fact was that it was getting people’s attention and drawing them to the store. And now, because the Owner questioned it, we were discussing dumping it for something else. Around the table the discussion went… everyone, the General Manager, the Sales Manager, the Program Director, even the Rep, agreed that it was a decent spot. We all also agreed that, given the success, it was the right piece of advertising for the client. Still, the Rep was adamant about making a change. “Look,” he said, “The right thing might not be right for him… or for us.” I really needed him to explain that one to me. “Well, is it worth the risk of losing his contract, just to try to win this? I think that, even if we can only hold on to him a bit longer by changing it, we should.”

I just looked at him, waiting for a laugh, a punch line… something. He had just advocated stealing, and seemed justified in doing so. Yes, stealing… taking someone’s money, promising a service, and not providing it. Because if he really, REALLY wanted to provide the guy with great advertising, he’d stick to what we had created, and do whatever he could to make the client understand why he needed to continue using it. It really shouldn’t have been that tough to explain… we played the spot, he got a 30% bump in sales, end of discussion.

I don’t remember if we ended up changing the commercial or not, but I do remember that our General Manager “reminded” the Rep that we didn’t do business that way. Nobody should, unless all they want is short term growth. Yes, it’s the client’s money, but if your station is serious about giving him a return on that investment, you really must create what’s best for him and his business, and Sales should sell a package that will put that great Creative in the ears of prospective customers. People will start coming through the advertiser’s door, trust will be built, a long-term advertising relationship can begin. When it gets down to it, I must admit that might be my favorite formula for great Creative… so get off my back! 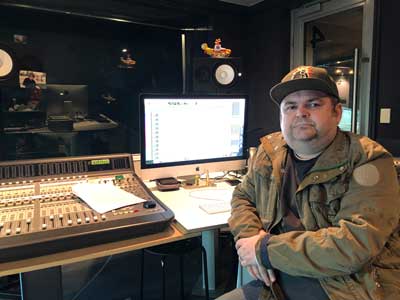 August 23, 2018 1897
Chris’s job title recently caught my eye: “Digital Radio Production Director” -- the first one I had heard of. It was no surprise to discover the company who gave this much attention to its digital stations was Southern Cross...
Read More...
© 1988 - 2022 Radio And Production, LLC
Go to Top