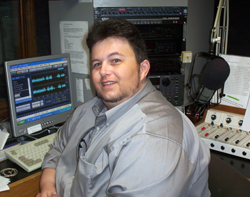 Stewart Byars made RAP Awards history by being the first person to tie himself for the 1st Place trophy in a category. In his case, he took home two trophies for Best Small Market Promo. (He also walked off with 1st Runner-up and Finalist awards in the same category!) No question… we had to check this guy out. And a pleasant visit it was. We’ve stopped at small market radio many times before in these pages, but Martin, Tennessee might be one of the smallest markets on the tour. Total population? Around 12,000... maybe. Thunderbolt Broadcasting has three stations in this market where numerous stations penetrate the airwaves from other towns and cities miles away. Stewart is their Production Director. In this month’s RAP Interview, Stewart tells us the creative stories behind his award winning promos, gives us a glimpse of small market radio that’s fun, and shares some of the reasons why small market can be a “destination” for some rather than a stepping stone or training ground.

JV: Tell us about your beginnings in radio.
Stewart: Actually, I wanted to be in radio ever since I was a little kid. As long as I can remember I always wanted to be in radio, but I was twenty-six before I actually got into the business. My best friend, Owen, got me a part-time job at a small, rundown radio station in Dyersburg, Tennessee that doesn’t even exist anymore. I started there doing weekend nights and have been in the business ever since. It’s been nineteen years now.

JV: Were there many stops along the way between Dyersburg and Martin?
Stewart: I went from Dyersburg to Trenton, and then from Trenton to Union City. I stayed in Union City for about nine years. Then eleven years ago I came over here, and I’ve been in Martin ever since. They were all small market stations right around this area where I’ve spent most of my life. I moved down here to Tennessee when I was eleven. I’m originally from Michigan.

JV: What positions were you holding at all these stations during this time?
Stewart: Well, at the first one it was just weekend nights, and in a matter of months I went to fulltime nights, and then I went to afternoons. From that station I went over to Trenton and worked nights, moved up to afternoons, and then went to mornings. I’ve been a morning man pretty much ever since. When I went to Union City, I started there nights, but I only worked there for a few weeks before they moved me straight to mornings, right after they got rid of their morning guy. I did a really fun radio show over there for about eight or nine years.

And you know, through all of those stations, I really did very little production. At the first couple of stations they told me that they didn’t think I had the stuff to do commercials. It was at the third station I went to, the one in Union City, where finally somebody let me get into production and learn how to do some of the basics. A fellow by the name of Scott Reeves kind of taught me the ropes years ago. When I came over here, we had a Production Manager already. I was hired to mornings on our country station — it was country at the time; it’s oldies now. So really I’ve been a morning man through most of my career. Then about six years ago they made me Production Director here, and I’ve been off and running since.

JV: Judging from your RAP Awards trophies, you handle the promos for the stations. Do your responsibilities also include knocking out commercials as well?
Stewart: Yes. I’d say probably about 80% of the commercials come through me. It may not be my voice on each of those, but I’m producing them.

JV: How many stations are you dealing with?
Stewart: As Production Director, I’m dealing with three stations: WCMT-AM/FM, and Oldies 95.1 WCDZ in Dresden.

JV: Do you have any assistants?
Stewart: No, this is a small market. I do a morning show here, and then I do production and remotes — you know, small market radio; you kind of have to learn how to do it all. However, some of the jocks also do production. Misty Menees does a lot of production here. She does it in the afternoon after I’ve gone. And Jordan Tinkle, who’s actually the boss’s son, he does some later at night. He’ll do a lot of the little programs and promos and stuff like that.

JV: But you’re cutting the majority of the spots and promos, and I’ll bet you’re cutting quite a few of them every day.
Stewart: Yeah, and you know, sometimes you don’t have time to be creative. And I think anybody in radio knows that. Your handed the script, and you do it as fast as you can; and luckily if you get a little free time, that’s when you try to throw in as much creativity as you can. And fortunately, with the promos, they don’t even hand me a script. They just tell me how much the amount is for the give-away that we’re doing that week and just let me do whatever I want. So it’s much easier for me to get creative on the promos.

JV: Well, congratulations on making Radio And Production Awards history with two first place entries in the same category. One was the BS “Bumper Sticker” promo, and the other was titled “Out of Ideas,” which was about a production guy who runs out of ideas for a promo. I was going to ask if you ever run out of ideas, and apparently you did on that one!
Stewart: Well, that was in fact kind of how I got the idea for that. I can’t count the number of days that I’ve got an hour left to go and the promo’s about to start, and I’m just sitting here thinking, where am I going to come up with the next idea? And usually I can’t even tell you where it comes from. Something will just pop in my head and I kind of work it out. I’ll put something on Cool Edit Pro and listen to it, and then I start editing. Then I kind of get more ideas from what I’ve started with. It’s kind of a patchwork way of doing it. A lot of it is in the editing. But with that one promo in particular, I didn’t have an idea, and I thought, boy I wish there was just somebody I could call. And that’s where the whole idea on that one came from.

December 01, 2005 12839
Yaman Coskun, Creative Director/Sales, Clear Channel, Washington, D.C./Baltimore By Jerry Vigil When you’re truly passionate about this business, it seems there’s no limit to what you can do. Yaman Coskun is a prime example....
Read More...
© 1988 - 2022 Radio And Production, LLC
Go to Top