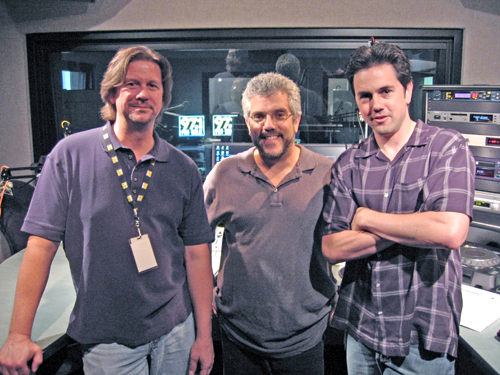 A few stations are lucky enough to have one amazing person in the production/creative department. Several names come to mind. You know who they are. But how many stations can claim a trio of super talents? And how often do you find three talents of this caliber all focusing their creative genius on just one radio station? It’s a recipe that’s working well for KLSX 97.1 FM Talk in Los Angeles. Don’t let their 15th ranked 12+ numbers fool you. They’re ranked amongst the top five billing stations in LA. They have been consistently ranked #1, 2 or 3 in the Infinity cluster for the past two years. Last year, the station billed 37 million. And they do it by relying 30-40% on local business. Rich Boerner, Ronn Lipkin, and Rob Frazier. Check your back issues for background on these gents. We interviewed Rob most recently in July of 2003. We visited with Rich ten years ago in March of 1995. And it was over twelve years ago when we checked in on Ronn in January 1993. The trio picked up RAP awards in all three categories this year, adding to an already overstuffed trophy case. It’s perhaps radio’s most powerful creative team, and this month we check it with the three R’s to find out a little more about what makes this team work so well at generating amazing amounts of direct sales revenue.

JV: Rich and Ronn, it’s been over ten years since we interviewed each of you. Ronn, you were at KLSX even back then, and Rich, you were at WTKS in Orlando. What are some highlights from the last ten years for each of you? Rich, how did you wind up at KLSX?
Rich: Well I left WTKS in May of ‘96 to go to San Francisco to put Alice@97.3 on the air. I went in as the Creative Director/APD and within a month was interim PD. The station was exciting, but a bit unstable. That’s when I started getting the calls from KLSX in LA. I loved San Francisco but Bob Moore basically said, “I want you in LA, what will it take to get you here?” I told him and he said, “You got it!” I started here in December of ’96.

KLSX was still struggling at the time, and with APD and weekend music responsibilities, I wanted to make sure that Ronn Lipkin, who had been there 5 years already, was not paranoid about me coming in. So I got KLSX to buy a new Pro Tools system for him. Kinda my way of saying, “you’re an important part of what we’re going to do here.”

Ronn: The biggest highlights were the birth of my kids. Ian was born in ’96, Troy in ’98. As far as radio goes, moving to our new studios earlier this year was big, almost like getting a new job where you know everybody but the equipment’s brand new. Let’s see, other highlights would be the Moody Blues at the Whisky in ’93, some of the Stern broadcasts, watching Brian Wilson’s band rehearse... it all reminds me that working in radio offers unique, exciting opportunities.

JV: What are your titles and responsibilities?
Rich: I am the Creative Director/APD and leader of the pack. Ronn is Production Director and Rob is Commercial Production Manager. But honestly, I consider the three of us equals creatively. I just happen to have a few more managerial responsibilities.

Rob: As the Commercial Production Manager, I’m mostly responsible for writing, voicing and producing commercials. There is some promo work.

Ronn: As Production Director, along with Rich and Rob, I get to turn electricity and words into cash.

JV: Rich, how did the in-house agency thing come to be? Is it handled as a separate business within the station?
Rich: The agency deal happened in ’99 in the middle of the dot-com explosion. We were probably pushing 45% local business back then, and our GM Bob Moore allowed me to take control of the entire department and expand it by, for one, giving us three full time production people. We started running weekly creative meetings for clients and super-serving our customers. The positive billing results followed.

We don’t run the department as a separate agency; it’s part of what you get when you buy KLSX. It’s a  very powerful sales tool for our AEs.

April 01, 2002 9504
by Steve Cunningham Throughout the many years I’ve recorded audio in the field, I have to say that I’ve never been completely happy with portable recorders. I’ve still got an expensive portable cassette recorder that I use for...
Read More...
© 1988 - 2022 Radio And Production, LLC
Go to Top