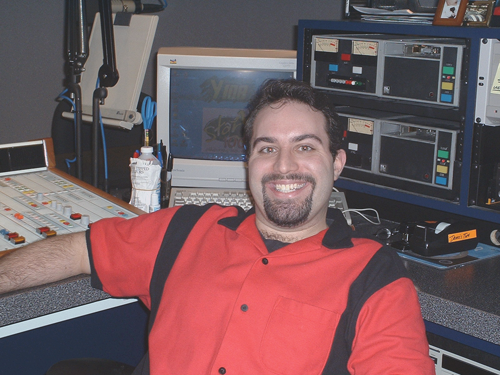 How do you image a HOT AC station whose target is a 35-year old mother of two? You get a 26-year old single guy with no kids. Well… not just any 26-year old single guy. You get Drake Donovan. WZPT is Pittsburgh’s HOT AC station, one of four stations in the Infinity cluster in the country’s #23 ranked market. Drake handles the imaging for WZPT as well as sister station Y108, and Drake recently launched his own creative services company. A listen to WZPT or to Drake’s demo on this month’s RAP CD illustrates why Drake was the winner of the recent 2004 Pittsburgh AIR Award for Best Creative Services Director. This month’s RAP Interview picks Donovan’s brain for some of his HOT AC imaging tricks, and  we get a glimpse at imaging where keeping it entertaining, local, and fresh still counts.

JV: How did you get your start in radio, and how did you wind up where you are?
Drake: I’m actually working at the company that I interned for ten years ago. I was at school at Penn State and went to the Pittsburgh radio organization job fair. I was standing in line to talk to my favorite radio station in town. I started talking to the Promotions Director, telling her all about myself. She said, “So, you’re going to be a senior?” I said, “No, I’m a sophomore, going to be a junior.” Right there the lady starts scratching out my name. “Come see us next year.” So I went and disappointedly stood in the line for the Top 40 station, which I was not too excited about because that was the chick’s station — the girls all liked that one. I didn’t want to be a part of that. But the Promotions Director there was all excited. She was like, “Get your resume in. We’re hiring in January.” So I was excited then.

I ended up getting an interview and getting an internship with the former B94, which led to two summers of internship. I was able to make an aircheck in the studio there, and that got me a job in State College, where I went to school at Penn State, at a 5000-watt modern rocker. The PD happened to be from the Pittsburgh area and saw B94 on my resume. He hired me on the spot. He listened to my tape after the fact and said, “Oh yeah, your tape is pretty good too.” So that was my foray into the business, my first job. I was on the air on the weekends in State College at this Alternative station. This was about 1995 or ‘96 so it was right at that peak of the Alternative boom. I worked my way up from part-time weekend guy, and since I had experience in the Pittsburgh market, I did promotions and a little bit of production. I started working my way up the ranks and the hats started piling on — Production Director, Promotions Director, Assistant Program Director, Music Director. Finally I worked my way up to the PD slot.

From there I got a tip from a record rep that they were looking for jocks out in Wheeling at WOMP-FM. I ended up getting the afternoon drive job out there. And right about the same time, David Edgar, who was the PD at the time at B94, gave me a call and asked for a tape of what I had been doing in State College. I sent him a tape and he found a space for me doing weekend overnights. So I was on the air in Pittsburgh, and I was on the air in Wheeling. The signals just barely crossed, and I was able to get permission to work at both stations at the same time. That was crazy. I was working seven days a week because I would do afternoon drive and production in Wheeling Monday through Friday, and then crash on the boss’ couch in Wheeling. Then I’d get up, drive back to Pittsburgh at around 10:00 to 11:00 at night and do the midnight to six show Friday night on B94. Then I’d go back to Wheeling on Saturday morning to do ten to two and then go back home. Then it was back to Pittsburgh to do midnight to five, and then I’d sleep all day Sunday.

So after doing that for a while I kind of got sick of it and a traffic position opened up in Pittsburgh. The traffic reporter for B94 and our sister station, WZPT — which is who I now work for — left after years of being on the air. So they ended up getting me in at Metro Traffic, and I was doing the traffic for a bunch of stations in town and still working part-time at B94. But working two jobs, two paychecks, split shifts… it was wearing on me. I went to our Vice President of Programming and I said, “I really appreciate all the opportunities. You’ve really helped me out, but my goal within the next twelve months is to be full-time in this building.” And he said, “Well, everybody at B94 is pretty stable, not going anywhere, but we have a night position open on our sister station, WZPT. But it involves some imaging stuff too.” I told him I was Imaging Director at WOMP, got him a tape, and got the gig doing nights and imaging for what was then the Point. A few months later it flipped to hot AC as Star 100.7. So I’ve been with Star since the beginning. This station is my baby. I helped sign it on, so I’m very, very protective of it and very proud of what we’ve been able to do over the last four or five years.

JV: What are your responsibilities now?
Drake: I’m still imaging Star 100.7, and recently our Production and Creative Services Director left WDSY, which is our Country station, Y108. They basically took his job and split it up and gave the commercial stuff to our Commercial Production Director and gave me the imaging stuff. So I’m Creative Services Director for both WZPT and WDSY. Our other two stations, KDKA and WRKZ are separate from us.

JV: After having held several positions in radio, how did you decide that production was where you wanted to be?
Drake: I always thought I would be making the move into the production studio and off the air at some point in my career. I got into radio right around the communications act of 1996. So I was watching all these stations get gobbled up by all these big conglomerates, and more and more people on the air were losing their jobs. I got to thinking, on-air talent may not always have a job, but there is always going to be content; and I thought if I could make myself good at creating the content, then no matter what comes our way, whether it’s satellite or cable television, whatever the medium is, they are always going to need good creative content, and if I can make a niche there, I will.

At the time that I made the move into the production studio I had been doing mornings. We had a syndicated show on STAR 100.7, and the plan was to put a live local morning show on 100.7. When we did that, the APD at the time moved up to the morning show slot and requested that I come and produce his show, and since I did traffic he also had me doing the traffic reports as well as imaging the show. So I gave up nights and imaging and moved to mornings. The guy that replaced me at nights was then doing the imaging, and I guess he was really new at it. He couldn’t keep up with the demand. The station was changing. We moved the APD afternoon drive guy to mornings, we got a new APD afternoon drive guy, and we moved the night guy up to mornings, so we needed a new night guy. Everything was in flux including the identity of the radio station. I think we were “‘80s and more” at the time and then we became “‘80s, ‘90s and today.” So things were changing. The guy couldn’t really keep up, so they were constantly asking, “Drake, can you help out? Could you help tweak this promo?” So my days instead of being five to one, were more like five to five. I lived about a half hour to forty five minutes away from the station. Everyday I’m doing the sleep dip on the ride home, so I’d go to the APD and say, “Can you find somebody? Have you found somebody?” And finally on a Friday afternoon they said, “Yeah, we found somebody. Go to the boss’ office.” So I walked in to talk to Keith Clark and he’s like, “You know, we have searched high and low to find another Drake and we can’t find him. You’re it. We need you in imaging.” I was kind of crushed. Here I was, doing mornings in my hometown. My family could listen to me everyday. I was having the time of life working with a great team, and I was just absolutely crushed. And then JR, the APD, said something to me. He said, “You know buddy, don’t take this hard. This is a step up for you. You can make your personality shine through a piece of production so much better than anybody could do it on the air.” I had never thought about it that way before. That was a Friday afternoon, and Monday morning I came in to start doing imaging, and about a week later I was thinking I would never go back to mornings. That production room was where I was meant to be. Always.