Individually, the Morph module is similar in concept to a vocoder in that one signal is being modified based on what another signal is doing. If you are applying Spectron to a track and want the file to be morphed by a sound effect (for instance), there is a box in the Morph screen to load in that “target” file. Morph will then make your original file follow the target — if the target is –10dB at 100Hz at a particular point in time, so will your original file, but it does so over many frequency bands in real time! It has controls for input threshold (at what level below Spectron will ignore your file) as well as target threshold. 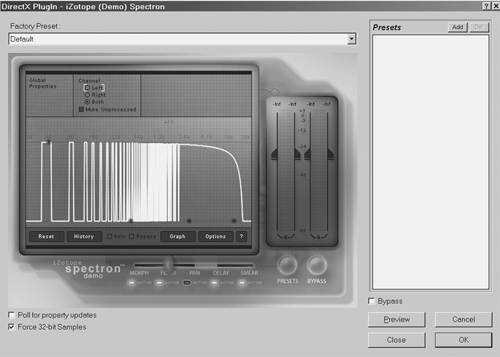 Filter is much like a typical EQ, except that it goes beyond what you’d expect. If you are used to DAW EQ where you can draw in your EQ curve, you’re set to start with Filter. The difference is you’re not limited to curves. You can draw in whatever shape your heart desires with squares, triangles, or sharp, SHARP notches. You can boost harmonics, or leave only the harmonics as well. 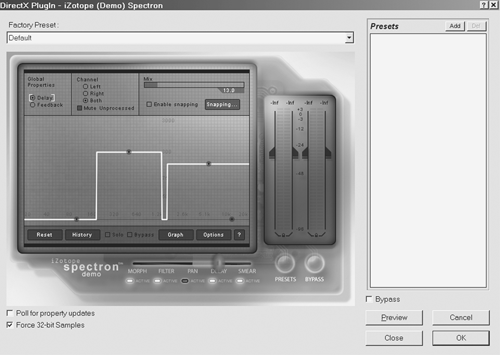 Normally Pan wouldn’t be that exciting. Left, right, or somewhere in between would usually cover it right? In Spectron pan becomes much more fun as some high frequency bands could go one way, lows another, with mids just staying put or swapping back and forth as well. The individual bands are panable, meaning your sounds can be Grand Canyon wide. Delay is as you would expect, with control over mix, feedback, and delay time. Maximum delay is 3000ms, but again this is per frequency band. Delay time and feedback are on separate graphic pages within the Delay module. If that’s not enough to play with, there is a mix control for the amount of delay, and a snapping control to snap delays to tempo for those rhythmically obsessed.

All the mentioned modules work spectrally. There is a large frequency display that takes up most of the interface. Frequency goes left to right, naturally, with module specific controls going vertically. Those familiar with Cool Edit will know the FFT filter screen. It’s a lot like that in concept. A control line is present, and you grab and manipulate that control line as you see fit using break points or nodes. There are controls on the nodes which control curving, width and height. Very clever in its ease of use. 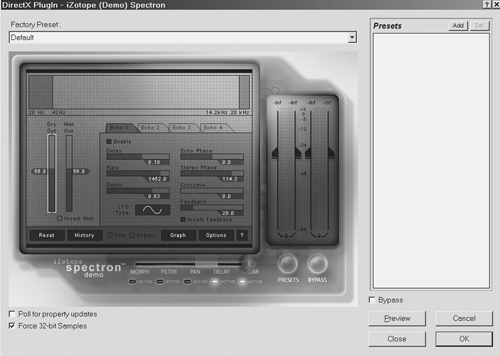 Smear is the only module that works non-spectrally. Smear is a 4-stage analog modulated delay and includes the overall wet/dry mix control. Another way to think of this is the biggest chorus box you’ve ever seen. You can invert the phase on the wet control, and low and high pass filter the original signal (without affecting the wet processed signal) for further creative options. Controls are delay (up to 10ms), phase of the echo and the stereo signal, crossover (which is a stereo widening control), rate, depth, and LFO shape, and a feedback control.