I’m a big fan of clever. Clever word play, clever construction, clever design — sometimes it’s not the big splashy thing that impresses me most. That’s why I’m always curious to give a look when iZotope comes out with something new.

You probably know iZotope from their freeware plug-in Vinyl which emulates turntable noise, which may be the cleverest bit of software I’ve ever seen. You may know them from Ozone (see RAP January 2002), which is a really nice complete mastering plug-in. Ozone is a bit of a resource hog, but on a powerful enough processor it does exactly what they say it’s supposed to. If you follow what this clever little company from Boston does on a regular basis, you may know them from their two newest plug-ins: Trash, which does distortion and amp modeling, or the focus of this review, Spectron.

What is Spectron? It’s a DX plug-in, that does… well it’s tough to say exactly what it does. It does delays, but not in the way you’d expect them. It does filtering, but not the filtering you’re used to hearing. It pans and modulates, but does so in a much more complex fashion. It even morphs between sounds.

Spectron works by dividing the wave up into individual frequency bands through the audio spectrum. Big deal you say; Ozone does 5 bands. Cool Edit Pro/Adobe Audition will split any WAV into 5 bands, and other plug-ins will as well. Okay, that is all true, but how does up to 2048 frequency bands strike your creative fancy? 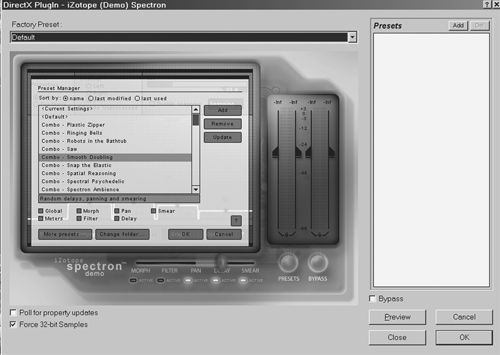 The interface for Spectron is quite large and will cover most of the screen. If you are working on 2 monitors of course you could move it to the second screen and still be able to see the file you are working on. If you don’t have dual video display, Spectron has a control that makes the plug-in as opaque as you like it. That is a clever compromise, but I found the opaqueness difficult to work with. You’d better like the color blue as well, because they’ve used a lot of blue on the interface.

Spectron itself has 5 modules: Morph, Filter, Pan, Delay, and Smear. There is a sliding knob along the bottom to switch between each module for tweaking, with a small Active indicator for each module. Available globally are gangable input and output level controls, an Options page (more on that in a bit), a Graph page which lets you position the Smear module in relation to the Spectron engine (which does the slicing and dicing) and the Spectrum block, a History page for referring back to previous sounds or tweaks, and a Reset button which changes the parameter value back to its default setting. There’s Help, the Preset list, and global bypass as well. All modules except Smear give you the option of processing individual channels of a stereo file, both channels, or muting frequencies outside of what is being processed within the module.

The Options page pops in opaque over the main Spectron page, which again I found hard to work with; but maybe I’m just getting old and my eyes are going. On this page are controls for the number of frequency bands, number of steps that will be shown on the History page, and numerous controls to help tame Spectron’s demands on your CPU. To conserve CPU power you can turn off meters and animation, lower the number of frequency bands, or use mono for previewing (still process in stereo though). Also a control to help you tune Spectron to the way your CPU and software handle the audio, by means of buffering and delays to help control stuttering and latency. If you find that Spectron is adding delay time and offsetting your audio, the CPU control is the key and you can change its setting to Mixdown, which adds no delay to the processing. I tested Spectron on a 2.4GHz/P4 computer with 1GB of RAM and didn’t have any problems with the default settings. Your mileage may vary, which is why those controls are there in the first place.