I’ll admit it right up front — this review is an exercise in personal selfishness for me. I’ve admired and lusted after Eventide products since the ‘70s, and I’ve even been known to hunt for old ones on eBay. So when I saw the Eventide Eclipse multi-effects processor at a show, I called our beloved Editor and begged, pleaded, coaxed, and cajoled him into having the shiny silver box sent to me for review. Well, it’s here, and it’s an Eventide. And that, dear reader, is a Very Good Thing as we’ll see.

Eventide has been making digital effects processors for longer than I’ve been in the biz, and that’s approaching thirty years. Most of you have probably run into an Eventide box at some point in your production career, especially the workhorse H949 Harmonizer. Some of you may even remember the 1745 DDL, introduced in 1970 when the company was known as Eventide Clock Works, and one of the first digital delay lines.

The Eclipse is Eventide’s latest addition to its processor family. This new machine is priced as an entry-level Eventide product, although at $2,995 it’s not inexpensive. On the other hand, it’s no slouch in the DSP department, with 10 times the DSP power of the still-selling H3000 series. While all previous Eventides have been two-space rack mount machines, the new Eclipse comes packaged in a new one space rack mount chassis. It features dual effects processing engines, allowing stereo and mono, and serial or parallel configurations. The analog audio converters feature selectable resolutions up to 24-bits and 96 kHz, and the Eclipse comes with most every flavor of digital I/O you could want.

The Eclipse’s user interface is clean and elegant. There’s a clear and simple fluorescent green LCD screen, four soft keys, a big parameter knob, a numeric keypad and a few function keys. It’s all intuitive and reasonably fast to operate. There are over 300 preset programs built in and 100 empty memory locations for storing your own programs, with a CompactFlash card slot for backing up your programs and setups. All the usual multi-effect suspects are available, including reverbs, multitap delays, phasers and flangers and, of course, Eventide’s trademark pitch-shifting algorithms.

THE INS AND OUTS

Check out the back panel of the Eclipse, where it’s evident that you can connect it to darn near anything. The two analog inputs are combo 1/4" and XLR connectors, with balanced +4dBu inputs on the XLRs and -10dBV unbalanced inputs on the quarter-inch jacks. There’s plenty of gain available in the input circuitry to accommodate even low-level inputs directly, if required. The analog outputs have separate XLR and quarter-inch connectors, both of which are electronically balanced, although plugging in an unbalanced jack plug will reduce the output level by 6 dB.

Digital I/O is through XLRs for AES/EBU signals, with RCAs for S/PDIF signals and Toslink optical for either S/PDIF stereo signals or ADAT lightpipe multitrack data. For the latter you’ll need to select two of the eight channels in the Setup menus. A pair of BNCs provide word clock in and out, and a nine-pin D-Sub connector enables an RS-232 serial link to be established with a personal computer to transfer data. The traditional trio of MIDI connectors is included on the rear panel, along with a remote power input connector. The MIDI In jack is a seven-pin version, which allows remote powering of MIDI pedal boards. There are also two 1/4" jacks for connecting to foot switches, foot pedals, or control voltages (0-5V) that can be used to modulate parameters or to trigger events and program loads. Finally, the ubiquitous IEC socket accommodates AC power between 100 and 240V. 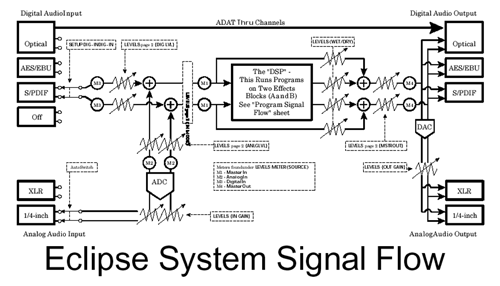