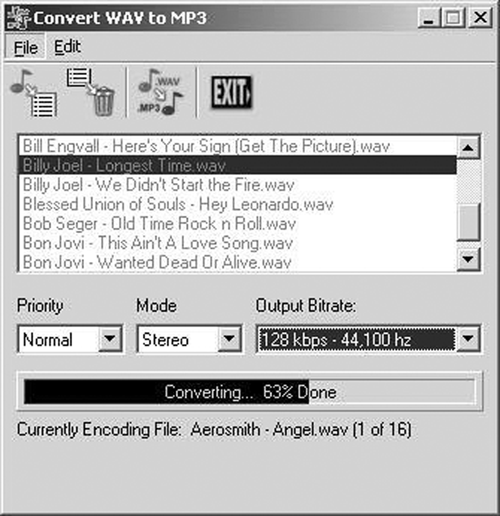 AudioEdit Deluxe comes with a good selection of effects, and most of them are good. Invert shifts the audio’s phase by 180 degrees, while Reverse, well, reverses it. Amplify (Increase) adds 3 dB, while Amplify (Decrease) subtracts the same amount.

There are respectable Fade In and Fade Out commands, but alas there is no facility for cross-fading in any way. Nor is the shape of a fade programmable, but the linear fade provided works well enough. The Normalize function seems designed for neophytes, since it doesn’t let peaks get within 3 dB of full scale and the digital distortion that goes with it. AudioEdit Deluxe gives you Time Stretch, but in reality it is simple varispeed, and you can’t change the length of an audio segment without also changing its pitch.

The special effects include Flanging, Delay, and Vibrato, although the latter should properly be called Tremolo since it is amplitude modulation, and not frequency modulation.

Unfortunately, the filters leave much to be desired. AudioEdit Deluxe provides filters of several types, including Low Pass, High Pass, Low Shelf, High Shelf, Bandpass, Notch, and something called FFT (Fast Fourier Transform), which despite its fancy label sounds like a notch filter. Unfortunately, all of them suffer from lousy parameter labeling. Instead of the usual Frequency, Gain, and perhaps Q or Width labels, calibrated in dB and Hz, AudioEdit Deluxe uses terms like Frequency, Steepness, and “Grain (db)”. The Frequency parameters seem to work right, although the default value for all filters is 100 (this seems to be Hz). Is “Grain” really Gain? Is Steepness what we call Slope and measure in dB/octave? I don’t know and couldn’t tell. What I could tell was that using values that varied greatly from the defaults gave results that were unusable and full of strange noise. Best use the EQ on your console instead. Note: Mystic Media says that the filter parameter values will be overhauled in a future release. 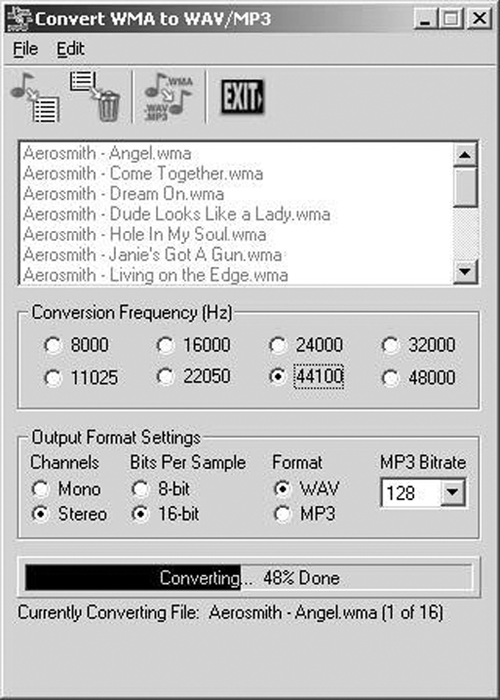 AudioEdit Deluxe appears to be aimed in part at the MP3-collecting crowd, judging by the number of file formats and conversions it supports. These include WAV, compressed WAV, MP3, OGG (a flavor of MP3 that uses a different codec), Windows Media, RAW, and VOX. The program includes converters to translate audio between any of these formats, and the results I got were exactly the results I expected. It works just fine.

In some areas, yes, while in others, no. For basic recording and editing, AudioEdit Deluxe worked as advertised. It’s certainly affordable, and it didn’t crash or hiccup once during the time I used it. But there are some problems, notably the lack of a manual of any kind. The program comes with a Help file, but unfortunately this document provides more of a glossary than any substantial help for specific operations. Somebody at Mystik Media needs to take the time to write a real operation manual.

Basic editing is competent, but navigating to different parts of a long recording is cumbersome. And the filters are nearly impossible to use. For the “A” room, I’d save up another 30 dollars and spring for Cool Edit 2000, on which much of AudioEdit Deluxe seems to be modelled.

But AudioEdit Deluxe qualifies as a product that was probably developed by a couple of manic programmers, and I suspect that most of the deficiencies in the current product will be addressed in some future release. Because that’s what manic shareware programmers do — they release new versions.

AudioEdit Deluxe is priced at $40 USD, and a 15-day trial version is available at www.audioedit.mystik media.com. For more information, visit that address or send email to .

August 01, 2007 9488
by Steve Cunningham I’m a fan of physical controllers for software audio editors. I like pressing a button to drop into record, and adjusting a fader or knob to tweak the audio. I still prefer a mouse for selecting a region to...
Read More...
© 1988 - 2022 Radio And Production, LLC
Go to Top