I like shareware software in general, and not because it’s inexpensive (although it usually is). No, I like it because it’s often the product of one or two manic programmers who, because they couldn’t find a program that did precisely what they wanted done, wrote one just for themselves. Most of the time the software does its intended job well, and uses far less resources than would a commercial software package with a million features that I don’t necessarily need.

Certainly shareware tends to be cheaper than commercial software — it’s not burdened with extra costs for fancy packaging and marketing, not to mention a generous cut for the publisher or distributor. I can tell you from personal experience that “buying an end cap in CompUSA,” in which you pay a retailer to display your product on the end of a store aisle, is an expensive proposition.

Shareware’s main attraction for me is its simplicity, and the dedication of the author to continue developing and updating it over time. On the other hand, sometimes shareware products show off the developer’s lack of experience with the job they’re trying to perform, and they leave out features that a pro would consider necessities.

Nevertheless, when I find a shareware product that does something useful for me, I’m a happy guy. I get to buy something that not only makes my job easier, but I also get to support a fellow small-businessperson. And that businessperson is more than likely grateful for my support, and shows it by sending me updates regularly. It’s a good deal all around.

With that in mind, this month we’ll look at a product that does a specific job well, comes without fancy packaging, and in fact is available only through the Internet. It’s also inexpensive — that doesn’t hurt.

Mystik Media’s AudioEdit Deluxe is a two-track editor that is compatible with a long list of file types. Its feature set is modest but complete, and it comes with a $40 price tag and a free 15-day trial.

The program’s requirements are also modest. AudioEdit Deluxe needs a minimum 200MHz Pentium-class processor with 128MB of RAM and 30MB of hard disk, which makes it a fine candidate for a “B room” with an older PC. Even while editing a 10 minute stereo file, AudioEdit Deluxe never consumed more than about 6% of System and User resources and 9% of GDI resources on my PC, according to Windows’ Resource Meter. It runs under all flavors of Windows, including 95, 98, NT, 2000, ME, and even XP. The current version at this writing is 1.4, released at the end of last December.

Installing AudioEdit Deluxe is a straightforward process. The installer is the typical Wise for Windows program that creates backup copies of any of your Windows files that are replaced during installation. This makes for a thorough uninstall process (should you ever choose to do that) by returning your entire system to its original state. This represents more than a nice touch, and it’s reassuring to a Windows neophyte like me. 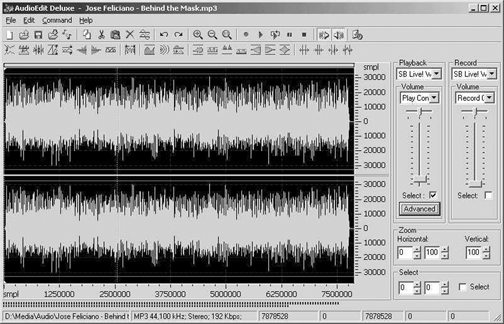 AudioEdit Deluxe presents itself in a straightforward single window. The waveform occupies most of the main window. The horizontal axis is calibrated in either samples or milliseconds, and the vertical axis is likewise calibrated in either samples or percent of full scale, which the program calls “normal.” I’m still not sure how you calibrate amplitude in terms of samples, since amplitude is measured in dB in the analog world and in bits in the digital world, but not in samples. I don’t get it in CoolEdit either, but there it is. I just chose to use the “normal” scale and that worked out just fine.

You can set a preference to display a grid in the waveform window against both time and amplitude, which I found useful. A scroll bar along the top of the waveform display gives you a “thumb” to drag when you’re zoomed in, although the scroll bar should be larger and should have arrows on either end to let you scroll incrementally.

On the right side of the window, you’ll find faders governing the record and playback levels. Note that AudioEdit Deluxe appears to use Windows’ sound drivers to access your sound card, so the range of parameters that can be controlled with those faders depends entirely on the capabilities of your card. It also means that if you have a fancy sound card with its own drivers, you’ll have to enable that card in Windows’ Sounds control panel in order for AudioEdit Deluxe to recognize it.

Below the faders you’ll find editable numeric readouts for horizontal and vertical zoom, and for specifying the start and end times of a selection. Under the timeline at the bottom are the meters, which consist of two thin lines of square dots. Unfortunately, they are uniformly black (or dark gray on my monitor), and there’s no calibrating marks or color indication for peaking or clipping.

Along the top of the window are two rows of icon buttons that access navigation features and the editing functions. For those icons whose function is less than obvious, you can hold the mouse over the button and its function will appear in a text box.

Almost all AudioEdit Deluxe’s functions, including effects processors, have keyboard equivalents. The software makes good use of the F-keys, and I would imagine you could work quickly once you’d memorized the equivalents. Many of the key equivalents are the same as those in CoolEdit, so you don’t have to start from scratch.