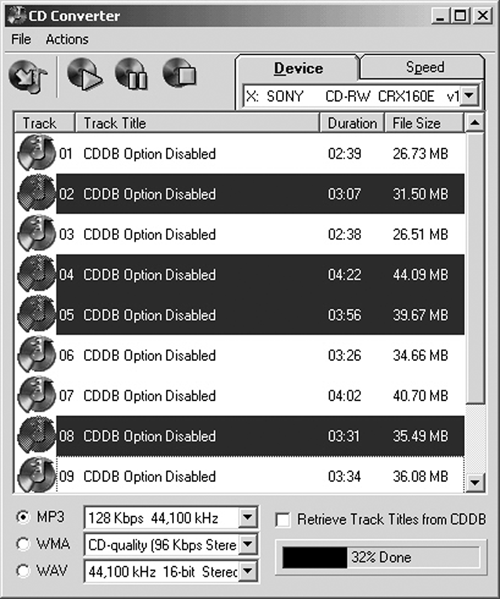 AudioEdit Deluxe supports mono or stereo recording at sample rates between 8kHz and 48kHz. Digital audio can be stored at either 8 or 16 bits. Okay, there’s no 24-bit option here, but whaddaya want for 40 bucks? Once you’ve selected the proper parameters for your sound card in the Record section, you’re ready to go. In the Preferences you can enable a Record Timer that will stop the recording process at a time measured in seconds, or you can simply let ‘er rip.

Editing in AudioEdit Deluxe is straightforward. You can click and drag to select a region for editing, and right-click anywhere outside the region to extend it. You can edit either the Left or Right channels individually or both at once, depending on where you click in the waveform. AudioEdit Deluxe supports the customary Cut, Copy, and Paste commands, and adds some different ones. You can Paste From File, which will insert an existing audio file at the current cursor, without deleting existing material. The program doesn’t appear to add crossfades to the inserted material, but I used this feature several times and noticed no clicks in the result.

You can also Mix From File, which mixes the contents of another audio file with the existing audio. A dialog box lets you select the relative volume level of each as they’re mixed, and it defaults to 50 units

(percent, I assume) for both the selection and the paste (which seems to mean the new file and the existing file). You can also Insert Silence of a particular time. There’s a Delete Silence command as well, but there are no options to set the detect level, and invoking this command simply seemed to just delete the entire section. Mystic Media says that although this command works for its original specialized purpose, it doesn’t work as you’d expect for most applications, and they will remove the Delete Silence command altogether from the next release.

None of these edits seem to occur in real time — when you execute an edit, the meters become a progress bar that shows the time left to process — but they were all snappy enough on my 500MHz Pentium III PC, and the small delay didn’t bother me. Undos are essentially unlimited, provided you don’t save your work to disk.

The weakness of the navigation features, particularly the zoom functions (or lack thereof), were evident during editing. Playback always starts from the cursor, which appears wherever you click in the wave display. But there is no easy way to play from the beginning (ignoring the cursor) or to send the cursor back to the beginning of the file. You can change the Selection Start time to zero to accomplish this, but I was hoping for a one-key solution.

Zooming for tight editing is also not as easy as it should be. There are three zoom buttons: Zoom In, Zoom Out, and Zoom Full. But unless you’ve selected some of the audio, these buttons don’t do anything. Once you’ve selected some audio, the Zoom In button then makes the selection fill the display and the Zoom Out button takes you back. Zoom Full always shows you the entire file at once.

Having said all that, I was able to record and edit several voice tracks as quickly using AudioEdit Deluxe as I can with say, CoolEdit 2000. For quick tracking and normal cuts, AudioEdit Deluxe worked out just fine.

November 01, 2004 9256
by Steve Cunningham Plug-ins, those little add-on software modules that extend the capability of a digital audio editor, are some of the most useful and innovative devices ever developed. Modern plug-ins often duplicate actual...
Read More...
© 1988 - 2022 Radio And Production, LLC
Go to Top