For my use, the Multi-band Dynamics module is the heart of this program. It’s 4-band, with each band having its own separate compressor, limiter, and expander, and each of those having control of threshold, ratio, and attack and release times. Crossover points are of course user selectable. To see what you are doing requires you to click on a band. That brings up the threshold and ratio controls for that band (the attack and release times are a separate click away). A graph for your compression curves is available to visually check what you are doing. I still haven’t grasped the concept of the visual compression curve, and I found this to be distracting. Also available is a “Level Histogram” graph. As iZotope describes it, it’s a “level meter with a memory.” It shows where there is a lot of level in your file, and shows how the compression you’re applying is affecting the overall track and goes hand in hand with the dynamics curve. 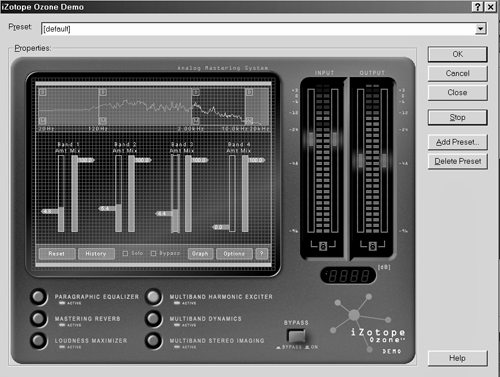 The Multi-band Stereo Imager is similar to the button on your ghetto blaster that makes it sound “3-D.” The module is again 4 bands, with crossover points user selectable. You can individually select how wide each band will be, and each band can be individually delayed. You can also gang all the delay times, although doing so defeats the purpose of the delay. Vector and phase metering is provided. Used judiciously, this effect is really neat and makes things sit up to take notice. It’s equally easy to overdo it though, so go carefully.

The always-available controls are the global bypass and the input and output level controls with peak indicator. The level controls are selectable for ganged or individual adjustment. Also, when you adjust a level, a numeric display activates telling you exactly how much you are changing. The numeric display has a small peak indicator as well. There is a selector area that lets you bounce between the displays for all the different modules. Under the name of the module is the active indicator for that module that doubles as a second bypass switch for that module.

Enough of what you get to play with, how does it sound you ask? It sounds impressive, and very clean. In comparing it to other multi-band processors I’ve used, it makes the Dave Brown multi-band limiter sound horrid. It can easily sound as good as the Waves C4, and with the other modules that are not included in that processor, Ozone can sound much better. Comparing it to something like T-Racks is close as it can be set up in a similar manner, but Ozone is smoother and cleaner.

The problem I have with this processor is that you can do SO much, it’s really easy to get in over your head and be completely lost, which is frustrating. You really have to start one module at a time, gradually building up additional modules as needed. One of the reasons I like the Waves C4, is that once I’ve set my ratio and threshold controls, I don’t really have to touch them again for weeks. I can fine-tune the sound by playing with the crossover points or the knee at the threshold point. I’m not there yet with Ozone, and it’s more complicated by having more options available with the other modules.

Ozone is also a power hog. The computer I used to test was a Pentium II, 350 MHz, with 128 MB of RAM running Cool Edit Pro. Not the most powerful computer on the world I will admit, but it has run everything I’ve ever thrown at it, until now. The computer would not run Ozone cleanly to preview any file with more than a single module selected. Multi-band modules run by themselves would not preview cleanly (though with practice the preview was usable in Multi-band), while other simpler modules (Reverb, Loudness Maximizer) would. By cleanly, I mean that there would be stuttering and pausing that is random enough to drive you mental. There would be a pause of about a second when altering controls before the control would change. Now, you can highlight the value and override it by typing in the value you want, but I find it easier to grab a control with the mouse and move it. Ozone would process the file cleanly and undo it cleanly, but it would not preview. Any of the presets that had multiple modules active would not preview. Note that Cool Edit Pro does not support real time effects, but generally supports real time preview of effect. How Ozone would work in a program that does support real time effects is a question that I cannot answer. For a lark, I tried Ozone on an even less powerful computer and got the expected results of even worse preview possibilities, although it was still able to process the file cleanly.

iZotope is obviously aware of this shortcoming. The Help section of Ozone is exceedingly well written and easy to use. There is a chapter in the Help section on how to optimize both Ozone and your computer to make things run smoother. Tips include turning off various levels of automation, turning off the meters and scopes, plus an easy to follow list of suggestions to make your entire system run more efficiently. I followed all the suggestions in the chapter and they did make a noticeable difference, just not enough of a difference to smooth things out. Users should note to not click on the typical Windows Help icon and go to the “?” icon within Ozone.

iZotope offers a free 54-page tutorial on Ozone. It goes into great detail on the art of mastering without overdosing on the science involved. It’s well worth a read even if you never use the plug-in. Get it on the Internet at www.izotope .com/products/ozone/ozoneguide.html.

Like most things in a modern radio production studio, there are a lot of tools that were not necessarily designed for radio production use—they’ve been adopted and adapted from the music industry. Ozone is certainly one of those. Who should be looking at Ozone? Well if you just want to grab a preset and move onto something else, Ozone is definitely NOT for you. There isn’t a wide selection of presets to begin with, and I didn’t find one that was applicable to what I wanted to do. You really have to go in and create something from scratch so Ozone can make your work sound better, and then save that as a preset. I wouldn’t use Ozone as my main plug-in for compression, EQ, or reverb. It’s something that is best used to sweeten a mix as the final step. That’s why it’s called a Mastering System. If you are willing to invest the time and learn about your craft, Ozone is a worthwhile addition to the toolbox, provided you have a platform that has enough power to run this plug in properly.

Ozone is available on the iZotope website (www.izotope.com) in both demo and retail form with a current price of $199 US. Compared to what you’d pay for Waves C4, this is an out and out bargain, plus you have more sonic possibilities with the additional modules. Installation was painless, just open the self-executing program, decide where you’re going to put it on the hard drive, and enter the required registration information when prompted for it. There is even a separate version as a plug in for Winamp if you want your MP3 files to sound better.

The review copy of Ozone was supplied directly from iZotope Software.

“The reason we use so much CPU is the 64-bit processing. It’s important to keep the rounding errors down in a range that is inaudible, but that does come at the price of twice as many calculations than a 32-bit plug-in. There is a relationship between sound quality and CPU in Ozone. We are recommending a PII 450 or higher. As an example, on a Celeron 600, Ozone uses 50-60% of the CPU when running real time previews in Sound Forge with all meters and modules running.”

September 01, 2008 7078
By Steve Cunningham I know I’ve mentioned this several times in previous months, but I’m still in search of alternatives to Waves’ plug-ins and their annual upgrade program fee (cleverly referred to as WUP, or Waves Update...
Read More...
© 1988 - 2022 Radio And Production, LLC
Go to Top