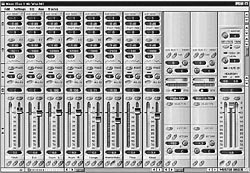 Taking the ball from Ensoniq, E-Mu introduces the PARIS Pro 24-bit digital audio workstation. The system comes with a PCI card, software, and 16-channel control surface with 100mm faders. Each mixer strip features volume, pan, solo, mute, 4 bands of parametric EQ, 8 stereo aux sends, and 8 channel inserts. Features include VST and Direct X support, mixer automation with editing right from the C16 Pro Control Surface, Undo/Redo for up to 99 edits per window, and set/recall up to 999 markers per project. The system is expandable up to 128 hardware tracks with a variety of I/O and syncing options. Prices start at around $4,995. Runs on both Mac and PC. www.emuparis.com.

Sound Devices USBPre ($695) is a complete, portable hardware interface for PC-based digital recording. Designed for USB-equipped Macintosh® OS 9 and Windows® computers (98SE, 2000, and ME), USBPre quickly interfaces microphones, line level sources, musical instruments, and consumer audio electronics with personal computers. Its 24-bit audio inputs offer the most direct signal path into the computer. All analog-to-digital and digital-to-analog conversion is done outside of the computer, in the USBPre. Powered by the USB port from either notebook or desktop computers, no additional power source is required. www.sound devices.com. 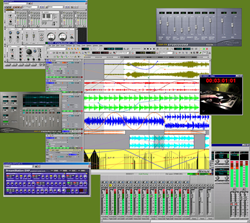 Alesis recently announced the ADAT HD24, a new 24-track hard disk recorder. An addition to the successful ADAT line, HD24 uses a proprietary method of writing to hard disk to provide 24 tracks of 24-bit audio on low-cost IDE hard drives, and drop-in compatibility with over 150,000 ADAT systems world wide. With an estimated street price of $1999, the ADAT HD24 overcomes data fragmentation which occurs in traditional hard disk recording formats via a new method of writing on hard drives, specifically designed for music recording, which reduces fragmentation of data and the required “seek time”, providing a greater level of stability in recording and playing back data. As a result, very low-cost, low RPM hard-drives can be used with exceptional results. For the first time, at about $90 for a 20 gigabyte hard drive, the cost of the hard disk storage medium equals that of ADAT tape in cost per gigabyte – less than five dollars. Entire 24-track projects can be stored on a single removable drive. Finally, Alesis engineered custom drive caddies and protective storage cases to establish today’s affordable IDE drives as the new exchange medium for music recording. Drives are hot-swappable, and fast back-up—a few minutes for an entire drive —is possible between two front-panel drive bays. The HD24 ships with two drive caddies and a 10 gigabyte hard drive which will yield approximately 45 minutes of recording time at 24-bit/48 kHz. The ADAT HD24 offers the digital audio and synchronization connections of the existing ADAT. The rear panel of HD24 includes 24 channels of ADAT optical inputs and outputs and ADAT synchronization IN and OUT connectors to allow HD24 to sample-accurately synchronize with other ADATs, and a BRC remote controller. www.alesis.com.

ewireless, inc.,the developer of #333, announced an agreement with Cable & Wireless, a major global telecommunications company headquartered in the UK. Cable & Wireless will be assisting ewireless with the global deployment of #333, the service that allows wireless phone users to respond directly to radio advertisers toll-free and airtime free. Cable & Wireless will work with ewireless to provide a #333.com mobile portal, enabling users to contact merchants online via Internet-enabled mobile devices. www.cw.com, www.333.com.

England’s GWR Group is moving its Programming Production department to a new, bigger location. The new facility will have 6 new studios all fitted with networked Fairlight DAWs, Yamaha O2R desks, and totally digital outboard gear. GWR’s Linc Kelly explains, “The department will expand from 4 to at least 8 producers. To make this work, instead of working 5 x 8 hour days, we will work 4 x 10 hour days. As a result, we will have 2 long weekends a month, and one week with 2 days off during the week. We now service 37 stations across the U.K. in an agency type setup. The stations send in what they want, and we book it in. Everybody works from a schedule, so it’s fairly stress free. We start looking for people in the next few weeks, and its all very exciting.”

Jeffrey Hedquist, President and Creative Director of Hedquist Productions, Inc. in Fairfield, Iowa, and RAP’s Radio Hed columnist was selected as a judge for the first round of nation-wide submissions to determine the finalists for the Radio-Mercury Awards. The second, final round of judging will determine the winners, to be announced June 6, 2001 at New York's Waldorf-Astoria Hotel.

Harris Corp. and Computer Concepts Corp. have signed a digital systems distribution agreement under which Harris Broadcast will represent Computer Concept’s Maestro and a new digital audio line to all radio and television broadcasters in the US and serve as the exclusive distributor in all countries except Australia, England, and Mexico. www.harris.com, www.ccc.fm.