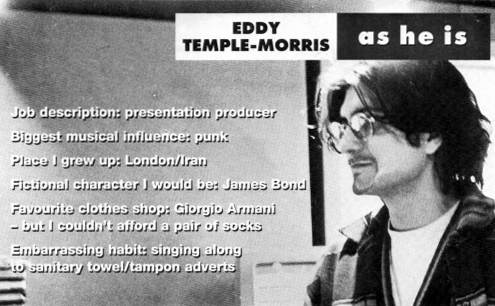 This month's interview checks in with the BBC once again. This time we look in on Radio 1, the BBC's hot new music station. A few years ago, Radio 1 decided it needed to "update" their sound more for today's youth. This involved a major overhaul of personnel and policies. And since the BBC is a non-commercial station, the production basically boils down to nothing but imaging. Eddy Temple-Morris is the man that landed the job of imaging BBC's new Radio 1. For production people, it's the "dream job" in the U.K.. Check out this month's Cassette, and you'll understand why Eddy got the gig. Check out this month's interview with Eddy to get a rare glimpse inside one of the world's biggest radio stations.

RAP: Tell us a bit about yourself and how you got into radio.
Eddy: I'm one of these many people who fell into the business. If I had a dime for every time I met an ex-bass player in this business, then I would be more than a millionaire. That's where I came from. I was a bass player. I played electric bass guitar and did backing vocals for loads of different bands from about 1985 until about 1992. Then I just figured I'd better get a proper job because I was going gray. I was twenty-seven. I was thinking from my kids' point of view, thinking that I didn't want to be a bass player for the rest of my life. I haven't got any kids yet, but I was thinking I wouldn't want my dad to be a session bass player.

So I went to a local radio station, BBC local radio, which is kind of speech based stuff. I went there on work experience just for a week. They asked me to stay on for another week, and then they gave me a job as a kind of coffee boy, really. They call it PA, production assistant. Within two and a half years I was a producer/presenter at that station. Then in April, two and a half years ago, I answered an ad in the paper which was the dream job at Radio 1, basically what the commercial radio stations would call head of production but what we call presentation. I went for it and they gave me the job. I must have said the right thing.

I joined when Radio 1 was at its lowest ebb. Radio 1 had to completely reposition itself because it started up in the sixties as a new music station, and the young listeners then turned into parents later on. From the station that your kids listened to, it became the station your parents listened to. So, when I joined, they were just in the process of not renewing the contracts of a whole bunch of very popular mainstream presenters and taking on some edgy young people. And the music policy went away from the stability of Phil Collins and all that lot and went towards Oasis, The Chemical Brothers and The Prodigy where we are now. So it was a total, complete repositioning for the U.K.s favorite station, which was potentially a nightmare. Millions of listeners were lost, but have now, almost to a person, been recouped. So I really did join at the bottom ebb. I said to them, "Look, your station sucks. Give me a go and I'll see if I can help turn it around for you." I'm one of the many people who have gone out on a limb and tried to push the envelope a bit, and it has worked.

RAP: What is one of the primary ways Radio 1 goes out on a limb?
Eddy: By challenging people with music policy. I mean, you talk to a lot of producers at radio stations and they say, "We are very cutting edge." It's a fairly stock line. They say "cutting edge" but they don't play the kind of bands that we play. We're the only station in the country that plays The Prodigy. They were at number one for two weeks. Manson, The Manic Street Preachers, Cooler Shaker, Khalif, The Fugees--well, The Fugees have crossed over now, but we were playing The Fugees years ago when they were The Fugee Translator Crew. Pulp, there's another band that hasn't really made it in the States yet, but we first played a Pulp single thirteen years ago. It wasn't even a single. They came in to do a live session. Oasis--we played their demo before anybody had ever heard of them. Because we're the BBC and don't have adverts, we don't have clients and people breathing down our necks. We can afford to stick our necks out and challenge people.

RAP: Your title is Presentation Producer. Are you the only one?
Eddy: There are two of us here, myself and Jeremy Godfrey whom I stole from Virgin. I was taken on with somebody else who proved to be a bit of a disaster. So they let him go and kind of made me the senior producer in the department and told me I could have anybody I wanted from England, Europe, America or Australia. I got Jeremy and took him off Virgin. Production on Virgin at the time sounded absolutely fantastic. I did a bit of homework, found out who it was, and then good, old-fashioned poached him.

RAP: What are your daily responsibilities?
Eddy: Well, we are the custodians of the corporate identity of the station. So I guess the parallel with a normal production person at an independent radio station would be the promos. We make all the promos. Obviously, they're not advertorial, but we have so many more shows on the network than a normal radio station does. Not only do we have the daytime sequence and the nighttime sequence and the overnights, but we have comedy shows. We have every genre of music represented in terms of a show or shows presented by the top person in that field. For example, there's Tim Westwood, who does the Radio 1 rap show. He's friends with every rap artist that is. He's the most famous white guy in rap, and he does the rap shows here. Danny Rampling does the house shows. He's a household name in terms of house music. And there's Pete Tong who does a sort of handbag show. We have people like Goldie Portishead doing Essential Mixes as we call them. All the most cutting edge dance lot are represented. We've got the Evening Sessions, the show that found Oasis and Radio Head and all these kinds of bands, with Joe Whiley and Steve Lamacq.

We have so many shows that we have to promote and cross promote. And we also have co-promotions where we sort of get into bed with a band or with an event. We write promos for bands, and they put our logo on their ticket, put Radio 1 flyers at their gigs, and we help to promote the gig. It's kind of shaky territory there because that's in the gray area in between the BBC and commerciality. We're not one hundred percent comfortable with that, but it's something that we have to do from week to week. But apart from all the promos that we have to make for all these things, we are also in charge of the way the station sounds. So all the bits inside a particular show, the way that the station is idented in a show, obviously, we have to do. And, of course, the diversity of the shows comes into it because a jingle or a sweeper or whatever you want to call it that we are going to make for Chris Evans--who has like eight million listeners in the morning--is going to be completely different from one we make for Tim Westwood, who is playing really hard-core rap music. Obviously, they're going to be two completely different kinds of shows, and we've got to respect that in our production and everything in between.

It's an incredibly creative job, and it keeps you on your toes because you've got just so much to think about. But that's what we do, everything from the jingles that go in and out of the news to the jingles, the beds, and the sweepers that the jocks use for their shows. I produced our jingle ID package with Dane Blair and Jeff Koz from Who Did That Music in L.A.. They were Who Did That Music, but they've now divorced, as it were, and they are two different companies. We got the 1996 Pro Max Gold Award for Jingle Music Package/Large Market for that package. It went down pretty well. I know that the guys at Z100, whom we worship, heard it and said, and I quote: "What drugs are those guys on and can we have some?" which made me very happy.

September 01, 1997 11726
by Jerry Vigil In a world full of digital workstations to choose from, it’s a pleasure to come across the Orban Audicy. Like its predecessor, the DSE-7000, the Audicy is a workstation designed for radio production first. Radio...
Read More...
© 1988 - 2023 Radio And Production, LLC
Go to Top