“Oh Shit!” The discount garbage bag I had overloaded decided to peel wide open, and I watched assorted memories from third grade on through college drift across the thawing parking lot, coming to rest in the grimy, icy puddles. As I scrambled to scoop them from the half-frozen water, several cars drove through the lot, and I watched assorted newspaper clippings and pictures of former classmates from Junior High ground into soggy pulp. Granted, they were headed to their final resting place in the trash bin just feet away, but it still seemed that this was an even less worthy end for those long ago pieces of my puzzle. Still, it’s about damned time! 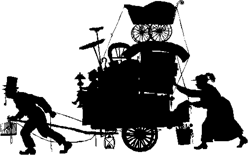 I’m about to turn 40; you should know that. A distorted lens that all of my perceptions are filtered through, the fact that I’ve stumbled through 40% of a century flanks my every thought. “Too old,” that obnoxious disembodied voice croaks in my mind. It’s an old companion. It was a squeak when I was an overweight kid, vainly swinging at fast balls, a breaking adolescent whine as I sweat through that first heart-breaking plead to join me at the school dance, a mature, condescending affirmation of my lack of skill when I was passed over for my first full-time radio job. Ever present, ever disabling, the one bully who never walked away after they wrapped me around the monkey bars for trying to defend that little girl they were picking on back in first grade. It mocks me now, assuming the grizzled tone it wants me to resign myself to. I’m about to kick the old coot’s ass.

I’ve been lying to you. If you’ve read this column for any length of time, you’ve endured several columns on personal change. On and on I’ve babbled about how wonderful it is, what a growing, learning experience changing job and place can be, how it frees the Creative mind. What a load of crap. The fact is, I have always hated change. The uncertainty of it scared the hell out of me. Like the majority of humanity, I am a creature of habit, and enjoy all the creature comforts it brings. That does not mean that habit is a good thing, and in my case it was becoming a miserable cycle—more on that later. The bottom line is, while I’ve been scared of change in the past, a fresh start has been long over-due.

“Do you want fries with that?” I’ve been telling everyone that I’m practicing saying that. I’ve gotten a lot of mileage out of the gag, but the truth is, even if I end up really needing the skill, it wouldn’t bother me in the least. I am moving to Raleigh, NC, to be with the one great love of my life. For too long we had been enjoying the heaven of each other’s company for several days of the month, then the purgatory only real loneliness can bring the rest of the month. I have been looking for jobs there for some time now, but it seemed that most companies found it hard to seriously look at a candidate some 1,400 miles away. What to do, what to do?

I can be a little stupid sometimes. The obvious answer has to be administered with the subtly of a 2 by 4 across the skull. In this case, the 2 by 4 came in the form of the news that my part-time video gig with the City of Sioux Falls was being eliminated and that I was not chosen for the new full-time spot. I could blame it on city government politics, but I choose to see it as the sign that I need to follow my heart… finally! Duh!

Do I have a job? No. Am I terrified, the feeling amplified by that raspy old fart’s voice in my mind, insisting that I’ll never find anything, that I’m not good enough for anything other than greeting shoppers at Walmart? Of course not! This is less a Leap of Faith than it is a carefully planned move to the best time of my life, and even if I’m not in on the plan yet, I am excited by it! It means that I will share my life with the most wonderful woman I have ever known. Work is just a trivial detail that will happen; I know it.

So, is there a moral here for Creatives? Perhaps. As I lighten my burden of the corpses of old memories in anticipation of the journey to this amazing new time in my life (I’m such a Packrat!), as I watch my 40/40,000 mile warranty near its expiration date, I smile and wonder why I cared. All those years of agonizing over the right words, the right music, the perfect voice-over, they were all important to the job. But that’s all it was, a job. Work shouldn’t be one’s life. Life should be enjoyed, celebrated, shared. Every moment, even the “uneventful times,” should fill a person with happiness and contentment. Work won’t do that for you. Listening to your heart, the voice inside that really does tell it like it is, will. If you’ve never really, truly been in love, it’s possible that you’ve gone through a few barf bags by now, but trust me, it’s real, and so is the joy that goes with it. It took a long time and true love for me to realize that, but as I mentioned, I am a little stupid sometimes.