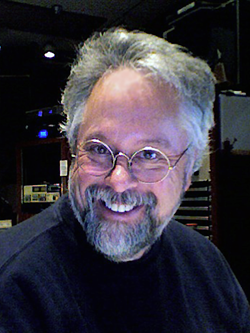 We last checked in with Howard Hoffman in December of 1997, about 3 years after Howard had appeared on the scene at KABC. Twelve years later, he’s still cranking out some of the most creative imaging on talk radio today, as was noted in the recent RAP Awards, in which two of Howard’s promos tied for the first place trophy in the Large Market Promo category. This month’s RAP Interview catches up with Howard as we get the inside story on his winning promos, pick his brain for some creative production tips, and check in on his growing voice-over biz. Be sure to check out audio from Howard on this month’s RAP CD!

JV: When we last spoke, you had been with KABC for about three years. That’s now become 15 years. How did your responsibilities change over those years, and what are they now?
Howard: Right now it’s strictly KABC. When I first got here, it was for KMPC “710 Talk,” and then I gradually moved into the KABC slot as well. Then 710 went through all these different permutations. There was The Zone -- “talk radio’s not just a guy thing anymore.” That was the all woman appeal, woman-oriented talk show format. That became Radio Disney then Radio Disney got moved to 1110 when we took over ESPN — or I might have that backwards, which shows you just how insane all the changes have been over the years. So it went from one radio station, to two radio stations, to four radio stations, back to three radio stations, then two, and now just one. It’s just an absolute roller coaster as far as trying to keep up with it. It was like a nursery -- one stops crying, the other two start crying, and it was crazy to keep up with all of it.

JV: And you were doing the imaging for all of them?
Howard: Yeah. After a while, not so much Radio Disney because the network took that over, but it was mostly ESPN and KABC.

JV: Yes, we know Stew. You both did very well in this year’s RAP Awards.
Howard: Yes, we did very well. I was very happily surprised. Thank you for letting us barge into your playground and letting us be part of it. It was a very, very nice surprise, and I’m really grateful to the people who did the voting on that.

JV: We’ll talk about those promos in a minute, but I was curious, after listening to some of your demos online and listening to the promos that you entered for the awards… given your background as a morning show personality, it sounds like you’ve basically carried that personality into the production room? Would you agree?
Howard: Absolutely. I had been on the air from 1971 until ‘94, and having been on the air for all that time, there’s just no way that I can deny that it gave me a good sense of timing, gave me a good sense of humor, and gave me a good sense of what sounds good on the air, from the listener’s standpoint, because that’s what I always did when I was doing shows. I would always put myself in the vantage point of the listener, saying, “Okay, now, what would sound good coming out of the car radio if I were driving around listening to this nonsense that I’m doing on the air now?” So that gave me a good perspective, and I think more than anything else in recent years, working in the voiceover community here in Los Angeles has helped. I’ve been doing a lot of radio spots for advertising agencies, etc., and some animation — not as much as I’d like, but everybody complains about that -- and I think what that does is it gives you a chance to work with other people, to work on your timing and what works best with dialogs or with tri-logs with three people, or four people, or five people. Yes, I think all these things, all these other experiences, besides doing production, definitely helped me out over the years.

JV: Have you managed to stay off the air all these years?
Howard: Yes, I’ve succeeded, and I’ve been asked. However, on two occasions I have gone back to New York City to do special weekends. It was funny because the first time I did that was for WNEW, and they were Fresh 102.7, kind of a retro dance music station. They heard I was coming to town and they said, “Oh, would you like to do a shift? Will you do a couple of shifts for us on Memorial Day weekend?” I said, “Oh, great! That’ll be a lot of fun!” Then I found out later on that they were calling it “The Legends of Dance Radio,” and I said, “Legends? Oh, no!” You might as well give me the lifetime achievement award, for crying out loud. That’s like the end of the road, last exit before freeway ends! It’s like, I’m a legend? No, no! But I did it, and we all had a great time with it, and I got together with some people I worked with in the past. Then the second time I went back on the air was last year when I did a shift on CBS-FM, to do their Saturday night or Sunday night; I forget which one, but they do people who have worked in New York radio in the past. So yeah, that was fun.

JV: Getting back to your RAP Awards this year, I think you’re only the second person who has tied himself for the trophy in any one of the categories. You won with two promos that you did for KABC, one of which was titled “KABC vs. TV.” How did this concept come about? Why a radio vs. TV spot?

Howard: I really wanted to do something with that Mac vs. PC campaign. I was looking for the music for that commercial, and I have no idea where I found it. I think a friend of mine sent it to me and it sounds like a friend of his made the music; and when it landed in my lap I said, “Okay, now I’ve got to come up with some kind of angle here.” Even though radio is an older technology than television, I resisted the urge to go against the internet, because that was one of the possibilities that I was thinking of — you know, KABC vs. the web. But the web seems to be the future, and it’s growing just enormously, and I didn’t really want to put down a medium that we are on. I mean all radio is now leaning towards the internet, and I wanted to leave that alone. So I just wanted to put down a medium that I knew we were never going to be in, and that was television. Then I said, “Okay, what’s the main difference between radio and TV?” The immediacy, the fact that you can talk back to the radio immediately, and so that’s where that came from. It was just a matter of coming up with the concept first and then coming up with the content afterwards.