As some of you know, I’m a Macintosh guy. While I’ve used Wintel computers now and again over the last 15 years and I’m familiar with them, I do all my audio work on Macs. So when RAP Editor Jerry Vigil invited me to review a multitrack editing package from German manufacturer SEK’D that runs under Windows, I gathered my courage, rented The Empire Strikes Back, and prepared for a journey to The Dark Side...

Nah — just kidding. This stuff is great! The box that arrived on my doorstep included Samplitude Studio version 5.5 and the company’s PRODIF PLUS sound card. First, we’ll install the sound card into the old Dell PC. 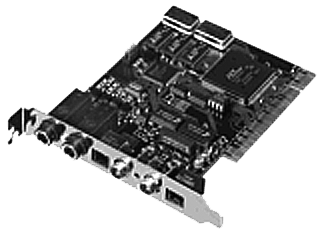 The PRODIF PLUS audio card is a short PCI card, with both analog and digital I/O (figure 1). The analog input and output are unbalanced on two stereo phone jacks, with the left channel on the tip, the right channel on the ring, and ground on the sleeve contact. Analog input sensitivity can be set via jumpers to either -10dBv or +4dBv. The level of the analog outputs is adjustable in software, in increments of 0.5dBv. The resolution of the AD and DA converters is 20 bits and they will handle sample rates from 11.05 to 48 kHz.

The card supports several digital formats. S/PDIF and AES/EBU in and out are available on RCA jacks, and there are also two optical jacks that will handle either stereo S/PDIF or eight-channel ADAT format digital audio. Supported sample rates include 32, 44.1, 48, 64, 88.2, and 96 kHz, and the digital I/O accepts bit rates from 8 to 24 bits.

I like the fact that the optical jacks support both S/PDIF and ADAT formats transparently. However, I was concerned about using AES/EBU on an unbalanced RCA connector, but I was able to record and playback DAT tracks using simple XLR to RCA adapters and short cables. For longer cable runs of AES/EBU, I’d recommend using 110/75 ohm transformers made by Canare (www.canare.com) and others.

The PRODIF PLUS package includes the PCI card, a manual (in German, French, and English), and floppy disks with drivers for Windows 95/98 and NT. Installing the card was a breeze — Windows 98’s Plug and Play feature found the card right away and prompted me to install the driver from diskette. With all the horror stories I’ve heard about IRQs, slot conflicts, and “Plug and Pray,” this part of the process was surprisingly simple. Whew! Once installed, the driver puts an icon in the control panel section of Window’s task bar. Clicking on this icon brings up the PRODIF’s configuration windows (figure 2). Clicking on the check boxes in the PRODIF PLUS window activates the various I/O options, and opens the associated meters in separate windows. Besides being fun to watch, the meters would be useful for troubleshooting and seemed accurate.

January 01, 2000 25287
By Steve Cunningham The compact disc has become so widely used and accepted that it has nearly overtaken the cassette as broadcast’s audio recording medium of choice. Blank CDs are now cheaper than blank cassettes of similar...
Read More...
© 1988 - 2023 Radio And Production, LLC
Go to Top