Q It Up: What is your favorite microphone for recording voice tracks?

Ron Schriek, Profisound Audio Design,<info[at]profisound.nl>: Here at Profisound AD in Holland we tried a lot of microphones. For normal use in commercials (male/female) voices I like to work with the Neumann TLM 193. Why? Just because the sound is fresh and neutral. For close-mike “warm” male voices, we use the Neumann M149 Tube Microphone. The warmth is great, but the presence of this mic is a bit too “coloured” for normal use.

Craig Jackman, CHEZ 106.1-FM, Ottawa, Ontario, Canada, <craigj[at]canada.com>: At CHEZ we have a decent selection of mics to choose from. The best ones that we have on hand are the Beyerdynamic MC-740 large diaphragm condensers, on the cardioid or hyper-cardioid pattern. They get the most use as they are the most neutral on the most voices and are relatively immune to the affects of temperature and humidity. Good announcers can really work the proximity effect on these in a very positive way. All our mics are set to cardioid. It is very rare when we will use a mic set to omni or figure-8. For my voice, I use a Microtech-Geffal PM-860 that makes me sound great, but seems to make everybody else sound shrill.

In helping a friend set up a home voice-over studio, I got the chance to test a whole lot of new mics in my studio against what we normally use. The AKG Solid Tube mic was my favorite with absolutely incredible warmth and presence—a really special sound I thought that was priced really well. She ended up buying the Rode NT-2, which I thought sounded fine—very even. We tested the new Neumann TLM-103, which surprised us all at how bad it was—definitely the worst of the bunch.

Scott Taylor, Providence Media Group, <ProvMedia[at]aol.com>: We’ve all worked with a variety of mics from Electro-voice, Sennheiser and Shure, but the award goes to the RE20. 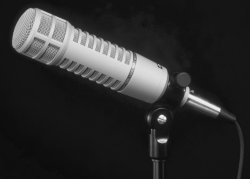 Don Lawler, Target Marketing, <GoodSpots[at]aol.com>: I prefer the RE-20. It’s a workhorse—rugged and has a nice smooth response and sound. I call it the “poor man’s Neumann” mic.

Dean Tyler, Voice & Vision Productions, Ft. Myers, Florida, <Deansvoice[at]aol.com>: Well, I am an equipment junkie, so I have a few I like and use. The two I use most often are a Sennheiser MD 421-U5 and an AKG C3000. No technical reason why, I just like the way my voice works with those two when I run them through a Valley 400 processor. I also use an AT-RE-20. It gives me a nice clear sound with a crisp high end. I just recently bought a Rode NT-1, and for the price, found it to sound very big and full. But I am still learning to work with it and running it through a couple different processors to determine the best set-up for it. A fellow VO guy named Steve Wood swears by his AKG 414, so down the line, I am anxious to try that one too!

Stew Herrera, KLOS-FM, <stew[at]earthlink.net>: About a year ago I bought a new mic from Soundelux here in LA. It’s a big cardioid pattern FET mic called the UI95. It ran me about $1200, and I use it almost exclusively for everyday stuff. It has the standard controls you’d expect to find—20db pad and a low cut filter. It also has a switch for “fat” operation, which means it enhances bass response. I don’t use that setting much for everyday vocal tracks, but when I need to record music, it’s a cool option to have. There are RE-20s lying around everywhere, and if I’m doing two voices in a dialog, I’ll use one of those just to color the other voice—saves time in trying to tweak. To tell the truth, I’m not really all that worried about the microphones I use, so long as they meet some professional standard. In a “real” recording studio, where they cut albums, you’ll find guys choosing mics from among dozens of models. But in radio, it’s usually just a mic or two. We in radio don’t usually have the budget for a bunch of mics, the time to go sifting through them, or the need to. So hopefully, you have at least one good mic to use as your main workhorse. The RE20s are everywhere. So are Sennheiser 421s, and Shure SM7s, and they’re all good mics. Our main studios are outfitted with Neumann TLM 193s. I should probably give one of those a try and see how it compares to the UI95, but the differences will probably be pretty subtle. At this point, I’d be a little bummed if I had to go back to an RE20 or a 421 as my main mic because I can definitely hear the difference. I’ve been spoiled. The fact is, most stations make due with dynamic mics. EQ, compression, and processing can make up for some of the difference, but at the end of the day, a well written piece of copy cut through a Radio Shack mic will always sound better than hack copy cut on a solid gold mic anyway.

Andy Frame, <aframe[at]usa comp uters.net>: Never got a choice! I’ve used either the company supplied black Sennheiser with the bass-boost collar, an Electro-voice RE-20, or one of many of the Shure or Electro Voice “generic” mics. I do get a chance to use a Sennheiser shotgun when doing v/o for video, and it makes me sound very nice. It offers a very true representation of my normal speaking voice, and with a gentle gate and compression, there is no “inhale” noise. It also lets me get into my voice acting, because I know as long as I stay within so many degrees of the axis, I can get as loud or soft as I’d like. On the flip, I like the ability to massage the bass proximity effect with the RE-20 and use it (with tweaked companding) for nifty vocal fx.

Dave Obergoenner,  <daveo[at]mvp .net>: The Neumann U-87, but only because no one in radio can afford a U-67 anymore. The U-87 is the closest thing to an ear we can afford! On a tighter (still) budget, the new Shure KSM-32 condenser sounds similar, but not quite as good.

Dennis Daniel, Topline, Ronkonkoma, New York, <TOTTDenny[at]aol.com>: No question about it, the RE-20! Ever since I first saw this giant behemoth of a mic, I was amazed by the resonance it gave my voice. It cradles your vocal vibrations and gives you that booming GOD-like sound. It’s also great for those times when two people have to be on the same mic. And hey, it looks cool as hell! What mic do you always see in photos of radio station personalities? The good ol’ RE-20.

Donnie Marion, 104 KRBE, Houston, Texas, <dmarion[at]urjet.net>: We use Audio Technica AT4033s in all our production studios. We’ve used them for about 5 years and have liked the sound enough to not look around for anything else. When we first demo’d the AT4033, we noticed it handled “loud voiced DJs” better than the mic we had (meaning we didn’t have to turn down the input to the Symetrix). The old mics were Shure ( I think SM-7s & SM-5s). There was one guy who sounded fried even when he wasn’t anywhere near max’d out. We figured if it can make him sound clean, we need to keep it. That’s pretty much been my experience. When I go to other studios for voice work, I usually don’t like the sound of those mics as much as my studio here at work, but I don’t notice what mic is being used either.

Bryan Young, Zimmer Creative Services, Cape Girardeau, Missouri, <bryany[at]mvp.net>: That’s a good question. We have three choices in our main production facility: an EV RE20, a Neumann U87, and most recently, Shure’s new KSM32. A lot depends upon the application. It seems the jocks like a microphone that really punches—in an attempt to make their voice bigger than it actually is (EV RE20). As a writer/producer that is looking for tools to help convey the full spectrum of vocal emotions, I prefer the Neumann. It’s ideal for picking up subtle sounds like the airiness of a whisper or a sigh. I recently took the new Shure KSM 32 (studio condenser) on a test drive. It is almost as close to an “ear” as the Neumann, but lacks somewhat in the upper mid-range. However, the Shure KSM 32 is a fraction of the cost of the Neumann and may be an affordable way to get close to that sound.

Kurt Schenk, Jacor Rochester, <PookProduk[at]aol.com>:  I really like the sound of the AKG-H17A. I love the fullness it adds to my otherwise “tenor” voice. I’ve put no windscreen on it. We did at one point, and it really cut back on the base qualities of the voice. I just had to learn how to cozy up to it, and I love it. We’ve had that mic here at WHAM/WVOR for 15 years. I think that says a lot.

May 01, 2011 7266
by Steve Cunningham Plug-ins designed for speech and voiceover evidently comprise a hot little market segment, judging by the email responses I received from the last review of a speech-oriented processor. Several voice artists...
Read More...
© 1988 - 2022 Radio And Production, LLC
Go to Top