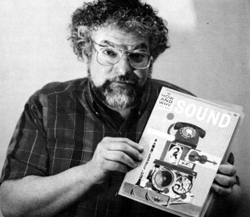 Jay Rose started like many of us do, in high school, with dreams of becoming a disk jockey. But rather than spending several years on the air and in production at a radio station, Jay took the solo route much sooner. A 4-track studio in his home quickly became a multi-studio production facility in downtown Boston and his career took off. Eventually, Jay ended up back in his house once again. Only this time, his meager 4-track home studio has become his Digital Playroom, complete with an Orban DSE-7000, an ISDN line hooked up to a Telos Zephyr, a couple of Eventide DSP4000 Ultra-Harmonizers, a Marantz CD recorder, a couple of synthesizers, a PowerMac with a ton of audio software, a couple of DAT decks, and an impressive array of effects and other toys. Jay's list of clients is just as impressive. The Clio/Emmy award winning producer stays busy with clients such as the A&E Network, CBS Television, PBS Television, AT&T, Blue Cross/Blue Shield, Aldus Corporation, AKG Acoustics, Abbott Laboratories, and dozens of TV and radio stations around the country and in Canada just to mention a few. And Jay's talents go well beyond production. If you use a DSE-7000, you've probably enjoyed the "user-friendly" manual that goes with it. Jay wrote it. As you'll discover, Jay's technical expertise is well above that of the average producer, and we didn't hesitate to take advantage of that. Join us as we pick his brain on the latest ISDN technology and get some tips on home studios, directing talent, and more.

RAP: Where did your career in radio production begin and how did you wind up working out of your own studio at home?
Jay: In high school, I knew I was going to be a disk jockey, with the absolute certainty and total wrongness that a high school student will have. I was doing everything I could possibly get my hands on with PA systems, doing announcements in the school, etc.. I even built a pirate radio station. When one of the local AM stations would sign off in the New York City area, I would sign on two minutes later with a ten watt transmitter that I built myself using tubes from an old power amplifier and an RF generator. I modulated it with a PA system amplifier. I would put on a tape and walk around the neighborhood listening to myself.

After high school I went to Emerson and discovered a couple of things. I discovered the world of production, which is good when you've got pipes like mine, because I found out I was never going to make it as an air talent. The year I graduated from Emerson was the last year they required eighteen credit hours of speech theory, argumentation, phonetic transcription--things I had no desire to learn whatsoever. The whole freshman class was struggling through this stuff, and it's the basis for what I do every day now.

So I graduated from Emerson having been Chief Engineer of the AM station there and Program Director of the FM station, and it was the time of 'Nam. One of my instructors encouraged me to write rather than just to make noises, to try to do something creative with the medium. Some of the stuff I had written won a minor prize. So my name was on a mailing list, and I got a call from Bowling Green State University in Ohio saying, "We see you won this prize. How would you like to come out here and take a graduate course and get an assistantship so you won't have to pay for your graduate degree." I said, "You mean I don't have to go to jail or to Canada or to 'Nam?" And they said, "Sure." So I went out to Ohio where I was the Program Director of the noncommercial FM station and, at the same time, worked on their TV station. I could do anything I wanted to with the broadcast day. So I tried a lot of experimentation with things like program wheels and pre-formatted elements and stuff that NPR suddenly discovered fifteen years later. I had no idea what I was doing, but I was having a lot of fun.

I came back to Boston after I finished at Bowling Green and was offered a job at a down and out film studio where I got plugged into the advertising world. The film studio needed somebody to rewire the sound system. So I started rewiring, and the guy saw that I knew something about technology and would work cheap. So he made me Production Director of a film company. I'd had two film courses. With that kind of management, it's not surprising that a year later they went belly up. In the course of that, I created a classic film. I did a midnight ninety-second TV spot. I wrote and produced it for the Lifetime Hair Trimmer Comb. This was a spot that ran PI on marginal UHF stations. You run this little plastic thing through your hair, and you'll never need to go to a barber. So the film studio went bust, and I looked at my reel and said, "Gee, I'd better stay out of the film business, but, boy, there are some nice sound tracks here." So I started doing work for ad agencies. I was doing sound, primarily radio and some sound for TV, basically out of my house. I was doing editing, sound effects work, editing library elements, the kinds of things you do in a production room. I found that I was able to do it in my house instead of at a station and make a decent living at it. So I just kept doing that and eventually had a big downtown studio with four rooms and twelve employees, and we were doing about sixty percent of anything national to come out of the Boston area--strictly advertising, no music recording.

I sold the studio in an urban development move. There's a skyscraper there now. Then I went to work at a mega-facility which then became Editel. At the time, it was Century III Boston. I went to work as their chief sound designer doing what I'd been doing all along, only now I was doing it for NBC and Parker Brothers and outfits like that. I was spending most of my time with ad agency types working under a lot of pressure. When you do sound in a big facility that does 35 millimeter film and network level video editing, even though you have a beautiful room to work in and you're paid very well, you're dirt because the sound guy is the guy who gets the last piece of it after the budget is burned, after the video edits took three days longer than they were supposed to. I found myself doing a lot of Friday afternoon sessions that started at nine a.m. on Saturday, sessions where there was no money to bring in any help, and, of course, it had to be on the air on Monday. After about four years of that, my wife told me to quit before I drove her crazy, so I did.

I built a studio in my attic. I essentially came full circle from where I'd started only I'd started with a Teac 3340, and this time I had a TASCAM 8-track. That was about eight years ago. The studio flourished. One of the first major things I got into was the Orban editing system. The room has since grown from my attic to a first floor room because I needed to be able to stand up without bumping my head. Along the way I discovered that when you're working for yourself, you can work on almost anything you want to. If a project is interesting, you don't have to say, "Gee, is this what I'm in business to do?" So if I'm spending a day working on programming for Eventide, or writing an article, or writing a script for somebody, and my studio isn't in use, there's very little overhead. I don't have downtown real estate. I don't have downtown employees. There's an amazing amount of freedom.

January 01, 2004 8455
by Steve Cunningham The world of software DAWs has been significantly rocked in the past year or so... IQS and SAW are essentially gone, Apple bought Emagic and discontinued the PC version of Logic, Cool Edit Pro is now Adobe...
Read More...
© 1988 - 2023 Radio And Production, LLC
Go to Top