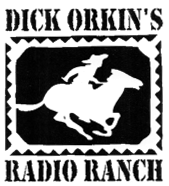 RAP: One of your workshops deals with a Radio Ranch method of idea-generating based on a process called DWE? Tell us a bit about this.
Dick: DWE is Dialogue With Experience. This isn't something I'm going to be able to explain in a few words because it's an all-day workshop, but the process really involves what I call a post-modern technique of advertising. Instead of copying or cloning or imitating other advertising campaigns and seeing the consumer as someone you do something to, what you do is decide you are the consumer. It's called making yourself the customer, which is not a new idea. Most of the advertising greats always believed that was the way to approach creative concepting for advertising. Leo Burnett said to his copywriters and to his advertisers, "If you can't become the client, get out of the advertising business." So, we take that literally and call upon our own experience, not necessarily with that particular product, but in a like category, and we invade our own psyches in order to come up with some creative material--our memories, our experiences from our family life, from our media life--that we can then use by a three or four stage program to develop into advertising ideas.

RAP: Is this part of the seminar, "Radio: Ad Crafting with Soul?"
Dick: Yes. The idea is to find and create an emotional connection between you, the creative person, and the radio audience. Radio has been doing that for a long time. That's why it's called the personal, up close, intimate kind of medium because it has that capacity to form that relationship. Strangely enough, that's what all of the new post-modern literature today seems to be talking about--forming a relationship to the consumer. And I always point out with some pride, and maybe some people would say arrogance, that radio has been building that relationship for a long time.

RAP: What are some other major topics that you cover in this workshop?
Dick: Well, I review what I call radio detours, where radio gets off the road sometimes because it's still connected to what's sometimes called a persuasion model of advertising, which is really a modern concept. It's very rational and logical. It says to people that you should buy this because it will be good for you or it will provide these benefits to you. It's that "unique selling proposition" idea, but there's such a parity of products and services today that one can't really talk just in terms of a unique selling proposition anymore. So, in the content of the message, in the style and tone of the message, you need to do something that goes beyond just the persuasion model. What I do is talk about how radio gets off track sometimes with that persuasion model and believes that radio advertising is about words, and it's not. It's about ideas, emotional ideas in particular. So I spend a lot of time talking about what I call the detours that trap people, particularly local and regional advertisers, into doing radio advertising that doesn't use the medium to its fullest extent.

Then I spend some time talking about performance, which is a major issue for me. I'm talking about the voices that are used to either produce or just do radio commercials live. My own opinion is that the performance is key to the success of an advertising campaign. So I spend some time talking about either directing, producing or performing in radio commercials which, by the way, is what Dan O'Day and I will be doing at our workshop here in Los Angeles in August. It has a very lofty name. Dan called it the International Radio Creativity and Voice-over Summit. I think he changed Voice-over to Performance. The idea is that we're going to talk about both the words and the spirit of the time for radio because on the eve of the twenty-first century, both the spirit of the time for advertising and, therefore, the words have changed. In different ways, we each focus on that issue in a series of workshops and panels. We're hopefully going to have some advertising creatives, management creatives, the hot shots, come in and talk to us about how they see radio playing a role in the new spirit of the time.

RAP: You also have some voice-over workshops. Tell us a little about these.
Dick: One voice-over workshop is called "The New Art of Radio Advertising Performance." That's an all-day workshop. Then I do a half-day workshop that I've done with Dan in Dallas and I'll do again for this event in August that's called "How to Make Everything You Do on the Air Your Own." It's sort of a radio personality application of our advertising workshop, "Radio: Ad Crafting with Soul." "How to Make Everything You Do on the Air Your Own" really has the same kind of goal behind it, and that is to take personal experiences and transmute the material you're working with. It may be a joke you picked up from somewhere, or it may be some kind of material you picked up off one of the wire services. Whatever it is, you filter it through your own experience in order to make it more personal. There are a number of those workshops coming up all over. I think the new schedule for the workshops just went up on the Web site. I'll be doing those in Kansas City, Baltimore, Boston and a few other places in 1996.

RAP: More and more, we keep hearing how the agencies don't want radio voices on their commercials, that voice that so many people in radio have acquired over the years and have so much trouble getting rid of. That's true now more than ever, wouldn't you say?
Dick: Yeah. In fact, I did a piece for CompuServe that was from the Performance workshop, and that's precisely what the article is about. It's called "The Packaged Radio Performer, Dick Orkin Comes to Bury, Not Praise." What I'm suggesting is that what continues to hurt radio in terms of its joining mainstream advertising media as an effective ad medium, is the tendency for management of radio stations to allow DJs to continue this kind of what I call cloned radio sound. I mean, they learned it from another DJ. They said, "Oh, that's what a DJ should sound like." If you think of the parody that Gary Owens did and still does, when he cups his ear on the old Laugh-In show, that's precisely the sound that comes out. There's a guy by the name of Mitch Albom who did an article for the Detroit Free Press who says that the problem with that voice is that radio sounds alike today, all the time. And because there is that kind of sameness of format no matter what part of the country you're in, you'll hear that same sound. He calls that the homogenization of America by radio formats. I think his analysis of why it happens is wrong, but I agree with him that it's happening, and I urge radio station management, and I urge radio producers and agencies to avoid that listening to your own voice kind of sound. I still get audio tapes from people that say, "people tell me I have a voice of God sound." What I want to say to them is, to quote the Nietzsche thing, God is dead; now get a life because that's what the people really want to hear.

It's a continuing problem, and part of my goal in my workshop and my classes here in LA is to get people to drop that kind of radio "back in the throat" sound. I do that by applying that same technique that I use in "Ad Crafting with Soul," making the text their own. There's a very famous writer and teacher of speech and radio and theater in London, Patsy Rodenburg, who says that the solution for all performers is to remember you're telling a story and you've got to make the text your own. That is the major goal of all my workshops, the classes and this larger workshop, to show performers how to take the text and make it sound like their own and not just do a "hand cupped behind the ear" radio voice.

RAP: Making the text their own...this is something actors do all the time. We're talking about turning radio announcers into voice actors.
Dick: I'm convinced that performance in radio today is an acting skill, and some of the people from radio stations are naturals. Arthur Godfrey was a natural in many ways, and Howard Stern is a natural. Rush Limbaugh is a natural in many ways. They're actors, and if you don't have that, then go take an acting class is what I urge people to do. You need that. You can't make it in competitive radio voice-over today without some acting instinct driving your performance.

RAP: How many acting classes are we talking about? For how long should a radio production/voice-over person take acting classes?
Dick: I think you take as many as you need to get the job done. If you're a rotten actor, we're going to hear it on radio. I have a number of television and radio news people who want to make a switch and move into voice-over. They're going to have great difficulty doing that because that news voice is so totally imbedded in their vocal style that they really have to struggle to get it out of there. What we do to loosen them up is improv exercises, which is sort of a contemporary approach to acting these days anyway. I have a great friend in Avery Schreiber here in Los Angeles who teaches improv. What I do is send most of these news people to improv classes to get some freedom, to break up some of the rigidity in their approach and in their style, to feel free to use some of their environment and their experiences in their communication style.

So the answer to the question is they have to do it as long as it is required. Some people can get it right away. Eric Tracy is on KABC radio here. Eric came to my classes for five weeks and one day it clicked for him. He suddenly understood what it was he needed to do to talk to people in a more direct way, and he didn't take one acting class. It just came to him as a result of something I said or something he said to himself. For some people it will be an instant kind of thing, and for others it's going to take longer.

December 01, 2009 7778
by Steve Cunningham As anyone who’s been around the audio business for more than twenty minutes knows, Mackie has been making some very cool small mixers for a very long time. After all, the original Mackie 1604 is the stuff of...
Read More...
© 1988 - 2022 Radio And Production, LLC
Go to Top