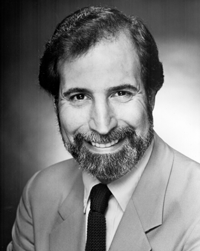 Newsweek has called Dick Orkin's Radio Ranch, "the established masters of the Advertising Theater of the Absurd." L.A. Magazine describes his voice as, "A schlemiel adrift in a surreal sea of supermarkets." Listen to his demo on this month's Cassette, and you'll say it's some of the best work you've ever heard. After attending Franklin and Marshall College in Lancaster, PA then the Yale School of Drama, Dick returned to Lancaster as News Director for WLAN. From there it was off to KYW in Cleveland as the News and Public Affairs Director, then to Chicago and WCFL as Production Director where Dick's long running radio serial, Chickenman was created in 1968. It wasn't long before Dick's talents took him out of the radio station and into his own commercial production company which, to date, has picked up more than 180 advertising and radio awards. When not busy cranking out some of the nation's best commercial production work, he's sharing his expertise in various workshops throughout the U.S.. He's easily one of the greats in our industry and gives us a wealth of insightful information to absorb in this month's RAP Interview.

RAP: Describe a typical day at the Ranch.
Dick: Well, the first thing we do in the morning is review the work we did the day before. We take a look at the writing and at some of the brainstorming sessions we've had. We usually do that for about an hour. Then we discuss areas where we need to clean up and fix up whatever work we've done the day before. Then around eleven o'clock, eleven-thirty, we usually have our first briefing of the day with an advertiser, unless they're on the east coast, in which case it tends to be a little earlier than that, around ten o'clock. Then after the briefing, we're usually in the studio or writing, one or the other.

RAP: When you're in the studio, do you ever get the urge to sit behind the console and play around with the toys?
Dick: No, no. I'm a producer/director/writer/performer, not a production engineer. We have two production engineers.

RAP: How did the Chickenman get started at WCFL?
Dick: It was about 1967 when the Batman television show was very big. It was sort of an overnight sensation. My Program Director, Ken Draper, suggested we create a superhero since we seemed to be in that superhero camp comedy style at the time. He came up with the notion that I develop a superhero for each of the personalities on the station, and the one that I developed for Jim Runyon was the one where I played Chickenman. There were others for the other personalities that lasted maybe two or three weeks and another that lasted almost a year. But the Chickenman went into syndication.

RAP: Is Chickenman on the air anywhere these days?
Dick: It's probably in about thirty or forty markets.

RAP: Are you still producing some episodes or just running the old ones?
Dick: I haven't produced them for almost twenty-two years.

RAP: Was this your first jump into comedy writing and producing?
Dick: No. Prior to coming to WCFL radio in Chicago, I had been a free-lance writer of both advertising and comedy features for various radio stations, usually three and a half, four minute features that ran throughout the day. They were sometimes contest comedy features or seasonal comedy features. Back in Cleveland, I did a two and a half minute feature that ran for two weeks before Christmas called Angryman. This was probably the antecedent of Chickenman. Angryman was a guy who just got so absolutely irritated at all the pressures of the Christmas season that he exploded and became someone else.

RAP: When did you decide it was time to leave radio and go out on your own?
Dick: Well, that was in Chicago where the trend in radio was moving away from what I called entertainment or programming-content radio into just music and brief talk. They had a rep firm, and the rep firm hired a consulting firm which moved the format to a minimum of talk. It was just time, weather and station IDs, and the rest was all music. That was not something I could have any fun in. I tried to make it work for about six months to a year, but it didn't. I finally gave up the ghost and decided to go into business for myself producing radio commercials for many of the advertisers I had been working for prior to that time in Chicago. Many of the major agencies, as a result of Chickenman and other things, had actually hired me on a free-lance basis to write and produce commercials for them, so I just decided to do it full-time.

RAP: What was your first major account?
Dick: Purple Martin Gasoline. That's where I dressed up the attendants in purple tights. They weren't getting any attention in the marketplace, and that got them attention. We did spots about the fact that if you drove into certain Purple Martin service stations, you would see their attendants in purple tights and, boy, was that a job convincing them--the attendants, not the bosses--to wear the tights. The bosses liked the idea. They had hired me to do radio, but we extended it into the sites, and that turned it into a different kind of campaign. It got them an awful lot of attention--photos in the newspaper and so on.

RAP: Do your clients stay with you for a long time, or are you always shopping for new clients?
Dick: Our radio production business is a little different than the agency business because we tend to retain clients. I'd say eighty to eighty-five percent of our work is just the continuing business of working for clients who hired us the year before, the year before, and so on.

January 01, 1999 11749
By Jerry Vigil The evolution of effects boxes isn’t quite what it was many years ago when the furious race was on to see how many simultaneous effects one box could deliver and how many quality effects could be jammed into one...
Read More...
© 1988 - 2023 Radio And Production, LLC
Go to Top