This month's Tales of the Tape wraps up my visit with Gary Owens. Be sure to check out Part 1 in the January issue if you missed it!

Dennis: Where do you think our industry is headed? Will it continue to have some growth potential, or will it just always be what it is--that wonderful secondary medium, that omnipresent thing that's in the air?
Gary: Of course, it is now becoming a world of conglomerates, as you know. The mom and pop stores probably won't exist after a while. I think they'll always be in the smaller markets, but they can't compete with the promotion budgets of a giant multi-billion dollar corporation in large metropolis areas. That will be very difficult. But I think there will always be smaller stations where you can do what you want to do. If you want to play all polka music, you can play all polka music or whatever it is. 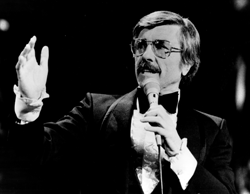 But I don't know that it's entirely bad. It's bad from the standpoint of ownership, but maybe not from that of being a disk jockey. As a disk jockey, you might actually benefit from it because you can go from one of the smaller markets in the corporation to one of the bigger markets of that corporation in a very short period of time where, otherwise, you may have had to make a lateral arabesque, a sideways move one or two years in a row. So it may not be entirely bad. It's just that it is a transmogrification. It is a metamorphosis. And it was Will Rogers who said, "I never met a morphosis I didn't like," remember? And he had no idea what that meant, nor did I when I said it.

Dennis: It was Groucho who said, "Love flies out the door when money comes in your window."
Gary: That's right. Incidentally, a CD that I cut with Groucho's voice tracks and all the Marx Brothers has been re-released by MCA. It's a new CD called, I think, "All the Best of Groucho." We did it in 1969, and we had a Grammy nomination. It was a nice project. I loved the Marx Brothers and W.C. Fields, too. I'm having lunch next week with a man named Will Fowler. Will Fowler is the son of Gene Fowler, who was W.C. Fields' best friend--best drinking friend--and editor of the New York Herald Tribune.

Dennis: So you must have also known Douglas Fairbanks because they all hung out together.
Gary: Oh, Douglas Fairbanks, John Barrymore, all of them. And that's the one beautiful things about Hollywood, just talking to these people. I'm just in awe, and I say the word "ah" a lot when I'm talking to them. When I first came to Hollywood back in the early sixties, what a thrill it was to work with all these people--to work with a John Wayne or a Charlton Heston. Of course, Heston is still with us, but that's something you can't trade for anything. I worked with Jack Benny. Jack Benny was very, very nice to me, one of the nicest people ever. Jackie Gleason. I'm working with Steve Allen Thursday night of this next week. We're doing a live broadcast from L.A. City College, and Paul Winfield, the great actor is partaking in it.

I owned a company with Mel Blanc for twenty years and with his son, Noel, and it was such a great, great time to be with Mel because Mel was my hero when I was a kid.

Dennis: I've met people who said he was a real tough cookie. Is that true?
Gary: Not really. He had a mind of his own, but he was a dear man to work with. He was just great. He had the biggest vocal chords of anybody. He never had a sore throat in all those years. My wife and I have two boys, Scott and Chris, and when they were six and three years of age, Mel, on two separate birthdays, did the voices of every Warner Brothers character saying, "Eh, hi Chris, hi Scott, happy birthday." You know, Sylvester and Tweety Pie, the Tasmanian Devil, Foghorn Leghorn, Speedy Gonzalez....

Dennis: Of all the people in the industry, he's the one I worship and adore the most. I've got that wonderful drawing that they did when he passed away. Did you ever see that?
Gary: Oh, yes. As a matter of fact, I met the artist. I was one of five people speaking at Mel's memorial service at the Directors' Guild in Hollywood, and there was a very bright young man there. At the time he drew that, when Mel died, he was probably about twenty-nine years old. Everybody thought it was a longtime Warner Brothers artist who did that. No, he was a very young man. He just was very taken by Mel. At that same event, Kirk Douglas spoke, Walter Matthau spoke, Noel Blanc and myself were speakers, and then an executive with Warner Brothers Cartoons spoke.

Dennis: One of the things that struck me as being wonderful about speaking with you as we were setting up this interview is that even though you're somebody with "stature" in the business, you come across as being a very humble and sincere person and appreciative for what you've achieved. Yet you don't seem detached from people as maybe some other famous people may be. You seem very enthusiastic. What's your philosophy about that?
Gary: I guess my philosophy is basically the philosophy I've had all my life. I treat everybody equally. I like people, and I will always give time to anybody, certainly in our business. And it's my pleasure to chat with you. But that's always been the way I've been. I don't like phonies. I don't like people who have a facade for one thing and then turn around and don't have time for people on the other. I grew up in a very tiny area, a little town of six hundred people and there is that Midwestern kind of quality, if it is a quality, that you just chat. You know, there's nothing wrong with that, and if a person shakes hands with you on a deal, that's the deal. You don't need a written contract or anything like that.

Dennis: I'm sure you've had a few written contracts though.
Gary: Oh yes. When it really counts, yes you do. But, I try to treat people with the respect they deserve and I will always do that because I'm sort of a man of the streets, I suppose. But thank you for saying that. Let me kick this pebble over here.

Dennis: You're still on the air right now, aren't you?
Gary: Right. As a matter of fact I have a new deal I just signed this week for Music of Your Life. I'll be starting a new show in January, a national satellite show for Al Hamm and the Music of Your Life network, and I enjoy doing it. I guess I probably could have left radio twenty-some years ago in terms of that being a money maker for me because, thank God, the rest of my careers have done very, very well; but I enjoy radio, and it has been my first love all my life.

Dennis: Being a Production Director is a very difficult job. For some reason, it's not looked upon with the same reverence in a radio station as, say, a GM or a Program Director. Yet the Production Director is the one whose talent and creativity brings in the revenue. They've always been in this weird nether world between programming and sales. Any words of inspiration for those people?
Gary: If you don't have good production, you really don't have a complete station, ever. As you say, it's been looked upon as a liaison, rather than the entity it really is, and it is so important because those are the sounds that are used under station breaks, under station promotions. That is so important because that grabs the attention of the listener. So if you are giving away a fantastic prize, if you don't have the production sounds to go with it, it may not work. It is a very important field, and it's been vastly underlooked over these many years.

Dennis: Do you have any idea why that is, Gary?
Gary: Well, I think production people are taken for granted, which is wrong, but there are many areas where they are. It used to be before the great heyday of the Don Wilsons and so on that announcers were looked upon as just a part and parcel of a show. Yet, if it wasn't for the announcer on a television show, there would be very little actually taking place. I think that it isn't that they're giving it second class citizenship, it's something they just don't think about in the right accord, and that's wrong. I'm not sure why; perhaps it hasn't really been brought to the attention of radio owners. I believe that's probably it, and I don't know who the person would be to do that necessarily. But perhaps you guys need a new PR campaign or something because you do great work. I don't know, but it certainly has been consistent over the years.

Dennis: You heard from the man's mouth right here--he understands, guys.
Gary: I certainly do, because if it wasn't for--excuse me, I dropped my ring here. I have to blow the whistle here. It's a little Captain Midnight ring that I got when I was just a few years old. It's amazing that I had seven fingers on that one hand. I didn't notice that until now. I just got a couple of extras out in the parking lot at the Feldman Hotel where we're staying right now. But to be serious for a moment, production is an integral part of television and radio. I've partaken in that for all of my life, and I realize the importance of it. As a matter of fact, one of my jobs with Gordon McClendon was to create "exotics." Exotics were little things that just made people take notice. I would do a vacation in exotic Throop, Pennsylvania where the coal mines...

Dennis: Throop?
Gary: Throop. I probably mispronounced it, but yes, Throop is beautiful this time of year. The stalactites and the stalagmites are in bloom. I would create a listener exotic so people would say, "What was that about?" and they'd listen the next time. But somewhere within the framework, they'd hear the frequency and the call letters to the station. I'd do those kinds of things that are kind of left-handed compliments in a way, but they do bring people to listen and that's what it's all about. It fulfills a need, an indescribable need, and that's what you guys are so good at.

Dennis: So what would you say to those people? Hang in there?
Gary: I would certainly, yes. Especially if I were Judge Roy Bean I'd say hang in there. Which he did on many occasions. Stick with it because things will get better. I think people will pay more attention, thanks to Radio And Production. That's part of it, too. You're getting a forum right there. A forum is two tu-tums isn't it? I believe so, yes. Thank you.

March 02, 1991 20334
Appropriately named a Master Dynamics Controller (MDC for short), ART's new MDC-2001 packs all the dynamics processing you could want on one neatly designed, single rack space unit. You get what you would expect from a "dynamics...
Read More...
© 1988 - 2023 Radio And Production, LLC
Go to Top