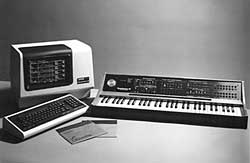 It's the superconducting supercollider of radio production and KIIS-FM was the chosen sight. New England Digital's "Tapeless Studio" made a home for itself in Los Angeles earlier this year. Now, nine months later, Radio And Production pays a visit to get an update on the production studio of the future.

For those still unfamiliar with "The Tapeless Studio", it's just what its title suggests, a multi-track studio using absolutely no tape. All recorded audio is stored in computer memory, Winchester hard disks or optical disks. The system consists of the "Synclavier Digital Audio System" which resembles a synthesizer keyboard, and the "Direct-to-Disk" multi-track recording system which uses a basic computer system complete with keypad, monitor, mouse and software to manipulate the audio. If you are unfamiliar with the system and would like to know more, New England Digital offers literature that will completely describe the system for you in easy to understand detail. Production Manager Mark Driscoll shares the latest in this interview with Radio And Production.

R.A.P. What's new with the system? Any upcoming changes?
Mark: We're working on a project which, in the next few months, will eliminate the keyboard and go to a 24" by 24" director console that is maybe 3 times the size of the average multi-track director on wheels. It will operate more by touch, sight and function, compatible to broadcast application rather than music. Right now it's in a very digital form. We will be testing some of this equipment this weekend.

R.A.P. Did you find the system difficult to learn?
Mark: The system is very difficult to learn. It's not a walk in and learn it today type situation. Almost a year later there are still areas which we are exploring. We have stopped attempting to break down some areas that we felt didn't benefit us or were not time efficient compared to the analog procedures we already use. So yes, the system is difficult to learn, in its present state. I think that when NED and other companies start formulating more user friendly systems, less musician and more broadcast oriented, with control panels more like what we're familiar with, it will get easier. NED is designing a new control panel utilizing 2 Macintosh computers which will replace the keyboard and will be considerably smaller in size and cost and positively more user friendly, therefore making the system easier to learn.

R.A.P. What percentage of production is now being done on the system?
Mark: I would say 30 to 40 percent of the "kind" of production that we would use the Synclavier for. We don't use the "tapeless workstation" yet on the other normal commercial production. We use it exclusively for our promos, sweepers and high impact projects where we have time to work. Right now it's a big part of our "bells and whistles" and as far as its adaptability to normal commercial production, it has a fantastic future to it.

R.A.P. Did you have some computer and/or musical background before the system was installed?
Mark: I don't think a computer background will ever hurt you, I had some and so did the engineers here at the station. Paul Donahue, Gannett's Director of Engineering, has a tremendous background in computers as do some of his assistants. They were all very good to have around. None of us really has a tremendous musical background, which was good, because the problem with training on the Synclavier is that most of the people that know it are all musicians and when musicians try to teach you how to use the Synclavier, the first thing they want to do is go to the sound timbre, which has all the sampled musical instruments, and they want to immediately make a song and that's not what we wanted, although we've experimented with making jingles and music. It's great if you have an in house musician and the time, if you want to do that, but there are so many great import sources that are available to us that we don't need to spend that time composing our own tracks.

R.A.P. How well has NED's training worked for you?
Mark: We couldn't have done it without them. I think that Gannett's and KIIS's training for them has worked at least as well for them as their training has worked for us because we had to teach them how to adapt to broadcast needs. They were primarily serving the likes of Frank Zappa, George Michael, and Stevie Wonder and now they're starting to deal with sets of call letters.

R.A.P. Who else at the station is using the system and how have they adapted to it?
Mark: My assistant Greg Orrante. I think between us we stumble, survive and then succeed together. Because he is a studio engineer, the responsibility is starting to shift towards him because my responsibilities are placed elsewhere. He's adapted to the system very well, but we were sort of forced to adapt to it very quickly. The more time you have to spend with it exclusively, the better, but while we've had the "Tapeless Studio" at our disposal, we've also had a full schedule of work every day. So we were sort of going to school at one end of the building and acting out our other duties at the other end of the building and for some time it was a little hectic. It really doesn't seem to end because you can't seem to put a cap on the technological advances in our industry. Every day someone is turning out something that's beating out what you just bought last week.

R.A.P. What was your studio setup before the "Tapeless Studio"?
Mark: Multi-track and two track was our prior setup; 8-track plus an array of two track machines and two or three other studios that are all two track and pretty traditional.

R.A.P. Have you reached the point where "tapeless" production is faster?
Mark: Yes in some ways, no in others. Our goal is always to say, "is it a timesaver". At this point it has not beaten our time factor and that's mostly because of the laborious task of going from one program to another, from one computer field to another computer field and one file to another file. It's sluggish in that area and I think with the new panel we'll find that it'll go much faster. Now, once you store some things in the files like jingles or voices that are used over and over, then yeah, it's a little time saving in that aspect. If you took a high speed multi-track production team fighting a tapeless studio as ours is now, I believe the analog guy will beat the digital guy in any horse race. In its present state it can't be considered a time saver because it's not designed that way. In the state that it will be in, it'll be a workstation that will be compatible with what are needs are.

R.A.P. Say you have a 30 second voice track and you want to edit the middle 10 seconds out, how easy is that?
Mark: Very easy. It's just a matter of what we call cut and paste. A screen comes up and shows you the modulation or a sweep of the sound and with the mouse you click over to the spot you either want to take out or slide somewhere else, click it and then you wipe across the screen over to the point where you want it to resume, and click out. As you sweep across the screen you hear the audio. That certainly is a nice feature and you'll never find anybody that can splice tighter than that.

R.A.P. What do you see as the future of the "tapeless studio"?
Mark: I think within the next five years there's going to be a lot of radio stations that will be using this as much as any musician has been using it for the past four years. Stations that have the money to spend and have the foresight and developmental intuition will jump on it very quickly, and those stations that wait ten years to get into it will find themselves very behind the times. I would say it will take a good three years before it'll become something you'll see often in lots of radio stations. The big price tags on equipment like this and the fact that it is somewhat futuristic and a little scary may hold some people back, but I know right now that there are other major broadcast facilities that are looking at this stuff and saying, "Hey, this is the way to go". I think it will definitely replace analog in the very near future.

R.A.P. What capabilities for usage of the system on the air and with Traffic and Accounting are being explored?
Mark: A year ago we were discussing these things and it's very hard to say where we are right now. Looking a little bit further down the line, you're entire music library could be put into the Direct to Disk system and, in its most futuristic form, your traffic operation, your logging operation, your music programming and actual music, and your commercials could all be housed and accessed simultaneously. We know these things can happen. How to make it happen without a tremendous amount of crashing is the question right now, but the capabilities are limitless.

R.A.P. Please give us some final thoughts on the past year at KIIS.
Mark: There's no way to say that this is an easy, super friendly experiment. It's been tough, a lot of it uphill, but in no way, shape or form do you find it to be anything less than exciting and something that is a tremendous quantum leap into the future, which is now. Being afraid of it and running away from it is only putting it off. You might as well jump into it. I'm very glad and very grateful that we were capable and chosen to be the guinea pigs of the industry to get with it, because we're a year ahead of everybody and already on the next plateau of new design and new use throughout the radio station. ♦