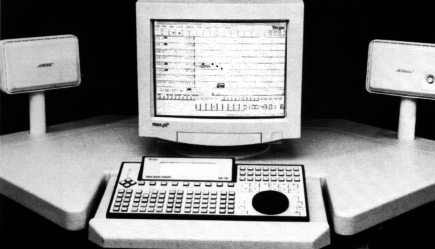 Computer Concepts Corporation is best known for their DCS digital commercial delivery system. Recently, Computer Concepts began expanding their products and services, and part of that expansion included the addition of the DAW-80 Studioframe digital audio workstation to their arsenal. Studioframe is a Pentium PC/Windows-based system developed by TimeLine Vista, Inc.. Like most digital multitrack systems on the market, Studioframe was designed with many features for video post production and music production. This review will focus mainly on those features of the Studioframe that apply to radio production.

The Studioframe is a very versatile workstation offering a variety of possible configurations. The configuration Computer Concepts is pushing for the radio market is an 8-track version, though additional tracks can be added in multiples of eight up to twenty-four tracks. An internal digital patchbay lets you configure the eight analog inputs and outputs and the AES/EBU digital stereo I/O in whatever manner you desire. If you have an 8-buss mixing console, use the busses to feed the eight analog inputs, then send each of the tracks to the eight analog outputs. Or, as was the case with the unit shipped for this review, the Studioframe can be configured to use its own internal digital mixer with two of the analog inputs used for all input signals, and two of the outputs used for the stereo mix output. Two more analog outputs can be used as effects sends with four of the remaining inputs used as stereo returns. There are numerous possibilities, and this versatility is present throughout the system.

Needless to say, with such flexibility and tons of bells and whistles, the manual for the Studioframe is not a quick read. It's two inches thick in a 3-ring binder. Fortunately, I had the opportunity to get started on the Studioframe with a preliminary version of a "Quick Start Manual" being written just for us radio folk. Coming in at a sleek 1/8-inch or so, the Quick Start Manual gets the average multi-tracker up and running within an hour or two. However, once you get into the system, you realize just how much there is to it, and the original manual becomes the key that unlocks the full power of the Studioframe.

The guts of the Studioframe are housed in a three rack-space unit. The front panel offers nothing more than the power and reset switches and a 3.5-inch floppy drive, all concealed behind a hinged door with lock and key. The unit shipped for this Test Drive came with a 17-inch color monitor. The only other components are a trackball (or mouse) and the Digital System Controller, the remote control panel that duplicates most of the frequently used menu and keyboard functions and adds a scrub wheel and display.

All connections are made on the rear panel which includes ports for external drives, tape backup, balanced analog I/O, AES/EBU digital I/O, the mouse/trackball, monitor, keyboard, remote control panel, and a printer.

September 01, 2006 9993
by Steve Cunningham This month’s review tackles Wave Arts’ Power Suite 5 bundle, which arrived on my doorstep at half-price courtesy of a group buy on the logic-users.org website. You see, in an effort to find the best plugs at...
Read More...
© 1988 - 2022 Radio And Production, LLC
Go to Top