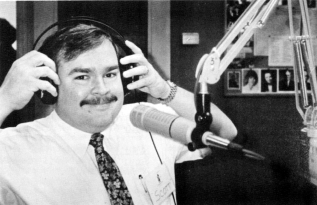 When we hear from someone who started in radio and eventually left to do their own production company, it's usually a process of many years in radio production before making the break. Scott Bourne made the break much sooner, and with a different angle. Instead of leaving radio to start a production house, he started a radio only advertising agency in the small market of Boise, Idaho. The agency eventually spawned 30:60 Productions, a production house, and success has followed Scott Bourne every step of the way. Whether you're at a station and want to improve your situation there, or want to leave the station and start your own business, or are already out on your own, this interview is filled with some very essential information for you. Read on!

R.A.P.: Tell us about your background in the biz.
Scott: In 1969 I went to work pushing a broom at WNAP in Indianapolis. Ever since I was a kid, I knew I wanted to do something with radio. At the time, 'NAP was an AOR station, and I wanted to be a rock and roller. I just went up there and hung around so often that they couldn't get rid of me. After begging long enough for something to do, they let me push a broom around, and I think they paid me twenty-five cents an hour.

Then one of the production assistants kind of took pity on me and started teaching me how to use the equipment, and one day a salesman came in and needed a dub, and nobody, but nobody, was at the station but me. And I knew how to make a dub. So, I dubbed one spot and saved the day, and they paid me a buck eighty-five an hour from there on. I worked there summers, part-time, and interned, then I joined the Army in 1972.

I went to work for Armed Forces Radio, and when I came out of Armed Forces Radio in 1974, I came back to Indianapolis and hung around 'NAP a little. It was clear that production was the way I wanted to go. Early on, I started trying to do as much production as I could. I free-lanced for several stations in town and then ended up going to KHCL in Paris, Arkansas. I went to work for them for a summer. This was a little, teeny, nothing town coming from Indianapolis, and I was the whole radio station. It was a little dollar-a-holler station in the middle of nowhere. The guy who owned the station basically said, "It's yours. You run it." This was Nowheresville. I think our TSA was nine, and I think the guy paid me two dollars and forty cents an hour. But it was good experience, and I learned to do a lot of things.

From there, my radio experience kind of got side tracked. I moved to Boise, Idaho in 1976 and started studying computers and engineering. Then I spent several years working at a station called KTSY, in Boise. I basically built the station. I did all the engineering for it. I ran it. I did the whole thing.

Then I did some volunteer work and put together this low power station, a Christian station called KRNP. In the middle of all this, it kind of dawned on me, based on what people were telling me, that I was pretty creative, and I got very interested in the concept of selling radio. But I didn't want to sell one radio station, so I started an advertising agency in 1979 called Visionary Advertising. Our primary focus was radio, and we represented all the stations in Boise, Idaho.

I did that for over ten years, and that's when 30:60 Productions got started in 1991. Visionary Advertising needed someone to produce radio commercials for them. So, I started 30:60 Productions, and its primary client was the ad agency. Instead of us going to some outside source for our ad agency, we decided to make it an in-house source. But because we didn't see enough business to justify the equipment, we wanted to make it a creative services kind of thing and make it available to the market.

They both had separate business licenses and were both owned by me, but they ran as separate companies. And other ad agencies actually hired me, in addition to my own ad agency hiring me. It was kind of a way to funnel the business to myself. We had a lot of clients in towns like Nampa and Caldwell and Boise, Idaho. We're talking extremely small market. Caldwell, Idaho has twenty thousand people. Nampa, Idaho has twenty-nine thousand people, and Boise has one hundred and twenty thousand people. You've got about two hundred thousand in the TSA.

It was really a small market, and the big challenge, of course, was trying to make a living when you're going up to a guy like Howard Schmitz of Schmitz Shoe Service. He's been in business thirty-one years, and you say, "Howard, you ought to be doing some advertising on the radio!" And he looks up and says, "Why? I've been here thirty-one years without advertising nickel one. What do I need to advertise for?" "Well, maybe you'd make three times the money!" So it was a rough go, but we paid for ourselves.

Then, in 1992, the whole focus started shifting towards 30:60 Productions to be the sole bread-winning company for us. We got really lucky and got a couple of big accounts. We did some stuff for Cellular One and Hewlett Packard, and that gave us a little bit of a name.