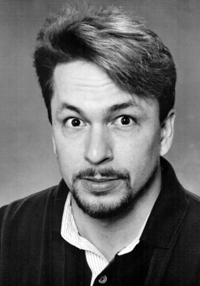 This month's interview takes us to the nation's second largest market and that market's number three rated station, KROQ-FM. This legendary modern rocker is emulated by modern rock stations across the country and probably outside the U.S. as well. It's not so much the music that's different; the music is available to everyone. But one can certainly say the imaging is unique. The creative production wizard behind the imaging of this super station is John Frost, a young man who left the "frosty" market of Anchorage, Alaska nearly a decade ago, and landed firmly in the production studio at KROQ. You'll enjoy this month's interview, and you'll love even more John's demo on this month's "Cassette!"

R.A.P.: Tell us about your background in radio.
John: I got started in Anchorage, Alaska when I was about fourteen and a half or fifteen years old pushing buttons for minimum wage at an easy listening station up there. I moved through five or six stations up in Anchorage taking little tiny jumps in salary with increasing duties. I was at an album rock station in Anchorage when I started to get really into production, and I started winning all the little Alaskan production awards, in which there's not a lot of competition. So, I ended up sending a tape to Tom Sandman at WBCN in Boston. Tom was my production hero at the time and was one of the greatest production guys I'd ever heard. I sent a tape and a letter saying, "I'm stuck here in Alaska. I have no idea how my production stacks up, and I have nothing to inspire me, no other good producers in the area. Please just give me a critique of what I'm doing right, what I'm doing wrong, and that sort of thing." I get a really good critique from him, but what really ended up coming from that happened six months down the road when Infinity Broadcasting, which owns WBCN, bought KROQ in L.A.. They needed a production guy, and Tom passed my tape on. I ended up getting the job, and I flew there straight from Anchorage. That was about eight years ago. I've been here since April, 1987.

R.A.P.: Tell us a bit about the history of KROQ.
John: KROQ was the first alternative rock station in the nation and was responsible for playing the first Van Halen song before that was cool. It was always discovering new acts back in its heyday around 1983 when Missing Persons and all those people were coming out. KROQ's always been a founder of new music and, really, a staple of the community here in Southern California. It has done well despite down times when alternative rock had just horrible music like in the '87 era. Even then we still did pretty well. But, with our current lineup and our current Program Director, who I think is the best in radio--and I don't know everybody, so don't anyone take offense to that--I mean, we're kicking butt! We're what used to be a niche format, and we're third in the market! The number one station is Spanish speaking and Power is number two. We've been number three or four, 12-plus, for the last two years or so. We never expected to get that high. We're not playing pop; we're not the Top 40 station. We're just real excited to be where we are.

March 01, 2005 7551
by Steve Cunningham My old faithful Yamaha NS-10M studio monitors are dying. I noticed that the foam surround in the right woofer is starting to crack, and Yamaha doesn’t make the woofers anymore. I suppose I could look on eBay...
Read More...
© 1988 - 2023 Radio And Production, LLC
Go to Top