How many tracks does it have? Perhaps the most unique aspect of the MicroSound is how it treats the idea of "tracks" as we're used to thinking of them in a multi-track environment. If you want to talk in terms of tracks, the MicroSound is a 100-track digital workstation. Yes! Of course, you can only record two tracks at a time (or four if you get the four I/O configuration). But, the MicroSound will mix and playback up to one hundred mono tracks or fifty stereo tracks. Look at the picture of the Project Screen on the next page. The segments placed in a stair step fashion are each on their individual "track." Assuming those are all stereo segments, the "stair step" can continue downward to fifty "tracks." What does this mean to you, Mr. or Ms. radio production guru? I produced about fifty separate projects on the MicroSound -- promos, commercials, etc., none of which were remarkably complex. I never needed more than eight of these "tracks." I recorded everything in stereo (including voice tracks), so, of the hundred tracks available, I used sixteen during the most complex production. You won't run out of tracks. Next question. 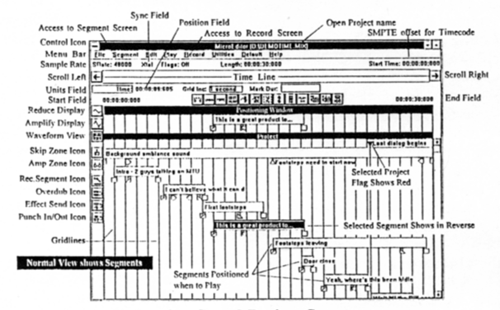 What can you do in this Project Screen? Get comfortable. This is where the power of the MicroSound resides. If you're familiar with MicroSoft Windows, then the top portion of the Project Screen will look pretty familiar. The very top line of the screen displays the project name as a "mix" file which you supply with an 8-character name. The system supplies the ".MIX" file extension. The next line below the project title provides a menu of options, most of which, when selected, provide another "pull-down" menu of additional options. Use the mouse to "click" on File to start a new project or open an existing project. This is also where projects and sound files are stored and retrieved from DAT backup.

Let's assume we're starting a new project. It's a donut jingle requiring twenty seconds of voice-over in the middle. First, record the jingle into the project by clicking "Record" on the menu bar or by clicking the Record icon to the left of the screen. The Record Screen appears. Click "File" to name the sound file you are about to record. Again, you have up to eight characters for this name. The ".SF" extension is supplied by the program. (The program also works with "Wave" files.) The center of the Record Screen displays VU meters complete with clipping indicators. Below the meters are seven "transport buttons." They are: << (Rewind), Enable, Record, Stop, Pause, Play, and >> (Fast Forward). Click the Record button and the unit begins writing whatever audio is at the inputs to the hard disk, in this case, our donut jingle. Click the Stop button to stop recording. Pressing the Space Bar on the keyboard will also stop recording. (This is probably as good a time as any to say that there are several ways to accomplish many tasks on the MicroSound. The advantage to this is in being able to pick the one you find easiest or fastest for you.)

Now, our donut jingle is in the system, and it's time for the voice-over. We can exit the Record Screen at this point and use the system's Over-Dub function to record the voice track "live" into the project, or we can stay in the Record Screen and record the voice-track without listening to the jingle. As long as we know how long the donut bed is, this is no problem. Let's record the voice-track without using the Over-Dub feature. When done, click File from the menu bar and click Exit (just one way to exit this screen). This returns us to the Project Screen where we click Segment and choose Create Segment. The Segment Screen appears. We select the sound file containing the jingle and place it in the project. At this point, the MicroSound gives you several options, one of which is the option to assign a name of up to thirty characters to the segment. Otherwise, the program automatically assigns it the name given to the sound file when it was recorded. The advantage of renaming it at this point is that you aren't limited to an abbreviated 8-character name for something that might require more characters for a better description. For our example, we'll call this segment "McDonalds Donut Jingle." On the project screen, the jingle will appear as a horizontal bar with its title to the far left of the bar. Do the same procedure with the voice track to get it on the project screen. Now, let's put the two together.

December 01, 1997 23630
by Jerry Vigil The abundance of hard disk multitrack recorders on the market today gives the buyer lots of choices, each one having features and functions that set it apart from the rest. The trick is to know what you need in a...
Read More...
© 1988 - 2022 Radio And Production, LLC
Go to Top