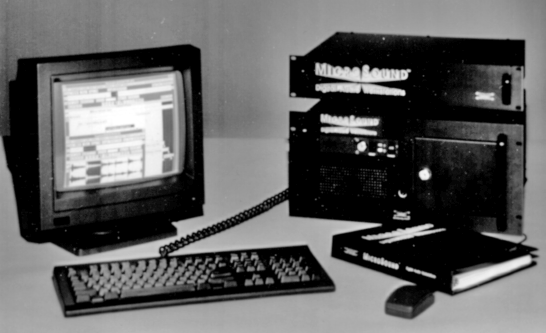 Your station has just approved the purchase of a new digital audio workstation for your production studio. Since you are the person who is going to have to use it day in and day out, YOU get to pick the one you think is best for your station. What do you do? Which of the many systems now available do you select? How do you narrow your choices down? Where do you begin? Whew! Thank goodness this is a decision you won't have to make every week, or even every year! Ideally, you try out every system available for at least a month with no obligation to buy. Unfortunately, this could take a few years, and considering the cost of these babies, most manufacturers don't have a few dozen demo units sitting around waiting for someone to borrow for a month or two. So you check out the reviews. You talk to people in the RAP WorkStation Network. You get as many demonstrations as you can, and as much hands on time as possible. Given some thought and time, you can make a wise choice and be happy with your decision for years to come. Should the MicroSound Digital Audio Workstation from Micro Technology Unlimited be on your list of DAWs to consider? Definitely.

The MicroSound is a hard disk-based system running on an IBM Windows platform. The hardware consists of the computer, the I/O box, color monitor, keyboard, and mouse. The price tag of the MicroSound varies according to the configuration ordered. A healthy system like the one used for this Test Drive retails for around $13,000.

Many radio stations are equipping their production studios with workstations offering dedicated control panels to eliminate a lot of mouse and keyboard functions. Initially, I expected the lack of a control panel on the MicroSound to be a weakness. As it turns out, mouse and keyboard functions are not as awkward and confusing as expected, and the MicroSound is even capable of doing some things faster than systems WITH dedicated control panels. So, throw out any old notions about mice and keyboards being the lesser way to go. The MicroSound makes production with a mouse surprisingly fast and rather comfortable for even the most computer shy producer.

There are three main screens used by the MicroSound: the Project Screen, the Segment Screen, and the Record Screen. Most work is done in the Project Screen. The Record Screen is the simplest of the three screens and is where the program takes you every time you record. Audio recorded to the hard disk is stored in "sound files." Entire sound files or portions of sound files are placed into a project and are called "segments." These segments are created from the Segment Screen where they can be edited before placement into the project.

February 01, 1992 3219
Marc Chase, Operations Manager, WFLZ-FM, The Power Pig, Tampa, FL This month, the RAP Interview checks in, for the first time, with an Operations Manager to get a side of production we haven't looked at before. And what better...
Read More...
© 1988 - 2022 Radio And Production, LLC
Go to Top