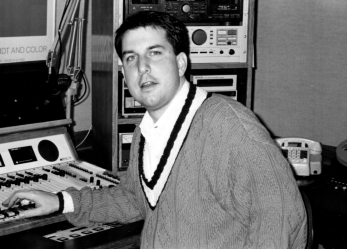 When was the last time your local newspaper came to you, wanting to do a story about you and the incredible promos you produce? Right. It's not the kind of thing that happens every day. But this is exactly what happened to Lonnie Perkins recently. What's so special about his promos and bumpers? Listen to this month's Cassette and find out for yourself, and read on and discover what happens when a news/talk station takes a successful morning man and hires him as their Creative Services Director. It's a magical combination that's working for everybody involved.

R.A.P.: How did your career in radio begin, and what brought you to WIBC?
Lonnie: I had a cousin who was interested in radio when I was ten or eleven. I kind of caught the bug from him and still blame him to this day for it. I would play radio with him. Then one day I went home and went out to the barn, grabbed some old scrap lumber and built a pretend studio in my basement. I scrapped together what I could and made a full horseshoe console and played radio in my basement for about five years. I got my first job when I was fourteen doing the coveted six a.m. to seven a.m. Sunday morning shift and eventually worked my way up to a full weekend shift at a 250 watt daytime directional blowtorch from a double-wide house trailer in Cave City, Kentucky. It was just about as low on the food chain as you can go; I had nowhere to go but up. At the end of the football season in my senior year I started doing afternoon drive at the local teeny bop station. This was at WOVO in Glasgow, Kentucky, and that's how I paid for college.

My experiences at those two stations were some of the richest experiences that I've had in radio, period. I wouldn't give anything in the world for the experience of working up through small markets, and I guess my young age helped out a lot because I didn't have to worry about responsibilities -- not that I do now. We'd do a lot of fun things like going in and setting a guy's newscast on fire while he's in the middle of the obituaries, things you just can't get by with in major markets these days. All those times are great.

When I was in college I'd work the seven to midnight shift and end up staying and playing in the production room until three or four in the morning doing production and cranking out promos and figuring out how to make a couple of wind-up 2-track decks sound like the stuff I was hearing on the big radio stations, and that experience has been priceless throughout my career -- developing that thought process and learning how to make do with nothing. I'm still doing that today!

Anyway, I skipped around in Kentucky radio for a number of years, and when I finished my degree, I got engaged and decided I needed to get serious about making some money. So I started floating out some air-checks and was trying desperately to get into Nashville. I got a call from the Group Program Director at WSM who said they didn't have anything in Nashville, but he liked my tape and wanted to fly me out to Oklahoma City and make me a morning star and revolve the entire radio station around me. I said, "Okay."

I was in Oklahoma City doing mornings for almost four years. Then I got anxious to get back closer to home and was talking to the guys at WSB, KMOX and WIBC, entertaining offers for whatever I could get. In some cases it was production, and in one case, at WSB, it was for afternoon drive. WIBC was the first one to come through with an offer, so I took it. I worked there for a year as a commercial production guy and was miserable. I was basically a dub monkey. But I told them I'd be there for a year, so I stayed the full year. Then I was offered mornings at WSM, so I went and did mornings there for a while. A couple of years later I got an unsolicited offer to come back up to Indianapolis as Creative Services Director, and here I am.

R.A.P.: It sounds like you spent more time as an air personality as opposed to a production person.
Lonnie: After almost twenty years in radio, this is my first real production job. I've spent about three years in production. The rest of the time, my focus has always been on the air. But the shows I did involved a lot of characters, and I basically did on the air what I'm doing now. It's just that instead of producing two, three and four minute bits that I could use once and then start all over again the next day, I'm doing thirty and sixty second bits now that I can use for two and three weeks. What a fool I was.

I've always had two first loves: one was on the air, and the other was production. I've always loved playing in the production room, playing with and discovering new production techniques. When I was fifteen and sixteen years old, I used to sit around and listen to jingle demos. I'd hear Mason Adams and think, "Jeez, I'd buy his mother if he tried to sell her to me. He's just the nicest guy in the world!" I would study his voice and try to figure out what makes him sound so nice and so warm -- what's the magic of his voice? And I'd study all these guys on the jingle demos. I'd study the national commercials that came in and what made them sound good. And in Oklahoma City and Nashville both, I usually did most of the station promos. So I've always had a strange fetish for the production room.

R.A.P.: You're the only Creative Services Director I've heard of where the local newspaper heard your work and called you up to do a story on you. That's pretty special.
Lonnie: Just shows you how slow news is in Indianapolis.

R.A.P.: After hearing your tape (on this month's Cassette) it's obvious your technical production is excellent, as is your voice quality. What stands out even more is the writing you do. I'm sure that's what stood out for the newspaper reporter. Were these writing skills developed as a morning air personality, or were they developed in the production room, writing commercials and promos?
Lonnie: A lot of it unquestionably came from the morning shows and writing bits and developing characters. My show was more than just voices. I had very well developed characters, and I did them live so I could interact with them. I cranked the stuff out day after day after day after day, and I did it all myself. I didn't have anyone writing for me, so I was fried to a crisp after three years. But it was a great experience, just cranking this stuff out.

With regard to promos, somewhere along the way I began noticing I could always tell radio production versus ad agency production. Even when I would be driving through a town where I wasn't familiar with the stations and the voices, I could tell what was local and what was agency. I was always intrigued by that and wondered why it was that radio production always sounds like radio production, and agency production always sounded like agency production. I always thought that if I ever did production, I would want my stuff to sound like ad agency material. So, I guess I approach promos from a concept basis instead of from the angle of real heavily produced stuff. There are two reasons for this. One, in my opinion, I think the concept-based stuff stands out more. It doesn't get lost as much in the commercial clutter because it's a little more cerebral, so people kind of latch on to it. And two, if everything is based on production, then I'm always vulnerable to the guy with the biggest toys. If the guy across the street gets a better digital unit or buys a better whoosh and zap package than I have, or has a superior s-s-s-sampler, then I'm out of luck. But, if I do everything in my head, then I'm not enslaved to the kind of equipment I have, and so my value is me. It just seems to offer a little better job security.

September 01, 1990 5196
by Jerry Vigil This month's Test Drive takes a look at a piece of equipment you as a Production Director might not use very often, but you'd call it one of the most valuable pieces of equipment your department has. The Fast Trac...
Read More...
© 1988 - 2023 Radio And Production, LLC
Go to Top